The author interviews several Gazans stuck in Egypt and other countries, herself included, who are unable to return to the Gaza Strip following the terrorist attack in Sinai and the subsequent closure of the Rafah crossing. 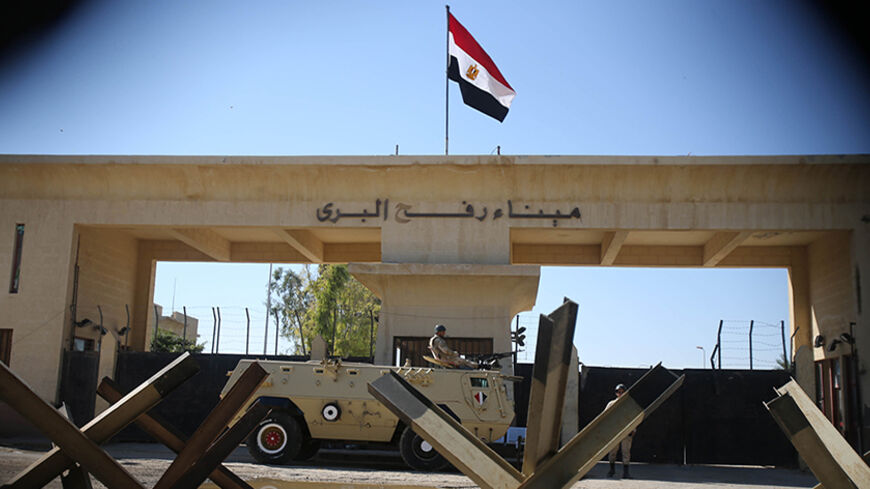 CAIRO — I had planned to travel with my son for two weeks, and got permission to take him out of school. I thought that this trip would make us forget about the last war on Gaza. But we are now facing an even harder reality.

Since Nov. 5, we have been stuck in a Cairo hotel room. We found ourselves unable to board the plane in Paris, as airlines flying to Egypt were instructed not to allow Gazans aboard. When we landed in Istanbul to take the flight to Cairo, we were mistreated. We felt like students being punished in school. We were ordered to stand to the side as the other passengers passed through the gate, looking at us curiously.

Now that we are in Cairo, we are trying to save our sorrow and money. I miss my daughter Zeina, who is 2½ years old. “The Old Man and the Sea” tale keeps coming back to me, as I feel like the fish that Santiago caught and brought to the shore as a skeleton. What makes it a bit easier for me is that hundreds of people are suffering just like us.

Abu Abdullah Tafesh stood in front of the Palestinian Embassy in Cairo with hundreds of other people who have found themselves stuck in Egypt following the closure of the Rafah crossing, and shouted, “Do not leave. Wait until we get a clear answer from the embassy regarding the crossing.”

Tafesh told Al-Monitor, “I want to go back to Gaza. My family and students are waiting for me there. I am a physical education teacher, and I have been stuck in Cairo for a month. I am residing at my relatives’ place, but I feel that they have had enough of me staying with them for so long.”

The Egyptian authorities closed the Rafah border crossing between the Gaza Strip and Egypt Oct. 24 for security reasons after 33 soldiers were killed in two separate attacks in the Sinai Peninsula.

Tafesh, who seemed desperate, said, “The embassy does not have any solutions to any of the crises.”

Again, Tafesh knocked at the embassy’s gate, just as Abu Ziad gave up doing the same. He sat next to his bags and told Al-Monitor, “We came here in mid-October for my father to get treated for a blood infection. Once the treatment was over, the crossing was closed. Since then, we have been moving between our friends and relatives’ houses, and we have the feeling that we’ve become a burden on them now.”

Abu Ziad noted that he does not have enough money to rent an apartment or get a hotel room, which costs at least $20 per day. Now, he has to carry his bags and sit with his father by the embassy’s gate. He went on, “I do not want any money or help. I just want to return to Gaza, to see my children.”

In an interview, Palestinian Ambassador to Egypt Jamal al-Shobaki told Al-Monitor, “Gazans are the victims of the terrorist attacks that took place in Sinai, just as the soldiers who were killed there.” He added that the closure of the crossing came as part of the military operation in Sinai, the site of a war on terrorism.

Shobaki added that the embassy is in contact with the Egyptian Ministry of Foreign Affairs. According to him, the ministry asked the embassy on Nov. 13 to provide a list of the Palestinians stuck in Cairo, in preparation for the crossing’s opening soon.

“So far, there are more than 3,500 people stuck outside Gaza, including patients, war invalids and illegal immigrants who are detained,” Shobaki said.

He pointed out that 800 people out of the 3,500 are stuck outside Egypt, as airlines did not allow them to board planes bound there. He added that all the airlines will be informed as soon as the Egyptian Foreign Ministry sets a date to open the crossing.

Shobaki explained that the crossing had not been closed since the recent war on the Gaza Strip until now. Yet, the attack against the soldiers raised fears for the safety of travelers, be they Palestinians or Egyptians. He repeated, “They are paying the price of terrorism that emanates from within the region, although I am not saying that it comes from Gaza.”

Asked about the exit mechanism for passengers, Shobaki answered, “The exit process will happen under strict supervision, in broad daylight and under security arrangements as the Egyptian security services on the ground see fit.” He stressed that they do not want the citizens’ lives to be at risk while being transported.

Shobaki said that as the Palestinian Authority (PA) takes control of the crossings and with the presence of troops on the border, the Rafah crossing will be kept open permanently. He added, “Hamas, as a fait accompli government in Gaza, knows that this is the Egyptian condition [for the crossing’s opening]. It is hearing it on a daily basis. Yet, it is not meeting these demands.”

I conducted interviews via Facebook with a number of people stuck outside Egypt, including Mazen Salem, a tradesman. He said, “I was stuck in China for more than 20 days. When I decided to return to Cairo, the Egyptian airlines prevented me from doing so, and I had to reschedule my flight. [Although] I have a Turkish visa, the Egyptian airlines wouldn’t even allow me to land at the Cairo airport to take a flight to Turkey.”

The same applies to Haneen Othman, a journalist at the Doha Center for Media Freedom. She was five months pregnant when she traveled to Qatar for training. She is now stuck there, and will soon be six months into her pregnancy. She may not be allowed to board a plane at all soon.

Othman told Al-Monitor, “I am pregnant with my first child. It is my first experience, and I am very scared. I need my husband and family by my side.”

A senior PA source, who spoke to Al-Monitor on condition of anonymity, expressed shock upon learning the number of Gazans stuck in Egypt and other countries. The source noted that the PA has given sums of money to large numbers of people stuck outside Gaza through the embassy in Egypt and provided medical referrals.

The source told Al-Monitor that the Egyptian authorities were considering opening the crossing for one day per week, but the director of the border crossings in Gaza, Maher Abu Sabha, a Hamas appointee, rejected this proposal in a statement to the media, which pushed the authorities to ignore the issue.