Israeli Prime Minister Benjamin Netanyahu is escalating the situation in East Jerusalem by announcing more construction plans that, even if not enacted, assure the stability of his right-wing coalition and head off talks with the Palestinians. 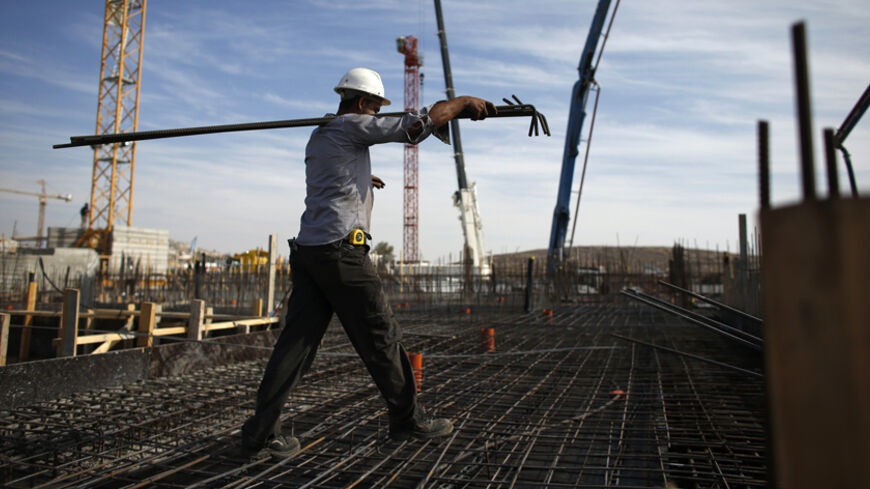 A laborer works on an apartment building under construction in a Jewish settlement known to Israelis as Har Homa and to Palestinians as Jabal Abu Ghneim in an area of the West Bank that Israel captured in the 1967 war and annexed to the city of Jerusalem, Oct. 28, 2014. - REUTERS/Ronen Zvulun

This time it was Israel TV Channel 2’s correspondent Amit Segal who provided the latest “scoop” about “new Jerusalem construction plans.” Segal reported Oct. 26 on the outcome of a dramatic meeting between Prime Minister Benjamin Netanyahu and Economy and Trade Minister Naftali Bennett. This was preceded by a series of reports about an ultimatum that Bennett’s HaBayit HaYehudi Party had presented Netanyahu with: construction in the settlements or demolition of the coalition.

Segal’s report was accompanied by an announcement from the prime minister’s office to diplomatic affairs correspondents regarding his intention to speed up the construction of 1,060 housing units in East Jerusalem, 2,000 in the West Bank and also several infrastructure projects there.

Peace organizations and human rights groups that assiduously monitor developments in East Jerusalem were poised to act. Foreign diplomats were quick to report to their respective capitals about the new spoke in the wheels of the “peace process,” which in any case is in a deep freeze. Spokespeople at the foreign ministries in Washington and Europe took out their standing orders to condemn construction in the settlements, which violates international law and runs counter to the spirit of peace. As expected, the Palestinian Authority was quick to declare the new construction plans as additional, damning evidence against the Israeli government, which keeps deepening its occupation while declaring its desire to end it.

It is no coincidence that the story was leaked, of all people, to Segal, who is well versed in the quagmire of party politics but is perhaps not familiar with planning and construction procedures. There was a reason the prime minister’s office deviated from its usual practice of issuing written statements about Netanyahu’s important decisions, and opted instead for telephone conversations with political correspondents (and not with correspondents who cover settlement issues).

Only on the day following the storm caused by the report did it become evident that other than a statement by the prime minister’s office, nothing had actually happened. No tender was issued, no plan was filed or approved, and no planning board was convened. The relevant agencies — Israel Land Administration and Ministry of Housing and Construction — did not understand what it was all about. Jerusalem scholar and attorney Danny Zeidman, who tried to unravel the mystery, told Al-Monitor on Oct. 27 that based on the number of housing units and the location of the construction — in the Ramot Shlomo and Har Homa neighborhoods — the plans were likely not new, but rather two plans that were initiated years ago and were put on hold. Approval of the plans will take years — if they ever are approved — given that a substantial part of the construction is planned on private land, complicating the planning process.

It is hard to believe that officials in the prime minister’s office were unaware of these facts, which were clear for all to see. One can assume that Netanyahu himself knew that what Jerusalem needs more than ever these days are firefighters, and not those lighting fuel. Hardly a day goes by without a barrage of stones thrown in Jewish neighborhoods in the eastern part of town and violence by right-wing activists against Arabs. Netanyahu likely understands that the commotion over construction across the Green Line is by way of being an own goal in the international arena, especially on the eve of the expected debate in the UN Security Council over acceptance of Palestine by the United Nations.

So why does the prime minister of Israel act against the interests of the State of Israel? No, Netanyahu is not an uncontrollable pyromaniac. He knows that flames in East Jerusalem are a sure-fire recipe for a clash with the Palestinians, termed in the Israeli media “disturbances.” A hint of a rumor about intentions to change the status quo on the Temple Mount is sufficient for Muslim religious fanatics to inflame passions. The more violent the clash, the more distant is the danger of negotiations, and the farther away a diplomatic process requiring, among other issues, a debate over Jerusalem is pushed, the more stable is the Netanyahu government.

The safety of the capital’s residents — in the East Jerusalem neighborhood of Pisgat Ze’ev, in Beit Hakerem on the western side of town and on the light rail that links the two — is at the heart of the Zionist consensus. Construction in “unified Jerusalem” is off-limits to Israeli political debate. Even opposition leader Isaac Herzog, in a tough speech he delivered at the Knesset Oct. 28, accused Netanyahu of “dividing Jerusalem de facto.”

Bennett promises on his Facebook page, “We will never stop building, developing and living in Jerusalem and in all of our land. It’s time our enemy internalizes this, it’s time that on our side people understand it, too,” while Livni warns on her Facebook page, “We are a step away from the danger that the national conflict will turn into a religious one,” and calls “for an end to the provocative declarations, irresponsible bill proposals, construction provocations and parties in the middle of the night to celebrate the takeover of homes in Muslim areas. … Israeli wisdom and patriotism mean stepping hard on our brakes, conducting ourselves responsibly and wisely and stopping a moment before it’s really too late.”

Livni’s words are, in fact, well grounded in reality, but, as we know, she is not a diplomatic commentator. So what is she doing in a government led by a man who spreads around inflammatory declarations, whose members promote irresponsible bill proposals and encourage provocations, construction and parties in the middle of the night to celebrate the takeover of houses in Muslim areas? The prime minister is playing with fire on top of a powder keg. Livni, as well as Yair Lapid, chairman of Yesh Atid, share responsibility for lighting the match.