To maintain the special Israeli-Jordanian ties, Israel should be sensitive to the internal pressures facing the Hashemite kingdom and promote a real diplomatic process with the Palestinians. 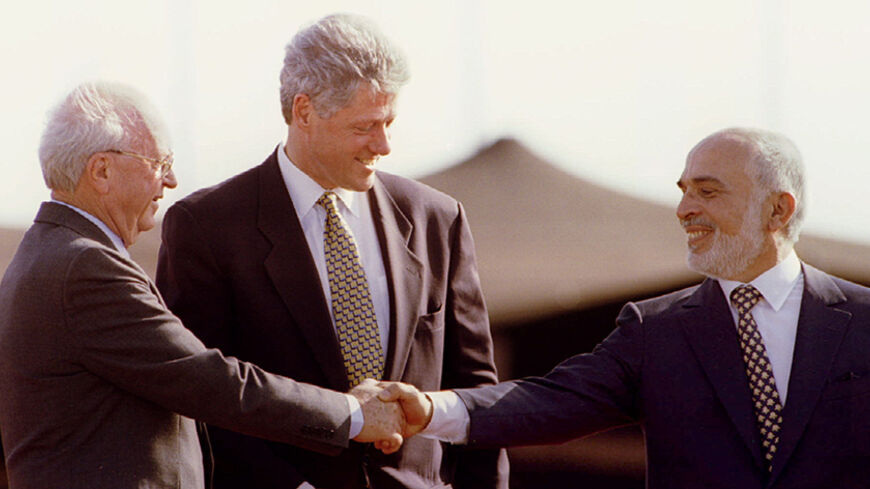 Israeli Defense Minister Moshe Ya’alon explained at length on the Oct. 20 edition of the US Public Broadcasting Service's "Charlie Rose" show why Israel does not have a Palestinian partner for a two-state solution. He suggested that the Palestinians set aside their aspirations for a state (“they have political independence”) and make do with autonomy, without annexed East Jerusalem and without Area C, which covers 60% of the West Bank.

The interviewer sought to understand how the position of the senior Israeli minister can be reconciled with statements emanating from Jerusalem about “new opportunities” that have opened up for Israel in the Middle East following Operation Protective Edge and the fight against the Islamic State (IS). How does distancing oneself from ending the conflict with the Arabs and Palestinians fit in with drawing closer to the Arab world in the Middle East? Ya’alon referred Rose to the speech delivered by Prime Minister Benjamin Netanyahu regarding diplomatic horizons, added something of his own regarding Israel’s desire for “partnership with the Arab world” and ended with, “We know how to take advantage of opportunities and to cooperate with those who are interested in doing so.”

An event that took place on Oct. 26 illustrates the link between perpetuating the occupation in the territories and regional opportunities. It also shows how disconnected the Netanyahu-Ya’alon government is from reality. At a Rabin Center event marking the 20th anniversary of peace with Jordan, the defense minister sat next to Jordan’s ambassador to Israel, Walid Obeidat, the only Arab ambassador posted in Israel. (Egypt has been represented for the past two years by a charge d’affaires.) An announcement issued by the Obeidat tribe on the occasion of Obeidat’s appointment as ambassador in September 2012, said, “Anyone accepting this post puts his hand in the hands of those who have worked to rob the land and kill and uproot Palestinians, … violating all prohibitions, crossing all red lines.”

Jordan has officially cut itself off from negotiations between Israel and the Palestinians, but the dominant Palestinian presence in the kingdom continues to connect between the Jordanian people and the occupied territories. King Hussein passed on this hot potato to Israel and the PLO, but the royal family did not give up Jerusalem and the holy Muslim sites. In an interview I conducted with him in October 2009 on the 15th anniversary of the peace between Jordan and Israel, the Jordanian monarch stressed that the agreement was signed as part of a process intended to achieve a comprehensive peace. He said the agreement provides his country with a special role in Jerusalem. And indeed, Israel has committed as part of the agreement to respect the present special role of the Hashemite Kingdom of Jordan in the Muslim holy shrines in Jerusalem.

Then, too, when politicians and right-wing activists stirred things up in East Jerusalem, the king warned that attempts to change facts on the ground in Jerusalem risk the relationship between the two states and could even result in a conflagration throughout the Muslim world.

In his book ”The Rise and Fall of the Warm Peace with Jordan,” professor Shimon Shamir, Israel’s first ambassador to Jordan, recalls the damage caused by Prime Minister Yitzhak Rabin’s decision in 1995 to expropriate land in East Jerusalem (which Rabin subsequently recanted). ”The opponents of peace jumped at the chance to sound off loudly against Israel,” Shamir wrote. Shamir terms the decisions by Netanyahu during his first term (1996-99) to open up the Hashmonaim tunnel (near the Western Wall) and to approve the construction of the Har Homa settlement across the Green Line “a slap in Jordan’s face.” As a 20th birthday gift for the peace with Jordan, Israel is now pushing forward plans to build hundreds of new apartments in Jewish neighborhoods across the Green Line. The opponents of peace in Jordan are finding natural partners today in IS.

In a position paper published on Oct. 26 on the website of the Institute for National Strategic Studies, Oded Eran wrote that demonstrations held recently by IS supporters in the southern town of Ma’an point to support for radical Islamic forces within the kingdom. Eran, Israel’s former ambassador to Jordan (1997-2000), warns that the third intifada burgeoning in Jerusalem will result in a wave of Palestinian refugees for Jordan — a development that could lead to an end of the Hashemite rule in the kingdom. It is safe to assume that this concern explains the direct line King Abdullah drew on Oct. 20 between the dangers of Islamic radicalization and that of Zionist extremism.

Eran agrees with Shamir that Israel has an interest in preserving the stability of the current regimes in Jordan and Egypt. That's why it must be sensitive to the internal pressures facing these regimes, especially by promoting a real diplomatic process with the Palestinians. Those who advocate for an opportunity to form a new Israeli-Arab front against Islamic fanatics must first deal with Jewish fanatics to protect the old Israeli-Arab front.

There is something symbolic about the venue and timing of the event marking 20 years of peace with Jordan. It took place at the center built to commemorate the peace legacy of the prime minister who paid with his life for his decision to end the conflict between Israel and the Palestinians, several days before the 19th anniversary of his assassination. The Oslo Accord, the one that Ya’alon and his friends on the right spare no effort to eliminate, is what paved the way for the peace agreement with Jordan.

In his speech, Ya’alon said that to maintain and strengthen the link between Israel and Jordan, and to bring the two people closer, “our duty is to act cleverly and wisely.” The minister therefore recommended avoiding unnecessary tensions at the holy sites and also “looking for unifying and connecting elements.” Is the encouragement of Jewish settlements in East Jerusalem, next to the holy sites, a wise and clever policy? Does the burial of the two-state solution and exhumation of the defunct autonomy idea unify and link the two people?

In October 2009, King Abdullah asked me where Israel wants to be within 10 years in terms of its relationship with Jordan and other Arab states. “Do you want your state to become a fortress, or to be integrated into the region? Without a two-state solution, what future is in store for all of us?” Five years have passed since then. Ya’alon and his friends are turning Israel into a fortress, pushing a two-state solution further away, undermining the relationship with Israel’s best friends and ensuring that we shall live by our swords in the future, too.