War and peace of Jerusalem

Jerusalem could become the world capital of peace, hosted by both Israel and Palestine, if the United Nations moved some of its agencies to the city, as suggested by a Palestinian policymaker. 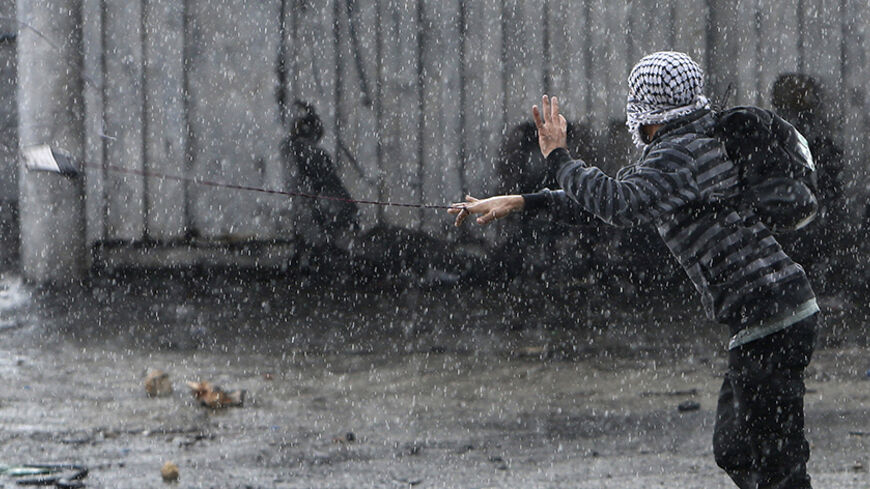 A masked Palestinian protester uses a slingshot to throw stones at Israeli troops during clashes, following an anti-Israel demonstration over the entry restrictions to Al-Aqsa Mosque, on a rainy day at Qalandia checkpoint near the West Bank city of Ramallah, Oct. 31, 2014. - REUTERS/Abed Omar Qusini

Former Prime Minister Ariel Sharon's visit to the Temple Mount in September 2000 was the trigger for the second intifada. Will the recent intrusion of Israeli settlers into the East Jerusalem neighborhood of Silwan ignite a third intifada? Possibly.

Clearly, all that is needed is a spark. In the Israeli-Palestinian equation, there is either a peace process or a process of violence. The vacuum created by the collapse of US Secretary of State John Kerry's diplomatic efforts was quickly filled with the Gaza war this summer and now with unrest in East Jerusalem and the West Bank. This violence is a result of a choice made by the Israeli government to prefer settlement construction over a historic two-state compromise.

The situation in Jerusalem holds the potential for a massive disaster. The holy city is the inner-core magnet of both national movements — Zionism and the Palestinian liberation movement — and of all three monotheist religions. More emotions and passions are invested in every square inch of Jerusalem than in any other place in the world. It has been the center of Jewish life for three millennia and the secret of Israel's rebirth. It is a sacred place for 1.2 billion Muslims and its mosques are the symbol of the Palestinian national struggle. Any compromise on Jerusalem would send millions of believers to the barricades. Yet, on the other side, a peace agreement on Jerusalem would have tremendous significance for universal coexistence.

This challenge was postponed for later on during the Oslo talks; all leaders and negotiators agreed then that Jerusalem would be the last issue to be tackled. This may have been a mistake. It should be clear to both sides that without a historic compromise on Jerusalem, peace will not prevail. Such a compromise would need much creativity and, above all, political courage. As long as the issue of Jerusalem is not resolved in a way that satisfies the basic interests and aspirations of both sides, it remains a ticking bomb at the heart of the Middle East. In a region brimming with messianic beliefs and radicalism, one cannot rule out political-religious pyromania setting fire at its core. Additionally, today's frustration and anger of Palestinians, and the zeal of Israeli settlers, translates into a dangerous conflict on the streets of Jerusalem.

One does not need much imagination to perceive possible doomsday scenarios emanating from Jerusalem. Therefore, even during the current tensions, one must reflect on possible solutions for Jerusalem, making it worthy of its name: the city of peace.

One such policy concept was shared recently with Al-Monitor by a senior Palestinian policymaker. It is based on the Clinton parameters, according to which Jerusalem will be shared in the following way: Israeli neighborhoods and Jewish holy sites to Israel, Palestinian neighborhoods and Muslim holy sites to Palestine; a logical but difficult surgery. Yet, for the "patient" to survive, it is proposed to add responsibility and pride to Jerusalemites of both nations. The proposal is to move one-third of the United Nations' institutions to Jerusalem, into a small area outside the city that would be under international jurisdiction. The UN agencies that could be transferred to Jerusalem include essentially the headquarters of all peacekeeping forces, UNESCO, UNICEF, WHO and UNTWO — all those agencies with relevance to international peacemaking. Such a move would transform Jerusalem into the world capital of peace, hosted by both Israel and Palestine.

Sharing Jerusalem is necessary. No single nation should have hold over a city so central to three religions and so mixed in population. Above all, it is necessary for Israeli-Palestinian peacemaking, as well as for a gradual pacification between the Muslim world and Israel. Jerusalem is the crux of the conflict for many Arab leaders, such as the king of Morocco, who has special responsibility within the Arab League for the future of Jerusalem. His senior adviser Andre Azoulay is aware of the creative Palestinian plan and told Al-Monitor, "It is worthwhile to explore, yet only when there are peace-seeking leaders on both sides."

Indeed, this is the condition. Prime Minister Benjamin Netanyahu knows firsthand from Palestinian President Mahmoud Abbas that the Palestinians will not agree to a border excluding East Jerusalem from the Palestinian state (except for the Jewish quarter and the Wailing Wall).

That border, on the basis of 1967, including East Jerusalem, is the key to any possible progress in the aftermath of the US' Nov. 4 midterm elections. That was made clear by Abbas himself in an Oct. 1 speech.

Kerry supports negotiations based on the 1967 lines to prevent a debacle over a unilateral Palestinian move at the UN supported by some European Union countries. The governments of the United Kingdom, France and Germany have expressed serious outrage about the recent Netanyahu decision to plan new housing in East Jerusalem. Senior EU officials in Brussels told Al-Monitor that the European governments also made a point of relating these sentiments directly to Washington. Yet, even for the Americans, Jerusalem is a "hot potato" that is too dangerous to place on the negotiation table. However, as the events in Jerusalem these days demonstrate, escapism from the most burning issues may actually set the region on fire. Therefore, political courage and creativity are in urgent order.