The participation of American Ambassador David Friedman in the tunnel-opening ceremony in Jerusalem undermines all his country's efforts at the Bahrain economic workshop. 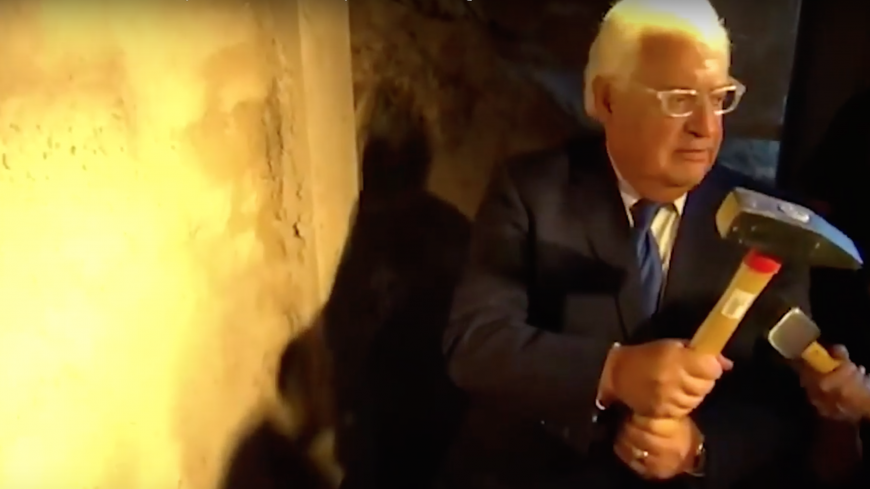 US Ambassador to Israel David Friedman participates in a ceremony in East Jerusalem inaugurating an archaeological tunnel in this screenshot from a video uploaded July 1, 2019. - YOUTUBE

“Bahrain was a step in the right direction,” special US envoy to the Mideast peace process Jason Greenblatt said July 1 at the annual conference of the Institute for Policy and Strategy of the Interdisciplinary Center in Herzliya. He was quick to clarify, however, “We are clearly not declaring a solution, yet.”

Israelis and Palestinians have long ceased holding their breath in anticipation/concern that Greenblatt and his associates will advance a solution to the Israeli-Palestinian conflict and end decades of bloodshed. After all, on that very same day, the special envoy, along with US Ambassador David Friedman, were guests of honor at a ceremony in East Jerusalem inaugurating an archaeological tunnel running underneath Palestinian homes. Both men assisted in breaking open a wall that was blocking the tunnel’s entrance. In fact, this controversial ceremony sounded the death knell for resolution of the conflict and provided a sure-fire recipe for bloodshed. Also present were Elan Carr, the US envoy for monitoring and combating anti-Semitism, and the US ambassadors to Portugal, France and Denmark.

Speaking at the ceremony right after returning from Manama, where the United States presented the economic component of its plan for Israeli-Palestinian peace June 25, Greenblatt said, “Our goal is for every Israeli and Palestinian citizen to be able to sit with his children and grandchildren and go through this plan and ask whether compromises there are worth it.” Nevertheless, they need not bother reading the 60-page blueprint once it is unveiled. They will not find any idea that has not been attempted in the past or in any stillborn initiative. One photo from the ceremony inaugurating the tunnel that holds a section of the so-called "Pilgrims' Path" that led to the second Jewish Temple is more indicative of the truth than the thousands of words poured into the US plan.

The sight of the US ambassador surrounded by radical right-wing activists and wielding a hammer to break through a mock wall in one of the most volatile compounds in the Middle East raises two scary options. One is that the US administration is deliberately playing with a keg of dynamite, not caring about the risk to Israeli and Palestinian lives. The other possibility is that the White House has lost control over its ambassador to Israel, a fellow traveler of the settlement movement and of its patrons Sheldon and Miriam Adelson and the Netanyahu family, whose representative Sara Netanyahu was also honored with a hammer blow at the event in the Palestinian neighborhood of Silwan.

“The City of David brings biblical Jerusalem back to life," Friedman said at the event. "It enables every one of us to stroll the corridors where the ancient prophets of Israel gave voice to revolutionary ideals of freedom, liberty and human dignity, ideas which have become an intellectual and constitutional basis for our nation." It is hard to know which nation the yarmulke-wearing ambassador had in mind — the American one he was sent to represent or the Jewish one.

The stance of the American nation as represented by the president and Congress has always been, and remains, that the status of all the territory to the east of Israel’s June 4, 1967, borderline, including Jerusalem’s Old City, is part of the core issues to be determined in a permanent status Israeli-Palestinian agreement. Still, all the American dignitaries present at the ceremony, among them senior Senate Foreign Relations Committee member Lindsey Graham of South Carolina, provided a seal of approval to an Israeli foothold on land that, according to international law, is not under its sovereignty.

As the anti-settlement Peace Now movement said in a June 30 statement, Greenblatt and Friedman contributed to turning Silwan and its 20,000 Palestinian residents (and 500 radical right-wing settlers) into “a messianic Disneyland of the far-right in Israel and the United States — several meters from the Al Aqsa Mosque and the Temple Mount.” The last time the Netanyahu government and then-Jerusalem Mayor Ehud Olmert broke into a tunnel in the same area, the ensuing September 1996 riots cost the lives of 100 Palestinians and 17 Israeli soldiers. Then, Israel opened the Western Wall tunnel, running under the Temple Mount compound.

The "Pilgrims' Path" tunnel, which is 850 meters (2,800 feet) long and 8 meters (26 feet) wide, was designed to expose an ancient Roman-era street that led from the Silwan Pool to the Temple Mount. Some of the underground digging was carried out several meters away from residents’ homes, opening up cracks in walls and sinkholes in many yards. Several Palestinian families have been forced to leave their homes after the city determined the structures were hazardous.

Right-wing nongovernmental organizations such as Elad and Ateret Cohanim that are dedicated to “Judaization” of the Holy Basin are essentially the long arm of successive Israeli governments (not only of Prime Minister Benjamin Netanyahu, who shared video of the ceremony on his Facebook page). At least 40 million shekels ($11.2 million) of taxpayer money has been funneled to the “Pilgrims’ Path,” a name that refers to the Jewish residents of the site some 2,000 years ago in the days of the Second Temple. The project’s ultimate goal is not to promote tourism to Jerusalem. As then-Jerusalem Mayor Nir Barkat put it in 2016, anyone who visits the tunnel “knows exactly who the boss of this city is.”

The use of Old Jerusalem archaeology for political ends is not new. Leading archaeologists who are members of Emek Shaveh, an organization of pro-peace archaeologists, have been warning for years of the disastrous repercussions for both Israelis and Palestinians of such exploitation. “It is inexcusable to ignore the Palestinian residents of Silwan, carrying out extensive excavations of an underground city and to use such excavations as part of an effort to tell a historic story that is exclusively Jewish in a 4,000-year-old city with a rich and diverse cultural and religious past,” the archaeologists wrote.

The blatant presence of official US representatives at an event so clearly identified with a certain Israeli political camp, less than three months before the Sept. 17 Knesset elections, provides an official imprimatur to the Trump administration’s involvement in Israeli politics. Its reaction to the participation of its representatives in an event held by the right-wing settler movement should have been just as harsh as if senior Israeli officials had taken part in an election rally held by friends of the US Democratic Party.

If Bahrain was a step in the right direction, as Greenblatt said, Silwan was a step in the opposite direction. When photos of the ceremony emerged, senior Palestinian Authority official Saeb Erekat tweeted, “We have to show this to everyone who took part in the Bahrain conference.” He was presumably referring to Arab representatives who condemned Palestinian President Mahmoud Abbas for boycotting the party in Manama. Erekat specifically singled out Friedman, whom he dubbed “a radical Israeli settler,” and Greenblatt for cooperating with the digging under the Palestinian homes.

Someone in Washington should quickly find a responsible adult to stop the digging under the interests of all sides, including the Americans, before the house of cards billed as “the deal of the century” comes crashing down.