Palestinians have not reacted to the wave of plans approved lately by Jerusalem's planning committee to build rabbinical colleges and a Jewish visitor center at the heart of East Jerusalem. 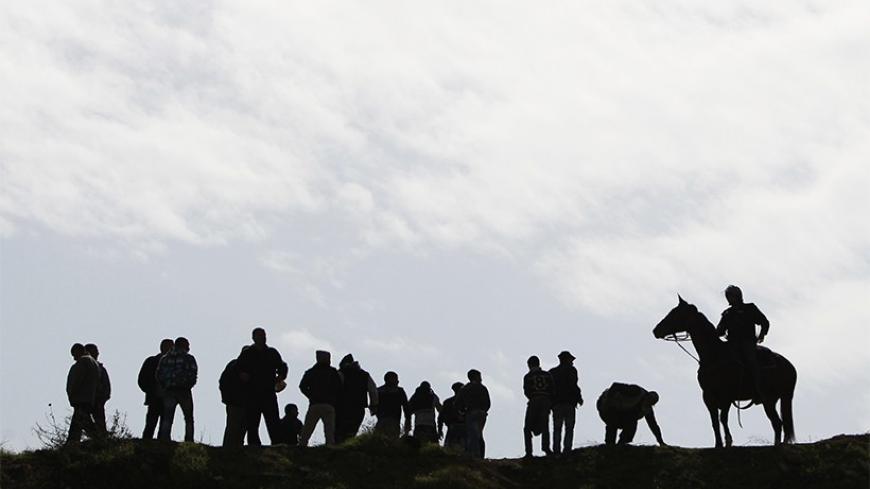 A mounted Israeli policeman (R) stands guard near Palestinians during clashes at a house demolition in the mostly Arab neighborhood of Silwan in East Jerusalem, Jan. 28, 2013. - REUTERS/Ammar Awad

In the shadow of the crisis in negotiations with the Palestinians, and at the height of the storm about the conviction of former Prime Minister Ehud Olmert, a dramatic decision was made in Jerusalem. This decision could bring about the collapse of the diplomatic process that’s hanging by a thread. The decision made on March 27 by Jerusalem’s District Planning and Building Committee makes the tender published several days later for the construction of 708 housing units in the city’s Gilo neighborhood look like a confidence-building measure.

The committee gave a settlers’ organization permission to erect a grandiose edifice in the upper part of the Arab Silwan neighborhood, adjacent to the walls of the Old City — in the heart of one of the most explosive sites in the world. A narrow road is the only dividing line between the complex, designed to serve as a “visitor center” for the El’ad Association and the Israel Nature and Parks Authority, and the Temple Mount, or Haram al-Sharif. Despite the fact that since the days of the British mandate, through the zoning plans drawn up under Israeli rule, the city’s planning principles forbade new construction within 75 meters (250 feet) of the wall, the committee approved a massive, tall building within 20 meters (65 feet) of the wall.

The building to be erected a stone’s throw away from the Western Wall would stand seven stories high. The ground floor would be spread out over 16,600 square meters (4 acres), three times the area in the original plan submitted some four years ago. As far as the Palestinians and the entire Muslim world are concerned, the erection of this building would be tantamount to sticking a Star of David on top of a mosque. Unlike organizations that approach the idea of erecting the third temple, El’ad has proven over the years that it does more than talking. Nothing stands in its the way of carrying out the plan to turn the Holy Basin into the central branch of the HaBayit HaYehudi Party (literally, “The Jewish Home”).

Prior to granting approval for the plan, with only a few restrictions, the committee members heard opponents from among the residents and a host of architects, archaeologists and public figures. In advance of the debate, David Kroyanker, a Jerusalem architect, expert of the city and recipient of the city’s Yakir Yerushalayim (worthy citizen of Jerusalem) award, was sharply critical of the plan. “I have known Jerusalem planning up close for 45 years, and I have never come across a plan of such arrogance and lethal potential as this one. I hope this plan finds its way to the rubbish bin of history.” Writer David Grossman, poets Haim Gouri and Agi Mishol as well as Israel Prize laureates and some professors appended their names to the list of opponents.

A review of newspaper archives reveals a common denominator between the timing of the district committee’s decision approving the plan and the timing of the announcement by Prime Minister Benjamin Netanyahu and Interior Minister Gideon Saar about its submission: Both events overlap dates of planned prisoner releases accompanied by threats on the part of HaBayit HaYehudi to dismantle the coalition. The announcement by Netanyahu and Saar about the plan’s submission was made in October 2013 — on the night that the previous (third) batch of Palestinian prisoners was released, provoking an outcry from the right wing. The decision by the District Committee was taken on the eve of the fourth stage of prisoner release — which was postponed at the last moment.

The site, called the Kedem Center, is not the only bone stuck these days in the throats of the Palestinians. Just two months ago, on Feb. 12, Jerusalem’s Local Planning and Building Committee approved the construction of the Or Sameah rabbinical college in the Sheikh Jarrah Arab neighborhood of East Jerusalem. That building, too, would be an expansive, nine-story edifice. That complex, too, is not intended for use by the Palestinian residents or by pilgrims. Here, too, experts submitted their opposition (in that case it was the city’s planning policy department itself), but they were struck down by the automatic majority of the right-wing municipal coalition.

And that’s not all. About a month ago, Ateret Cohanim, another settlers’ association active in the city, announced the acquisition of part of a building located at a central intersection in the heart of East Jerusalem. This is “a very large and strategic building,” bragged the organization’s director, Daniel Lurie, adding that “this is the first acquisition of its kind in an area that’s at the heart of the commercial Arab district of Jerusalem.” In a letter to potential donors, asking for their help in turning the place into a preparatory army academy, he said, “The work is being carried out quietly, under the radar.”

The three right-wing organizations, just like Housing Minister Uri Ariel of HaBayit HaYehudi, are making it clear to the Palestinians that as far as Jerusalem goes, the “Bibennett” government is not content with declarations. There is a complete coherence between what it says and what it means, as well as what its hand signs — the same hand that signs building plans and checks.

The publication of a tender for the construction of new apartments in the Jewish Jerusalem neighborhood of Gilo, across the Green Line, one of the neighborhoods that the Palestinians agree will remain in Israeli hands within the framework of land swaps, prompted a great uproar. It is hard to understand how three new outposts being planned in the heart of Arab neighborhoods have evaded the American radar. No less strange is the gap between the commotion by the Palestinian leadership over the Gilo project, and their restraint over the facts on the ground that Israel is creating in neighborhoods that they claim for their capital.

Putting up grandiose buildings in the eye of the storm, and populating East Jerusalem with Jewish rabbinical college students — all with full and official permission — are part of the city’s “Hebronization.” Just as in the “City Of the Patriarchs,” a government comes and a government goes, and settlers conquer another lot in an Arab neighborhood. A peace initiative is born, a peace initiative dies, and the right-wing activists laugh all the way to the bank account of another generous American donor. The “poof” (remark before the Senate Foreign Relations Committee on April 8) uttered by US Secretary of State John Kerry was no more than a slight wisp of air tickling their ears.