A well-known Iraqi scholar on Yazidis has burned all the books in his personal library to protest the ethnic cleansing of the minority group. 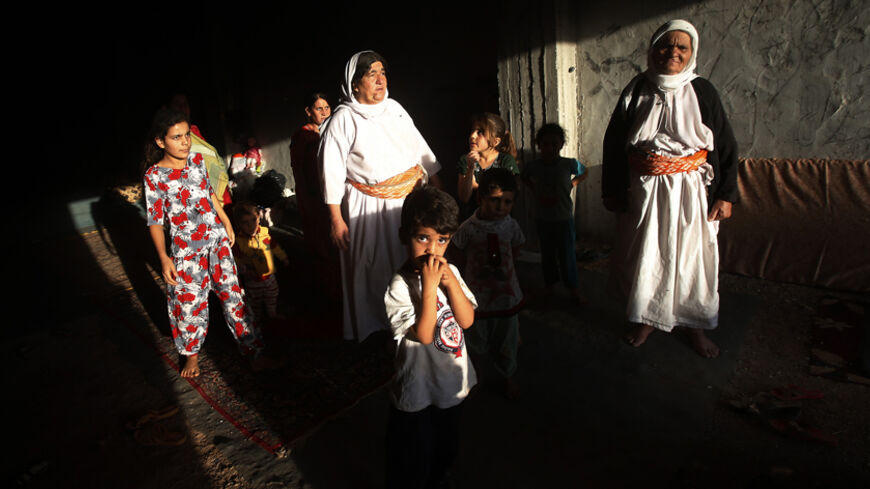 Displaced people from the minority Yazidi sect who fled the violence in the Iraqi town of Sinjar, wait for aid at an abandoned building that they are using as their main residence, outside the city of Dahuk, Aug. 25, 2014. - REUTERS/Youssef Boudlal

On Sept. 18, Bir Khadr Suleiman, a famous Iraqi writer and researcher, burned all the books in his personal library to protest the extermination of Iraq’s minorities. In Dahuk in northern Iraq, Suleiman gathered his books, and, in the presence of a number of his supporters, burned them while weeping over his many years of work.

Suleiman is one of Iraq's most famous researchers on the Yazidi minority, publishing nine books in English, Arabic and Kurdish over four decades. His work sought to present an authentic, more accurate image of the Yazidis and dispel prevalent stereotypes on the minority. His library contained valuable and rare texts on the Yazidis that he had accumulated over his long career, including his own works.

"I have devoted my entire life to describing the Yazidis and explaining that they are a peaceful people who follow a nonproselytizing religion; that they do not represent any danger to any other element of society; and that they want nothing but to coexist peacefully with others in their country, Iraq," Suleiman told Al-Monitor by phone. "I have faced serious difficulties over four decades of scholarly research. Some previous Iraqi governments banned the publication of my works, forcing me to stop writing in Arabic and move to Kurdish and English. In the end, I see that all of these efforts were not important. If the pen cannot leave a positive mark on our social environment, then it is better for these books and publications, which were unable to do what they were intended to do, be burnt."

Suleiman described his message as follows: “It is a religious message aimed at the extremist conflicts that have justified violence toward us for centuries. It is a social message to a hostile environment that has refused to coexist with us, and a political message to the local governments in Iraq and the great powers, which have failed to defend us, though we are in danger of being totally eliminated from our lands.”

He added, “What I did was a scream of protest that I directed to all of humanity. I burned my entire life’s work, hoping to reveal to the world the atrocity that is happening to Iraq’s minorities with the active participation of all factions.”

Saeb Khadr, the Iraqi prime minister’s adviser for minority affairs, told Al-Monitor, “Khadr Suleiman has worked since the 1970s to illuminate Yazidi culture to a wide audience. Today, he burned all of his works because he felt that his writing and defense [of the Yazidis] did not help them, and because no one stood by their side in their catastrophe.”

“[Suleiman] defended the Kurdish identity of the Yazidis to connect them to their social environment in northern Iraq, but Kurdish forces mobilized slowly and failed to defend their families and children, who were left to the mercy of the Islamic State (IS),” said Khadr.

There is a sense of widespread hopelessness among Iraq’s minorities, and a widely shared feeling of lost trust and abandonment.

Iraq's minorities are raising many questions about their situation and the world's stances toward them. Several minority groups feel that they are victims of a dirty game that is being played against them by regional and international powers. They question why IS was allowed for years to grow to become the monster it is today, and why were the borders of Syria's neighbors opened to allow the passage of thousands of fighters and weapons.

Shiite authority Ali al-Sistani met with an official delegation from the Yazidi sect on Sept. 9, according to Sistani's office. Sistani's office further told Al-Monitor that Sistani expressed his sympathy and solidarity with them in their adversity, saying, “The Yazidis are safe in our embrace.” The delegation presented a report on the Yazidis’ situation IS-controlled areas. These reports confirm that nearly 3,000 Yazidis were killed during the IS extermination campaign. The organization kidnapped thousands of Yazidis, including a thousand women, and tens of thousands of Yazidis have been displaced, finding themselves living in appalling conditions in the cities surrounding their lands.

The demands of Iraq's minorities are the same as Iraqi society at large, which does not want to see Iraq lose its religious and cultural diversity. Iraq's minorities, in general, want those participating in the so-called anti-terror alliance to play a more decisive role in confronting the danger of IS, and to return stability to their lands. This must be done through a comprehensive plan that would enable minorities to defend themselves in the face of possible new waves of terrorism. Further, the extremist ideas that are disseminated by certain parties participating in the anti-terrorist alliance must also be eliminated.