Desperate Yazidis are reaching out to Israel, asking for understanding and assistance, especially in the military domain for their fight against the Islamic State. 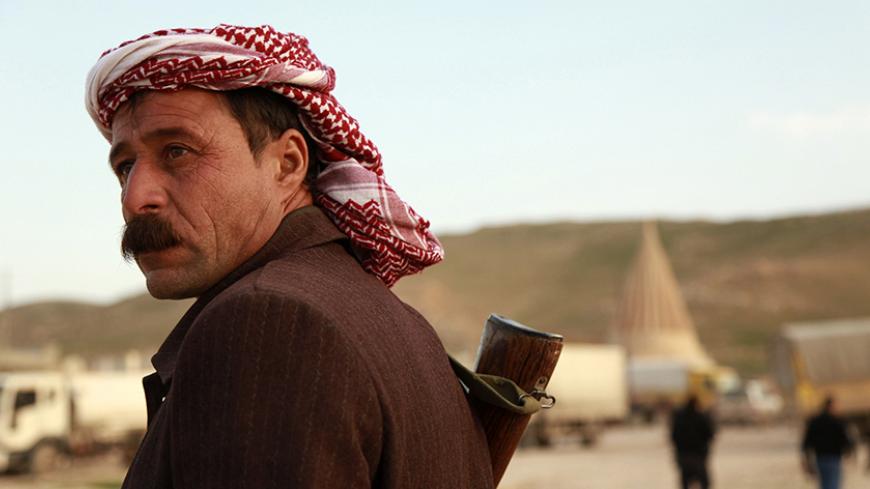 A man from the minority Yazidi sect stands guard at Mount Sinjar, in the town of Sinjar, Dec. 20, 2014. - REUTERS/Ari Jalal

“They have already killed many of us. What do we have to fear?” Lt. Col. Lukman Ibrahim responded when I asked him if he was afraid to openly communicate with an Israeli in a recent long-distance phone conversation from Tel Aviv to Sinjar, in northwestern Iraq, near the Syrian border. Ibrahim, a Yazidi militia officer, is hoping to obtain military aid from the State of Israel.

“The Arab countries do not recognize us, nor do they recognize you,” he said. “They are telling us that we are infidels. Why should we be afraid to talk to you, when even neighboring Arab countries have become our enemies? We regard you as a friendly state, with an opportunity for relations on the basis of neutrality and respect. We do not want more than that.”

Ibrahim, a journalist by profession, serves as an assistant to Marwan Elias Badl, one of the senior field commanders of the Sinjar Protection Forces, the Yazidi militia established ad hoc in August 2014 to halt the Islamic State (IS) onslaught against Yazidi population centers west of Mosul. The militia numbers some 12,000 fighters, most of them untrained, ordinary men who rushed to take up arms to thwart IS' designs. A few of them are rank-and-file fighters, while some are officers with the Kurdish peshmerga. According to internal estimates, the IS militants killed thousands in their pogrom against the Yazidis. About 5,000 Yazidis are still being held by IS.

The Yazidis have no formal relations with Israel, nor an organized leadership. Yet they need aid, in particular military assistance, and they have chosen to make a public plea for help. “We appeal to the Israeli government and its leader to step in and help this nation, which loves the Jewish people,” said Ibrahim. “We would be most grateful for the establishment of military ties — for instance, the training of fighters and the formation of joint teams. We are well aware of the circumstances the Israelis are in, and of the suffering they have endured at the hands of the Arabs ever since the establishment of their state. We, too, are suffering on account of them.”

When asked what kind of weapons they needed, Ibrahim cited protective measures. “We are not acting against anyone,” he clarified. “And we do not covet other people's land. We just want to protect ourselves. For example, [we need] armored [Humvees], machine guns and light weapons.”

Contact with Israel is a dirty business in this neighborhood, military contact all the more so. Be that as it may, in a reality where all levees have been breached and the worst appears to have already befallen the Yazidis, what could they possibly lose by seeking a rapport with Jerusalem?

The conversation with Ibrahim was not the only call with Sinjar. Majdal Rasho, a native of Sinjar, had settled in Germany and built his life there. He married and had a family, making a living as a manufacturing supervisor at a chocolate plant. In his spare time, he served as a photographer for TV stations broadcasting in the Kurdish language. He returned to Sinjar as a fighter, but also in his capacity as a video photographer for German TV networks.

“What I have seen here, I just can't describe,” he said by phone from a battle zone. “Our people had no choice but to flee. We are not Arabs, nor are we Muslims. We see ourselves as sharing a fate with the Israelis, who went through similar pogroms. Those besieged on the mountain approached me and asked, ‘Maybe our Israeli brethren could lend a hand?’”

Yazidism is a religion with no more than a million followers. Its adherents are centered around Mosul and the Sinjar mountain range, in northern Iraq. Their largest diaspora in the West is in Germany, estimated to number some 100,000.

A common destiny with the Jews is a recurring theme in the Yazidis' discourse. “What happened to us is the biggest genocide since the Holocaust of the Jews in Europe,” said Dr. Mirza Dinnay, a pediatrician based in Germany. “In the Holocaust, the goal was to annihilate an entire people, the Jews. IS has a similar plan — to exterminate an entire people, the Yazidis. No such extermination process had taken place in the past 500 years, with the exception of the Holocaust and what came to pass in Sinjar.”

Dinnay left Germany for Sinjar at the outbreak of the pogrom, leading a delegation of human rights activists. During one of the aid flights arranged by the Iraqi air force, a helicopter carrying food supplies and medication to the besieged Yazidis crashed. Some of the passengers aboard, among them Dinnay, were injured.

The communication between the Yazidis and the Israeli media has been coordinated by Idan Barir, 34, a researcher at the Tel Aviv University Yavetz School of Historical Studies. In the months since IS' offensive against Yazidi population centers, Barir has become Israel's top expert on the Yazidis, thanks to his extensive connections with members of the Yazidi community.

“I can think of a range of activities that Israel is experienced in that would not undermine the world order,” Barir told Al-Monitor. “For example, providing military assistance to the Yazidi forces in Sinjar who are crying out for cooperation and aid; setting up a field hospital for medical and psychological treatment of the casualties among the displaced in northern Iraq — not only Yazidis, by the way; sending humanitarian aid to displaced Yazidis in the refugee camps in Iraqi Kurdistan; absorption of a symbolic number of displaced Yazidis in Israel, with preference given to humanitarian, whether medical or mental, cases; incorporation of young Yazidis into military service in Israel; and support of civil initiatives aimed at strengthening and deepening ties between Israelis and Yazidis. It all depends on the decision made by the Israeli government, on its determination and goodwill.”

So far, Israel has not officially responded to such calls, which have yet to be fully formulated and have only recently began over the last few days. In fact, no formal request has come from the Yazidis for asylum as refugees. Barir is currently trying to find a way to reach decision-makers in Israel to pass on the messages from his faraway friends. Without a doubt, it is an unusual overture of friendship for the government of Prime Minister Benjamin Netanyahu, and it will be interesting to see if and how Israel takes up the gauntlet. Given the sensitivity of the matter, it is quite uncertain whether anyone will hear about it.

“It is a moral obligation to ring every bell and to do everything possible to stop the Yazidi tragedy,” said Attorney Zvi Hauser, the former Cabinet secretary in the most recent Netanyahu government (2009-13). “It is inconceivable that in the 21st century, someone's attempt to eliminate an entire people, because of its faith and religion, is met with indifference.”

Hauser is the first senior figure in Israel who agreed to comment on the Yazidis’ call for help. As a private person, he refrained from reference to the Yazidis’ request for military aid, taking care to say nothing that might be interpreted as a promise. He believes, however, that Israel should favorably consider the Yazidis’ calls.

“The Yazidi narrative is evocative of ours. We, too, went through 2,000 years of existence without sovereignty, in the course of which we faced extermination schemes,” Hauser said. “Israel is a sovereign state, formed by an ethnic minority. It is the national manifestation of an ancient civilization. It would thus be appropriate to examine ways to establish relations and forge an alliance with them, if only to ensure a pluralistic Middle East. This issue has a universal aspect, as well. The development of human civilization is contingent on the diversity and multiplicity of [ethnic] groups and nations. Hence, the extinction of one of these would hurt not only the Yazidis, but also the entire fabric of human life.”