Are relations between Iran, Egypt warming?

The rise of the Islamic State as a common enemy threatening Muslims from all sects explains the possible rapprochement between Iran and Egypt. 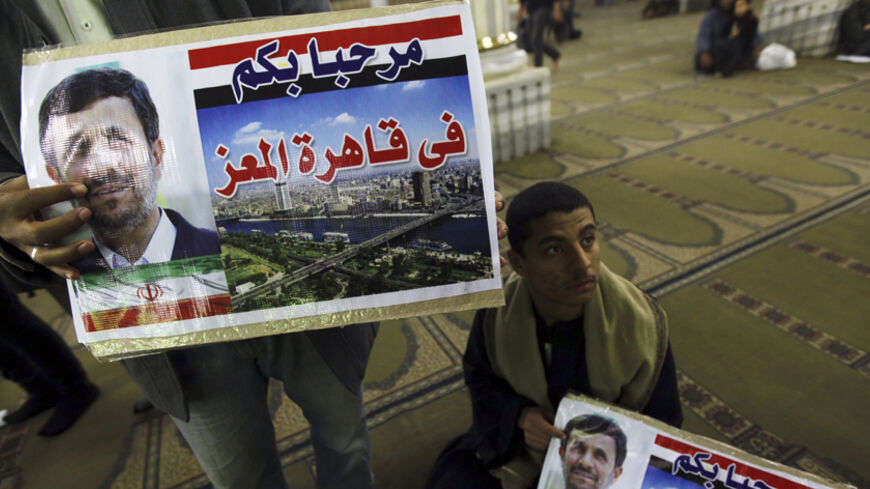 CAIRO — Ever since 1979, when Iran cut off ties with Egypt following President Anwar Sadat's signing of a peace treaty with Israel, each country has maintained separate strategies, nexuses and allies. However, changes in the Middle East over the past three years have forced both parties to consider new strategies to solve their long list of problems, which stand as obstacles to the development of relations between the two.

Perhaps the emergence of the Islamic State (IS) as a common enemy and a real threat to both countries has stirred the stagnant waters. Ali Akbar Velayati, former Iranian foreign minister and adviser to the supreme leader, expressed this idea during his meeting with an Egyptian media delegation in Tehran. "The Middle East without Egypt is nothing, because the vacuum left by Egypt when it is absent cannot be filled by any other state," he said. This explicit political courting of the Egyptian side sparked the curiosity of the media and political analysts alike.

Al-Monitor spoke with Ahmed al-Ghamrawi, former assistant to the foreign minister and current head of the Egyptian-Iranian Friendship Association. He said that IS is an American construct — the offspring of US policies to use extremist Islamist groups to strike communism at its base. Yet, according to him, the "magic turned on the magician" as these groups began to pose a real threat to the US presence, thus provoking a change in American strategy.

"In its capacity as a major player in world politics, the United States has opposed any Egyptian-Iranian rapprochement because it does not serve its interests. Decisions were, in fact, drafted to restore full Egyptian-Iranian relations during the time of Iranian President Mohammad Khatami and Egyptian President Hosni Mubarak. [These decisions] were to be announced in Cairo and Tehran simultaneously. However, the American side put pressure on Mubarak and this was halted," Ghamrawi said.

"Now, however, a rapprochement between Iran and Egypt is in the United States' interest, to confront the danger of IS and extremism in general, which in the near future will emerge from American society itself," he added.

Sheikh Ahmed Karima, a professor of comparative jurisprudence at Al-Azhar University, told Al-Monitor that ideology can only be confronted with ideology. “For this reason, we must extinguish the fires of fanaticism from which IS, al-Qaeda and Ansar Bayt al-Maqdis emerged through official Islamic institutions in the world, because these movements are the product of extremism in Sunni sects,” he said.

"Al-Azhar acknowledges the sectarian diversity in the Islamic world, including Shiite sects. It has relations with the Zaidi Shiite institutions in Yemen and the Jaafari Shiites in Lebanon, Iraq and Iran. This recently became clear in the inauguration ceremony for the grand mufti of Lebanon, where an Egyptian delegation headed by Grand Mufti of Egypt Shawki Allam and a representative of Al-Azhar met with prominent Iranian Shiite clerics in Lebanon. This was preceded by visits made by Al-Azhar scholars, Quran reciters and university professors to Tehran, in addition to media delegations," he added.

Karima said that Iran is not an enemy state of Egypt, noting, "It is a state with which we have neither direct borders nor any regional conflict." He said he sensed this during his visit to Iran, when he asked the Iranians why they named a street in Tehran after Sadat's assassin, Khalid Islambouli.

"The Iranians saw that Egypt has a street named after former Iranian Shah Reza Pahlavi, and President Sadat agreed to having Pahlavi buried in Egypt," he noted.

Karima asked, "At a time in which we have discussions with the Catholic Vatican, established the Bait al-Aila project with the Orthodox Christians in Egypt and have relations at the official level with the Israeli side, how can we reject dialogue with Shiite Muslims?"

He said that he would work in the coming days to revive a project for the establishment of a "house of rapprochement" between the various Islamic sects. In case he is unable to establish such a center in Egypt, he said that the most appropriate site would be Lebanon. According to him, Lebanon is known for the tolerance prevailing in the country between Sunnis, Shiites and all other sects, which would allow such a center to spread its values in the Islamic world.

Medhat Hammad, professor of Iranian studies and head of the Department of Oriental Languages at Tanta University, told Al-Monitor, "The confrontation with terrorist organizations, including IS, will not be the foundation stone for the return of Egyptian-Iranian relations. There should be a genuine political will for the return of relations between the two countries, represented by Supreme Leader of Iran Ali Khamenei and Egyptian President Abdel Fattah al-Sisi."

Hammad said that Iran's recent political courting of Egypt is only part of the picture. The remaining part of the picture, according to Hamad, is that Iran considers the events of June 30 a coup, not a revolution. Hammad said that Iranian media insult the Egyptian military, portraying it as stifling freedoms, dominating the affairs of the state and oppressing Islamic political currents.

If Iran wants a return of relations, Hammad believes it must explicitly announce that it is not concerned about Egyptian domestic affairs and that the Egyptian people have chosen a new political leadership to lead their internal agenda.

by Murielle KASPRZAK and Joseph SCHMID | AFP | May 26, 2022
END_OF_DOCUMENT_TOKEN_TO_BE_REPLACED