Anger among pro-government supporters spilled into protests in Homs last week after two deadly suicide bombings, but the Syrian government remains indifferent to their complaints. 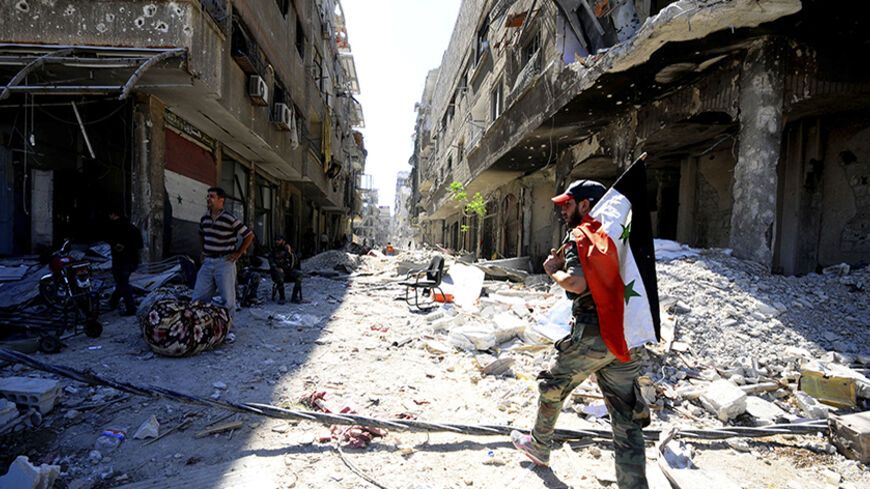 A member of forces loyal to Bashar al-Assad holds the Syrian flag as he walks on debris of damaged buildings in Dukhaneya neighborhood near Damascus, after the forces regained control of the area from rebel fighters, Oct. 7, 2014. - REUTERS/Omar Sanadiki
Edward Dark
@@edwardedark
October 7, 2014

In what was one of the more grotesque and horrific single incidents even by the standards of the overly brutal and bloody Syrian civil war, two suicide bombers detonated themselves on Oct. 1 outside a school in an area of Homs loyal to the regime, killing and wounding dozens, the majority of them children under 12. As the broken little bodies and school bags littered the streets, the hideous barbarity of such a depraved act began to sink in and sent shock waves through Syrian society, none more so than the community effected, which saw unprecedented protests the next day, openly targeting a ranking regime official for the first time: Homs Gov. Talal Barazi.

Those protests were born of a community at the breaking point, fatigued and worn down by years of a conflict with no end in sight and getting bloodier. The ugly mood is further exasperated by the perceived indifference of state media to their plight, a point made clearly in the commentary of a protest video posted online. Scathing criticism of state media coverage of war atrocities is nothing new, and reached a crescendo during the purges committed against Alawite families during the rebel takeover of Adra last year, and their abortive push into rural Latakia before that. But interestingly this time around, some regime reporters have chosen to show solidarity and break ranks with their media silence in an attempt to shed light on the issue, albeit in a private manner.

Another point of great aggravation to regime loyalists in many cities across Syria is the rampant unrestrained corruption and criminality of many of the paramilitary militias linked to the regime, like the Ligan Shaabiya and National Defense Forces, which loot houses and run checkpoints and are notorious for taking bribes to let weapons or wanted men through, or pocketing fees to allow trucks with legitimate cargo to cross. This toll bridge operation is what people in Homs have blamed for allowing the suicide bombers to enter what should have been a secure area. This anger was, of course, directed at the governor, who's in effect the weakest link in the regime’s ruling apparatus, overshadowed by all the other military units and security agencies over which he has no control.

But even this soft target is not a matter for negotiation by the regime, and he is still in place despite the outrage in Homs. According to a loyalist group, one of the governor’s entourage said, “All Homs might fall but the governor won’t.” To the regime’s thinking, backing down, even to its own support base, is a sign of weakness and is out of the question. In fact, the only officials who have been removed during the Syrian conflict were removed for disobeying orders or insubordination, never for corruption or antagonizing the populace. A famous case was Lt. Gen. Mohammad Khadour, the former overall military commander of Aleppo, notorious for his womanizing, thievery and incompetence, and much despised by even the hard-core regime loyalists in the city who blamed him for all the military setbacks there. He was eventually removed this August, but only after he fell out of favor with the top brass.

Yet, it would be foolhardy to read too much into all that and jump to conclusions and speculation, for although the suffering of regime loyalists is great and increasing — as is the case for all Syrians — there are a number of factors that help put these protests in perspective. For better or worse, the fates of the regime and its core constituency are inextricably linked, a bond unlikely to break until the last man standing.

An important point to remember — and one missed by the overhyped coverage of the loyalist Homs protest by mainstream media — is that although regime supporters in Homs are seething with fury and resentment, they are hardly likely to switch allegiance to the side that murdered their children. Furthermore, the rising radicalization and sectarianism of rebel factions since the Syrian conflict's outbreak, and the political opposition's inability to convince or reach out to the regime’s support base, especially minorities, cemented the bond between the Syrian regime and its supporters. To put it simply, they have no other alternative.

Any perception of cracks in the regime’s base is wishful thinking. The regime knows this, which explains its indifference to its own people’s demands. It knows it can get away with just about anything it does to or demands of them and that is unlikely to change anytime soon. On the contrary, the emergence of ultraviolent terrorist groups like the Islamic State and other al-Qaeda affiliates hell-bent on genocide has drawn the regime and its supporters even closer together, as their fates now have intertwined.

As my longtime Alawite friend in Aleppo, Abu Layth, said: “I was never a regime supporter and neither I nor my family has ever benefited from being Alawites. Quite the opposite, as our clan wasn’t like those rich and connected ones. But tell me what choice do I have now? If it falls, we all fall together. They [the rebels] won’t spare any one of us.”

Fear, perceived or real, is a key factor in the Syrian war. It’s crucial, and each side does its utmost with propaganda to ensure a healthy dose of fear continually gets pumped into their respective perpetually shell-shocked populaces. Mutual distrust, fear, demonization and incitement is the name of the game.

It'll be a tall order to deconstruct should a peace process eventually get underway in this shattered nation.