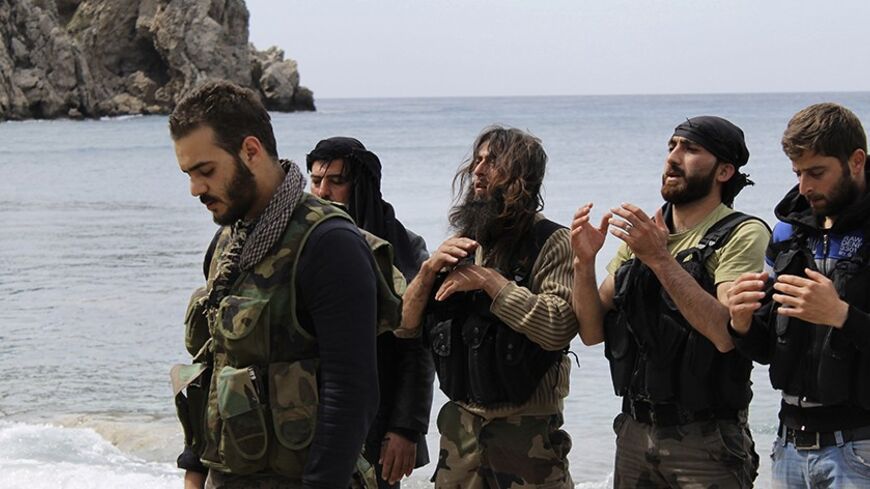 Rebel fighters pray at the beach of al-Samra in Latakia province, near the town of Kassab, March 31, 2014. - REUTERS
Edward Dark
@@edwardedark
April 8, 2014

ALEPPO, Syria — Predictably, as soon as the battle for the strategic Qalamoun area in the mountainous regions between Syria and Lebanon drew to a close — with the regime gaining the upper hand — fresh fronts opened in this seemingly endless civil war. Their location, however, was quite unexpected. Most Syria observers and analysts expected to see the next big battle in southern Daraa province, the birthplace of the Syrian uprising and a stronghold of mainstream rebels backed by the West and regional powers. Crucially, this area is devoid of the radical Islamist groups that have dominated other parts of the war-torn country.

The shock came when a new front opened in Kassab in rural Latakia province, a stronghold of the Syrian regime largely composed of Alawites. Kassab itself was a predominantly Armenian resort town, and fear spread that the extremist Islamist factions that stormed the town might perpetrate genocide against the inhabitants. This fear was not entirely unfounded, as such violence would have been a repeat of the war crimes perpetrated the last time rebels launched an offensive into rural Latakia in August 2013, according to Human Rights Watch.

Importantly, the Syrian regime accuses Turkey of providing the logistical and military support the rebels need to take over the area. This fresh offensive raises already strained sectarian tensions in the country to a dangerous breaking point, as the city of Latakia has become home to hundreds of thousands of displaced Sunnis, especially from Aleppo, joining its native inhabitants of mixed Sunnis, Alawites and Christians. The danger is being taken seriously by both the regime, which has sent reinforcements of its best units to the area, and members of the opposition, with Michel Kilo condemning the Kassab offensive and ringing alarm bells.

Syrian National Coalition head Ahmad Jarba visited the front lines to maintain the appearance of relevance and to reiterate that the goal of the rebels was not ethnic cleansing, but rather fighting the regime. Such words would undoubtedly sound hollow to local residents, who heard much the same when Gen. Salim Idriss of the Free Syrian Army visited the Latakia front lines last August with the same message. Soon after, heinous massacres were committed against the Alawite community.

Latakia is a tinderbox, and the perils there are real and should not be understated. All-out sectarian warfare, ethnic cleansing and disintegration of the Syrian nation into sectarian enclaves are all real possibilities now. Such scenarios might actually be the purpose of some of the radical Islamist groups spearheading the current assault. They realize they cannot win the war and control the country outright, so the next best thing is to carve for themselves a Sunni state from the carcass of a dying country.

Inciting genocide would be the best way of achieving that result. Whether the regional and global powers backing these militants, or indeed the Syrian opposition, are aware of such plans is unclear. But if not, one has to wonder about the strategic rationale justifying such a large-scale military offensive into a sensitive area. Another equally important question is whether the recent direct Turkish involvement in the Syrian conflict was simply a ploy by the Turkish prime minister ahead of local elections, or heralded the beginning of a new phase in which Turkey became actively embroiled in its neighbor’s war.

Another front that has heated up, although perhaps for different reasons, is Aleppo. After a succession of rapid military gains by regime and loyalist forces in and around the city, their campaign seemed to be stalled as resurgent Islamist rebel forces began their own offensive in late March.

After the Islamic State of Iraq and al-Sham (ISIS) withdrew from most of Aleppo province, consolidated its hold in al-Raqqa and concentrated its military effort into fighting the Kurds in Hasakah, the rebel groups in Aleppo were given a reprieve and a chance to regroup. This lifting of ISIS pressure culminated in an unprecedented assault on the northwestern entrance to the regime-held part of Aleppo, dominated by the infamous and powerful air force intelligence headquarters in the al-Zahra neighborhood. The fighting has been fierce and intense, with the sounds of explosions, rockets and missiles piercing the quiet spring nights, while the mostly Islamist rebels took over strategic buildings in the nearby Layramoun area. In the last couple of days, the rebels have also attacked in the northeast — at the Damascus highway — with their sights fixed on the large military academy that dominates that area. The attacks on the two fronts appear to be coordinated to pressure the regime in its most important bases and cut off the only lifeline to the west of the city via the Khanaser military road.

Needless to say, the flare-up in violence has taken a terrible toll on the city's civilian population, with both sides lobbing shells, missiles and rockets in blatant disregard for civilian lives and casualties. Meanwhile, activists have launched an online campaign called “#SaveAleppo,” which has drawn considerable attention, mimicking the earlier “#SaveKassab” campaign by the Armenian diaspora. The Aleppo campaign aims to draw attention to the terrible carnage and destruction caused by the regime’s use of barrel bombs, which a March 24 Human Rights Watch report describes in horrific detail. Although paling in comparison, the rebel strikes on regime-held west Aleppo have also resulted in a high number of casualties. The past 10 days have been particularly intense, with an average of 20 shells and missiles falling across most neighborhoods daily, killing and wounding dozens. On March 7 alone, rebel shelling on the Hamdanieh area killed 11 and wounded over 30, while on March 6, a shell fell on a relief agency center brimming with people, but failed to explode.

Once again, Aleppo seems stuck in this bewildering and horrendous paradox where each side targets civilians across the divide in tit-for-tat retaliation. The ones dying by the hundreds are all innocent. We, the residents of this godforsaken city, are paying the ultimate price for this futile madness.

All in all, it appears that the Syrian conflict is destined to remain in a bloody deadlock, just as that very stalemate spirals the country dangerously down the path of open sectarian violence. Right now, Syria is at one of the most volatile and dangerous stages in its bloody conflict, and a shift into genocidal free fall is a real possibility.