Syrian regime forces and rebels holed up in Aleppo worry that ISIS' newfound power and advanced military hardware in Iraq will result in a renewed offensive on Aleppo. 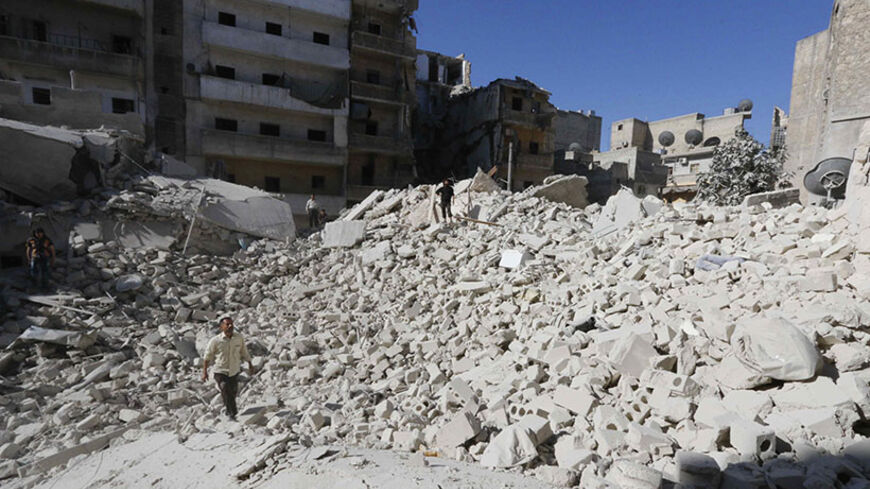 A man walks across debris of collapsed buildings at a site hit by what activists said was a barrel bomb dropped by forces loyal to Syria's President Bashar al-Assad in Aleppo, June 18, 2014. - REUTERS/Hosam Katan
Edward Dark
@@edwardedark
June 19, 2014

ALEPPO, Syria — The spectacular and shocking offensive in Iraq by the Islamic State of Iraq and al-Sham (ISIS) that has seen the extremist terror group take large areas in the west of the country, including its second largest city, Mosul, has the entire region and the world rightly worried. ISIS is said to boast an army of 10,000 fierce fighters, more than $2 billion in assets and huge caches of weapons and equipment seized from the Iraqi army, making it a serious threat to global security. The ISIS resurgence in Iraq feeds off the group's escapades in Syria, where it developed from welcomed liberator to despised villain. Will history repeat itself in Iraq?

Abu Jimaa is a middle-aged man with a large family who hails from the town of Bayanoun, a town in Aleppo’s north countryside well-known for its religious conservatism and as the birthplace of many of the leaders of the Muslim Brotherhood in Syria from the al-Bayanouni family. When the Syrian conflict escalated and became armed, Abu Jimaa took up weapons along with many of his townsfolk and joined a local rebel militia. In January, he was involved in routing ISIS from Bayanoun, after their successful advance into the northern countryside, starting with the border town of Azaz, near the Turkish border.

Back then, Abu Jimaa told me how they felt betrayed by the group they had once worked with and welcomed, believing they were liberators who shared their vision and ambition to topple Syrian President Bashar al-Assad’s regime. “We didn’t mind that there were many foreigners among them. In fact, we thought it was a great sacrifice and an honor that they would leave their own countries and risk their lives fighting for us. We thought they were our friends and brothers,” Abu Jimaa said at the time.

That special friendship peaked in summer 2013 after ISIS, led by Abu Omar al-Shishani, took the Minnigh military airport, north of Aleppo, after a 10-month siege, prompting the then-head of Aleppo’s Free Syrian Army military council, Col. Abdul Jabbar al-Oqaidi, to sing its praises. That did not last for long, however. After the initial euphoria, it became apparent that ISIS had other plans. Far from sharing the rebels’ goal of ridding Syria of the Assad clan, ISIS' priority was establishing an extremist Islamist caliphate on territory the regime no longer controlled.

Although Abu Jimaa and the overwhelming majority of the rebel factions in Aleppo were Islamists and wanted a Sharia-ruled state, they were not as extreme or fanatical as ISIS members. That inevitably meant clashes with local rebels and other Islamist factions, which ISIS did, successfully taking over large swaths of territory in eastern Syria in al-Raqqa as well as Aleppo, in rural areas and parts of the city, in late 2013. A concerted and unified effort by Islamist rebels who joined forces to create the Islamic Front successfully drove ISIS from rural Aleppo, except for the towns of al-Bab and Manbij to the east.

I've known Abu Jimaa for many years and have maintained contact throughout the Syrian conflict. When I asked him about his thoughts on the dramatic gains by ISIS in Iraq and what impact he thought they might have on the conflict in Syria, he said, “They have become very powerful now, and have all the weapons they took from Iraq and all that money, while we have nothing to fight with. The funny thing is that no one wants to send us weapons in case they fall into their hands, but look now.”

He added that he thought ISIS would be able to take Deir Ez-Zor, to the east, and then come for Aleppo. “This is our fear now, that they will come back after we kicked them out with many losses. But this time we might not be able to defeat them, and many may even join them instead. They will push from al-Bab to the east this time, not from the north.”

On the other side of the equation, 1st Lt. Maged, an officer with the regime stationed in west Aleppo, is a career soldier. He hails from Tartus, on the coast, and is a member of the minority Alawite sect, to which Assad also belongs. Officers like him are the linchpin of the Syrian army, which has been reduced in number — at least the reliably effective corps — but remains fiercely loyal to the regime. Bolstered by local as well as foreign militias, they have been making slow but crucial gains on the battlefield, most recently retaking the scenic Armenian town of Kassab, in Latakia province near the Turkish border. Maged was sent to Aleppo 18 months ago as part of reinforcements to bolster regime forces and prevent what was left of the city still under regime control from falling to the rebels. He told me he has not seen his family since, having never been allowed leave.

The lieutenant also predicted ISIS would return to the north, hit rival rebel factions and confront the regime in Aleppo. “They are now more powerful than the other terrorist groups and will soon destroy them in the north. After that, we will destroy them, and we will have many allies to help us, even the ones who were before against us.”

I asked Maged if he had ever fought directly against ISIS, to which he replied, “No. They avoid direct frontline confrontation, but this will change soon if they come to Aleppo. We will fight them here.” When asked if he was worried that ISIS now had heavy and sophisticated weaponry, he responded, “Of course it worries me. It means more casualties among our men. But it may also persuade our allies to send us more help. It’s a double-edged sword.”

It seems Iraq’s Sunnis supporting ISIS today are destined to share the same fate as Syria’s rebel-supporting Sunnis, as they struggle against a regime they view as sectarian and oppressive. Their willingness to join forces with the devil to defeat their opponents will soon turn the ecstasy of newfound liberation into the slow horrible realization that they’ve been used and preyed upon by an opportunistic terrorist group hell-bent on resurrecting a medieval theocratic fiefdom ruled by brute force and inhumane repression, complete with beheadings, stonings and crucifixions. What is certain is that as ISIS’s fortunes rise in Iraq, they rise as well in Syria. As far as ISIS is concerned, they are fighting in one large, borderless, Islamic state.