Despite diplomatic stalemate, Livni clings to her seat

Despite being a strong public advocate for peace, Tzipi Livni remains a member of an Israeli government hostile to the diplomatic process with the Palestinians. 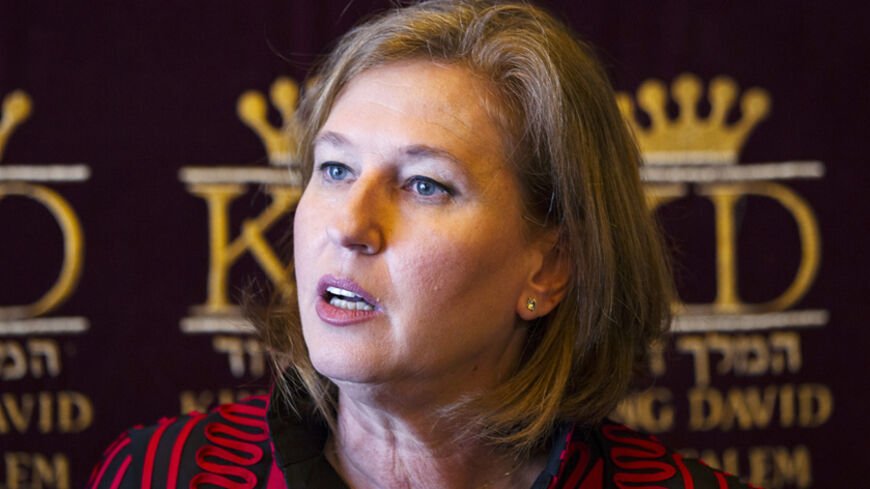 On the morning of Oct. 2, one day after a meeting in Washington between Prime Minister Benjamin Netanyahu and President Barack Obama, the Americans were once again reacting to being taken by surprise by building plans for East Jerusalem. Reports of the plans emerged right before the two men were supposed to meet, at a very sensitive time. A White House spokesman used particularly harsh words to express the administration’s condemnation of the construction, stating that it was “poisoning the atmosphere.”

The US condemnation ended a very tough week for whatever was left of any hopes that the diplomatic process with the Palestinians would be revived. Palestinian President Mahmoud Abbas’s speech at the UN General Assembly, followed by Netanyahu’s speech before the same august body, dealt the final death knell to “peace talks.” The Palestinians announced that they would seek full recognition from the United Nations.

In theory, Benjamin Netanyahu should be worried about the political implications of the situation because the Hatnua Party, led by Justice Minister Tzipi Livni, has no real place in a right-wing government that has buried the peace process once and for all. In reality, however, Netanyahu has no reason to worry at al. Whatever his political problems, they won't be caused by the two people “bearing the banner of peace” in his government. Those two ministers from Hatnua, Livni and Minister for Environmental Protection Amir Peretz, continue to give the impression that they have no intention of abandoning their seats any time soon, as they have since negotiations broke down in April.

Livni and Peretz have spoken mighty highly of their historical role of advocating for the diplomatic process in the Netanyahu-Naftali Bennett government. They would remain ever vigilant, they said, and lead Netanyahu along the right path. After eighteen months of this partnership, however, they look more like collaborators working with one of the worst governments Israel has ever had in terms of relations with the United States and the diplomatic process with the Palestinians.

Rather than reflecting on whether she should remain in the government, Livni gave an interview to Israeli public radio Oct. 2 in which she accused HaBayit HaYehudi of putting the Zionist enterprise at risk. Meanwhile, for the past few weeks, Hatnua Knesset member Amram Mitzna has been trying in vain to convince his fellow party members that the time has come to leave the coalition. He speaks to Livni about it on a regular basis, but much to his consternation, his position is still in the minority. No one in the party apart from himself has any intention of leaving the coalition, even if doing so would demonstrate a commitment to the very agenda that led to the formation of Hatnua and on which it won six Knessets seats in January 2013.

“From an ethical and moral perspective, I don’t think we can continue sitting in this government,” Mitzna told Al-Monitor. “I feel very uncomfortable being part of a coalition where under its leadership [settlers] take over houses in Silwan. It is no secret that I told Tzipi Livni long ago, in no uncertain terms, that she should leave the government. This is a failed government with no vision and no goals. The only reason it is able to survive is because there is no alternative to it. I think that even if we don’t bring down this government, we should challenge its very foundations and show real values. This is a bad government, which is marching us forward to a very grim future, to disaster.”

On Oct. 2, Livni posted a brief message to her Facebook page summarizing her most recent visit to the United States, writing, “I spent the past two days in Washington dealing with two worlds: justice and diplomacy. I met with various people, including Secretary of State John Kerry and National Security Adviser Susan Rice, and I represented Israel at an international conference to find ways to deal with the sexual harassment of minors on the social networks.”

Livni failed to mention a word about the collapse of the diplomatic process for which she is responsible within the government. She also didn't mention the various plans to build in settlements across the Green Line that have had a damaging effect on Israel’s relationship with the Obama administration. It looks, instead, like Livni has made a strategic decision to cling to her seat no matter what. Otherwise, it is hard to explain why she continues sitting in a right-wing government with extremist elements and headed by someone who has no intention of holding binding negotiations with the Palestinians, an issue so central to her platform.

Livni is waging her own public relations campaign to counter such criticism, emphasizing her various activities. So, for example, the staff of the justice minister made a point of telling journalists that just hours after Netanyahu’s aggressive speech to the United Nations, she met with Secretary Kerry in his office to develop creative new ideas for negotiations given the new opportunities in the region. Another leak involved a private dinner in New York to which Livni was invited as the minister responsible for negotiations with the Palestinians. The gathering was attended by various Arab leaders, including from states that do not have relations with Israel.

These stories were not made public without a reason. With no real diplomatic content or process to show for her efforts, Livni is manufacturing an atmosphere of activity and creating a sense that she is working hard to achieve the peace we all long to see. In political circles, she can be said to be “blindly following the herd,” all the while knowing it is headed in the wrong direction.

It would be wrong, however, to place all the blame on Livni. She is sharing this path with her senior partner and fellow minister in the Netanyahu government who left the Labor Party in December 2012, claiming that its then chairman, Shelly Yachimovich, had forsaken the diplomatic vision that is such an integral part of his being.

Peretz is a combative politician, who knows how to manage a political crisis to achieve an objective, which makes it all the more surprising to see him remain part of a government that has long since made it perfectly clear that it has no intention of moving forward on an agreement with the Palestinians. If Peretz really believes that Netanyahu, Foreign Minister Avigdor Liberman and Economy and Trade Minister Bennett are right in that Mahmoud Abbas is not a partner for peace, let him get up and say so with his own voice. Let him tell his voters that he has given up and is waving a white flag of surrender in all matters pertaining to the peace process. If, however, he still believes in negotiations with the Palestinians, he should immediately resign from the government.

Hatnua belongs in the opposition, along with the Labor Party and Meretz. The problem is that experienced politicians like Livni and Peretz will always find a way to explain why they are still clinging to their seats. They can always claim that they are engaged in covert explorations with various Arab states about ways to move the diplomatic process forward.

Former Labor Party minister Ophir Pines-Paz recently offered an apt description of how weak the political center-left really is. In a penetrating Facebook post, he wondered about the self-imposed silence from these parties after the settlers' purchase of houses in Silwan. He concluded, “There was once a peace camp in Israel, but it no longer exists.”