Zionist Camp co-chair Isaac Herzog has refused to reject joining a unity government with the Likud, although the leftist parties in such governments typically end up serving as "defense attorney" for right-wing policies. 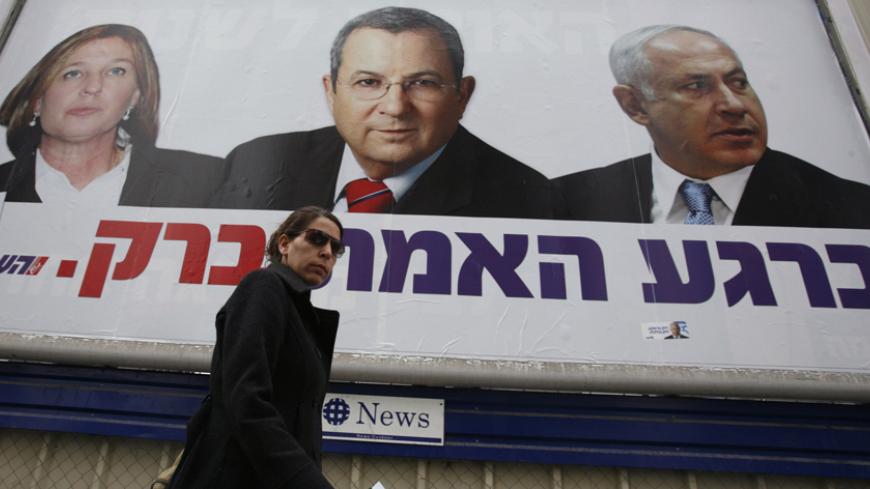 Despite the sharp criticism he directed at the decision by Prime Minister Benjamin Netanyahu to address the US Congress on March 3, Isaac Herzog, chairman of the Zionist Camp, has rebuffed all attempts to extract a commitment from him not to join a Likud-led government. Herzog keeps reiterating that he will be the one forming the next government, but in talks with Al-Monitor over the weekend, members of the Zionist Camp's campaign headquarters, speaking on condition of anonymity, conceded that there is virtually no chance that a majority 61 members of the 20th Knesset will recommend to the president that Herzog form the next government.

Let's say, however, that at the last minute, Herzog declares from every rooftop that he prefers the opposition benches to the leather-upholstered arm chairs around the Cabinet table. What will that mean in terms of the day after the March 17 election? If the past is any indicator, very little.

Prior to the 2001 election, Prime Minister Ehud Barak said, "We will not serve in an Aswan-Tehran government [a reference to the reported intention to bomb the Aswan Dam and Iran's nuclear facilities]. The radicalism of Mr. [Ariel] Sharon-[Avigdor] Liberman, as reflected in their statements, makes this government dangerous." After the election, Labor joined the Sharon government.

Prior to the 2003 election, Labor Chairman Amram Mitzna said, "Ariel Sharon is leading us toward a disaster." Less than two years later, in 2005, well after Mitzna lost the leadership to Shimon Peres and left the party, Peres led Labor directly into the Sharon government. His successor as chairman, Amir Peretz, pledged before the 2006 election, "I will not be in a coalition with Liberman," but he then joined the Ehud Olmert-Liberman government.

Former Labor Secretary-General Ophir Pines-Paz learned the hard way the meaning of commitments not to join right-wing governments. In 2007, Pines-Paz ran for the leadership of the Labor Party, but failed in the first round. In the second round, he backed Barak after he publicly pledged not to join the right-wing government as second fiddle. In the December 2008 party primaries, Pines-Paz came in second on the nationwide list of candidates and was third on Labor's list of candidates for the 18th Knesset. A year later, with Barak serving as defense minister in the Netanyahu government, Pines-Paz withdrew from politics, saying, "The Labor Party has lost its way, and I can no longer exert any influence."

In a conversation with Al-Monitor, Pines-Paz did not hide his concern that Herzog and the coalition's co-chair, Tzipi Livni, will lead the Zionist Camp into Netanyahu's arms. "From day one, they have been careful not to burn their bridges to Netanyahu, and they haven't been displaying self-confidence in their ability to win," Pines-Paz said. He quickly added, "In my view, there is no more severe betrayal of voters than joining the other side. … One cannot go on and on about how corrupt Bibi is and then sit next to him in government. It's behavior like that that keeps the public away from politics in general and Labor in particular."

Pines-Paz, currently a lecturer on public policy at Tel Aviv University, is convinced that the Labor Party is at a point where it is considered an alternative to the ruling party only because in the last Knesset it opted for the opposition benches. "Had it joined the government," he said, "Labor would have plunged to almost the same low as that to which Livni's Hatnua Party dropped." He warned that if the party goes crawling into the next government, it could be destroyed.

The authors of a 1997 review of national unity governments in Israel and the world, published by the Israel Democracy Institute, wrote that unity governments actually neutralize parliamentary accountability because the legislative branch is viewed by the executive as a "rubber stamp." The researchers noted that the very existence of a "large coalition" is usually incompatible with the inherent elements of a democracy, such as competitiveness, freedom of choice among ideological and political alternatives, the system of checks and balances between the executive and legislative branches and the independence of party identities.

Yoram Dori, who served as a strategist for Peres, a man who spent the better part of his years in unity governments, calls these governments "an insult to voters." Dori told Al-Monitor, "In Israel, opposition to a right-wing government is a significant pressure group that pushes the government toward the left. In a unity government, the left becomes the defense attorney for right-wing policy instead of an alternative."

Indeed, other than the 2000 withdrawal from Lebanon and the Taba agreement during the rotating government of Peres and Yitzhak Shamir (1984-88), national unity governments have been unable to achieve significant diplomatic accomplishments. The peace agreement with Egypt was credited to the first Likud government, headed by Menachem Begin, with the support of the opposition Labor lawmakers. The Shamir government launched the peace process with the Palestinians, the Syrians and the Lebanese at the 1991 Madrid conference, paving the way for the government of Yitzhak Rabin to sign the 1993 Oslo Accord. Breaking the taboo on Israeli relations with the Palestine Liberation Organization probably could not have happened under a broad-based government.

On the other hand, a rotating government had undermined the London agreement that Peres crafted in 1987 with Jordan's King Hussein, as well as the US initiative to start negotiations with a Palestinian delegation from the territories. Nonetheless, Labor ministers were in the government during the 2006 Lebanon War and also supported the 2002 Operation Defensive Shield and the unilateral withdrawal from Gaza in 2005, the latter two strengthening Hamas at the expense of the Palestinian Authority.

It is worth recalling that on three occasions — 1984 and 1988, with the formation of unity governments, and in 1986, when they rotated — the president of Israel served as the chief matchmaker and mediator between Likud and Labor. He helped Peres and Shamir overcome their mutual detestation and deep ideological divide and jettison the belligerent declarations of the election campaign. The name of that late president was Chaim Herzog, Isaac's father.