The Turkish decision to build an Islamic university similar to Al-Azhar has escalated the already tense relations between Cairo and Ankara. 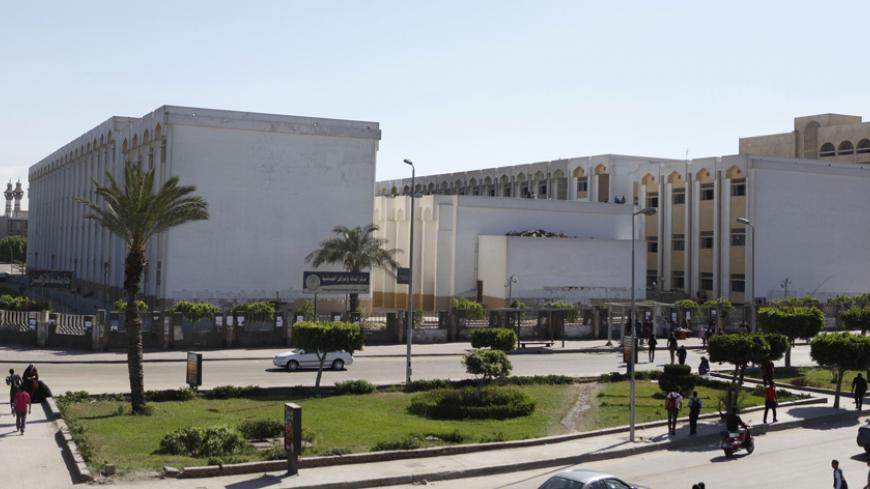 A general view shows Al-Azhar University, which was founded in the 10th century, in Cairo, March 19, 2013. - REUTERS/Amr Abdallah Dalsh

CAIRO — The Turkish-Egyptian political conflict escalated Sept. 24 after Turkish President Recep Tayyip Erdogan’s speech to the UN General Assembly. Erdogan criticized the current Egyptian regime, describing its rise as a coup d’état. Egyptians frowned upon the statement, viewing it as interference in Egyptian internal affairs. The Egyptian diplomatic corps, highly angered by the speech, responded through official statements, which for the first time deviated from the usual diplomatic wording and accused Erdogan of funding terrorist groups.

Turkish-Egyptian tensions took on a new dimension, reaching the religious establishment of Al-Azhar, based in Cairo, after the Turkish Ministry of Religious Affairs announced its intention to build an Islamic university similar to Al-Azhar. According to Turkish officials, the university will replace Al-Azhar, whose role in the Islamic world has diminished. The move has awakened the ire of religious circles in Egypt.

President of Al-Azhar University, Abdel Hay Azab, described the Turkish announcement as a mere “joke” in a phone interview with Al-Monitor. He said, “Al-Azhar enjoys great historical value. Its influential role remained in the Arab and Islamic world for more than a thousand years. Even if Turkey was to build a hundred educational facilities and equip them with the most lavish furniture and state-of-the-art technologies, it would not be able to pull the rug from under Al-Azhar, because great historical value is not about location but position.”

“There are more than a hundred universities for religious studies in the world. Were any of them able to compete with Al-Azhar or threaten its position and role?” he asked.

“I wish that all the countries around the world would proceed with establishing Islamic universities as moderate as Al-Azhar, because it would never affect Al-Azhar in any way,” he said. “Al-Azhar holds historical value in the heart of Muslims in the four corners of the world. Even to the Turks and to sects other than Shiism, Sunnism and Ibadism, Al-Azhar is of considerable value. It is also valued in the Americas. This is why it has reached this international position. Can Turkey buy this historical and international position with money? I do not believe so.”

Mohammad Shahat al-Jundi, a member of the academy, told al-Monitor, "The Turkish attempt to create a competition against Al-Azhar does not aim at spreading the Islamic faith in the world but rather underlines political goals. [Turkey] aims to attract Muslims to study in Turkey to outshine Al-Azhar. It wishes to restore its glorious past as a caliphate state."

Regarding the accusations leveled by the Turkish Religious Affairs Ministry that the role of Al-Azhar has diminished, Jundi said: “No one denies it. Indeed, the role of Al-Azhar has plummeted since the revolution of 1952. The successive regimes in Egypt, starting with [Gamal] Abdel Nasser, [Anwar] Sadat and ending with [Hosni] Mubarak, sought to dwarf its role. These rulers worked solely on reinforcing their positions because they did not want any competition. As a result, the Muslim Brotherhood and Salafists were granted significant opportunities. However, Al-Azhar is recovering and has been slowly restoring its role since the January 25 Revolution. This has raised concerns in Turkey, which wishes to prove itself as the only political pole in the region with military and economic superiority.”

He added, “Some educational institution, such as az-Zaytouna Mosque in Tunisia and al-Qarawiyyin Mosque in Morocco, attempted to compete with Al-Azhar. Where are they now? This is why the attempts of Turkey will not succeed.”

Egyptian-Turkish relations are going from bad to worse, noted Said al-Lawandi, an expert in international relations at al-Ahram Center for Political and Strategic Studies. In a phone interview with Al-Monitor, he said, “The dispute is intensifying. It started with what Egypt thought was interference in its affairs when Turkey opposed the June 30 revolution and described it as a coup d’etat. Subsequently, Egypt threw the Turkish ambassador to Egypt out and called its ambassador to Turkey back.”

He added, “The hatred Erdogan harbors toward President [Abdel Fattah al-]Sisi is clear and was shown in his speech at the UN General Assembly. His statements worsened the relations, especially after the Egyptian Foreign Ministry responded with a statement, affirming that Turkey has crossed all the red lines. This bodes even worse relations between both countries in the future.”

According to Lawandi, the Turkish intention to establish a competing university is another leaf in the book of disputes. “Erdogan’s fear of Al-Azhar restoring its role in tandem with how Egypt revived its leading position with Sisi assuming presidency, is why Turkey is taking such a step. He has to know that politicizing religion is dangerous.”