Egypt plans to cultivate 4 million acres of strategic crops for its large population, but water scarcity and a lack of funds raise doubts about its feasibility. 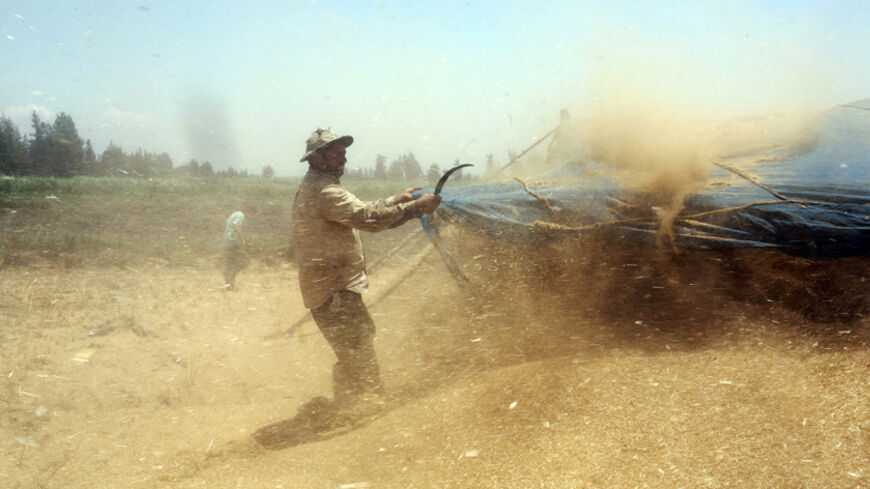 An employee works next to hay coming out of a threshing machine during a harvest of wheat crop in the Nile Delta province of Al-Baheira, northwest of Cairo, May 22, 2014. - REUTERS/Asmaa Waguih

CAIRO — Despite Egypt’s limited water resources, the Egyptian government is confident and decisive about cultivating 4 million undeveloped acres for agricultural use outside the Nile Valley and the Delta line. This new plan for farmland is not without difficulties, chief among which is the water shortage and the lack of adequate money for the reclamation of desert lands.

The project started with President Abdel Fattah al-Sisi's electoral program and consists of cultivating the land to achieve food security. It also aims to strengthen competitiveness within domestic and international markets and developing the agricultural production of each unit of land and water. The project was adopted by the government formed by Sisi following his victory, and the Ministry of Agriculture announced a set of measures to start land distribution and to develop implementation timelines.

On Sept. 19, Minister of Agriculture and Land Reclamation Adel El-Beltagy, the former supervisor of Sisi’s agricultural dossier, announced the start of the first phase of the project to plant the first million acres in 11 districts, mostly in the western desert and Toshka, in a huge celebration to mark the occasion of an Egyptian farming holiday.

The Egyptian government has adopted this plan at a time when the agricultural area in the ancient lands of the Nile valley and Delta are being eroded due to the continuous urbanization of agricultural land. However, in light of the serious actions taken by the Ministry of Agriculture to implement the project, there are still many questions about the possibility of providing water for the reclamation of new land, at a time when Egypt suffers from a severe shortage of water resources.

“Groundwater will be the main source used in the cultivation of most of the spaces in the first 1 million acres,” Fathi Geweili, the head of the Irrigation Department at the Ministry of Egyptian Water Resources, told Al-Monitor. “We will provide underground water to irrigate 90% of the area, while the remaining 10% will be irrigated from surface water and the Nile.”

The Ministry of Water Resources began water processing measures in a number of areas to be cultivated. “We started locating and preparing the areas where wells are to be drilled south of the Siwa Oasis, south and east of the Qattara Depression, west of Minya, the vicinity of Toshka and Owaynat and southwest Egypt,” Geweili said. “The land was selected based on thorough studies carried out via satellite imagery to validate the amount of groundwater available in the area, but there are no studies confirming the sustainability of groundwater that could guarantee the continuation of these crops.

“Measures will be taken to adjust the rates of water withdrawal from groundwater wells to ensure sustainability,” Geweili said. “The experience of flood irrigation and water waste cannot be repeated and it ought to be completely erased from Egypt’s policies.”

Khaled Abu Zeid, head of the aquatic programs in the Arab Water Council, said in an interview with Al-Monitor, “The state’s reliance on aquifers is a temporary solution to face water scarcity, but most of the groundwater in Egypt is nonrenewable.”

Abu Zeid said, “The areas to be irrigated by groundwater within this project cannot be sustainable plantations. There must be other nontraditional water resources, such as reusing wastewater and resorting to projects that could increase [Egypt’s] Nile share from the headwater states.”

A large part of the land guaranteed by the government in the first phase of the project, in Western Sahara, relies on groundwater in the Nubian Sandstone Aquifer, which extends from Egypt to Chad, passing through Libya and Sudan. This could trigger a crisis in Egypt's depletion of the aquifer resources to cultivate tracts of land within Egypt.

But Abu Zeid said, “Water in the Nubian Sandstone Aquifer is nonrenewable as well, and there is a joint body among the four countries tasked with coordinating the use by each state.” He stressed that, “The withdrawal of water from the reservoir in the Egyptian land far from the border with Libya or Sudan, will technically not affect the amount of water in the aquifer outside of Egypt.”

Abu Zeid believes “It is necessary that the plan for the planting of the first one million acres be consistent with the agricultural development strategy for Egypt until 2030, especially to achieve a food security ratio by settling for a specific amount of strategic crops to cover domestic consumption.”

The state has not yet tackled the possibility of setting conditions in contracts with investors. Such conditions would include opting for the cultivation of crops that do not require much water.

Water experts in Egypt agree on is the need to search for new solutions and carry out studies to provide nontraditional water resources without resorting to the Nile water or groundwater.

“The success of the project will depend on the state's ability to find nontraditional water resources,” groundwater expert Maghawri Shehata said in an interview with Al-Monitor. “The reclamation of 4 million acres of land requires at least 20 billion cubic meters of water, which is an impossible dream in light of the water poverty currently plaguing Egypt.”

Besides the crisis of water scarcity, there is the problem of the economic aspect and the need to provide the necessary money for drilling wells, the reclamation and preparation of land for cultivation and the connection of facilities and infrastructure, including electricity and roads in the spaces announced in the project.

The government is examining the land distribution mechanisms and ownership patterns. It plans on giving the larger part to Gulf and other foreign companies capable of providing financial resources and bearing part of the infrastructure cost to prepare the land for agriculture. It has put forward ideas whereby it would distribute small areas of land — from three to five acres — to state project called Young Graduates and leave the large spaces — ranging between 20,000 and 25,000 acres — to Arab and foreign investment companies, according to a statement by the government on Sept. 17.

Amid the water and food crises plaguing Egypt, as well as the lack of acreage, hopes hang on the seriousness of the state in adopting an effective plan and strategy to achieve self-sufficiency as far as strategic crops - such as wheat, corn and barley - are concerned. This is without depending on imports while it is implementing the unconventional policies to overcome the water crisis and adapt to this resource scarcity.