Egypt has put forward proposals to cultivate 4 million acres of land for growing crops, but questions are being raised about where the water will come from. 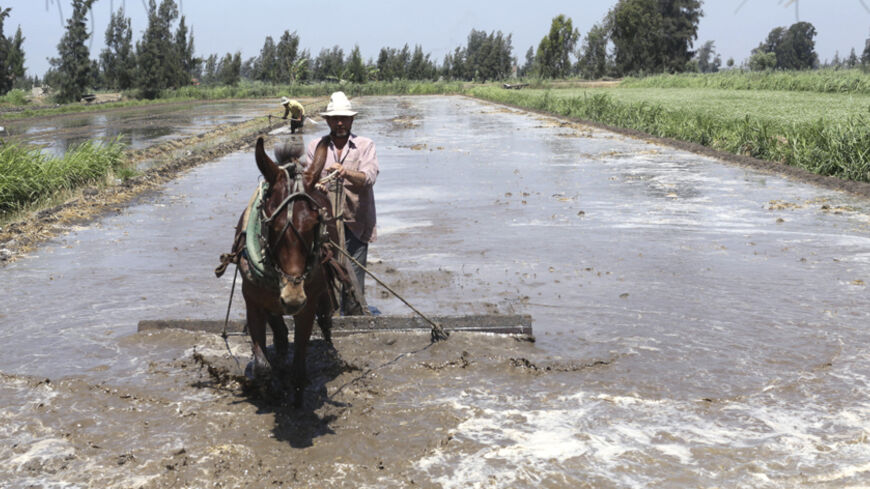 A farmer flattens the soil using a horse to prepare his land for growing rice in the Nile Delta province of Al-Baheira, northwest of Cairo, May 22, 2014. - REUTERS/Asmaa Waguih

CAIRO — Egyptian President Abdel Fattah al-Sisi’s four-year mandate includes a plan to reclaim and cultivate an additional 4 million acres of agricultural space in Egypt, despite the country's struggle with a dwindling water supply and an increasing population that is forced to share the stagnant water from the Nile River, estimated at 55 billion cubic meters yearly.

Egypt is experiencing a crisis with the Nile’s headwater states, following the signing of the Nile Basin Initiative in 2010. Egypt and Sudan, the two countries at the mouth of the Nile, are threatened by the initiative in that they are to lose their part of the water share set by previous agreements — something the headwater states refused to recognize in the initiative's new articles in their desire to redistribute the sharing of the Nile water.

As Egypt’s water share is not able to fully cater to its agricultural, industrial and potable needs, Sisi has demanded engineers working for Ibrahim Mehleb’s government to search for alternative water sources to meet the demands of his proposed ambitious cultivation project by resorting to groundwater or processing agricultural wastewater and reusing it, besides the desalination of seawater.

The Ministry of Water Resources and Irrigation declared that it was possible to provide the needs of the first phase of the cultivation project, which will be implemented during the first year of Sisi’s mandate and cover an area of 1 million acres out of the total 4 million. This will be accomplished by drilling wells to extract groundwater from several spots in the Western Sahara, east Owaynat, Toshka, Hala’ib and Shalateen.

The implementation of the plan is taking place despite some studies showing that the sources of groundwater in North Africa, including Egypt, are nonrenewable, especially in the Western Sahara, the oases and Matrouh, since these waters come from the Nubian Sandstone Aquifer System.

This created a wave of objections from water experts in Egypt opposing the implementation of the project.

The former minister of water resources and irrigation and a teacher in irrigation and hydraulics at Cairo University, Mohammad Nasreddine, told Al-Monitor: “There is no groundwater reservoir in Egypt capable of catering to the needs of this project. On the contrary, relying on groundwater to conduct the project will drain the Egyptian groundwater supply and will harm the quality of water in the groundwater aquifers because it is nonrenewable.”

“Cultivating millions of acres by relying on groundwater in Egypt is unrealistic, and most water specialists in Egypt agree on this, said former manager of the Center for Water Projects at Cairo University's faculty of engineering Rida al-Damak in an interview with Al-Monitor.

“We do not know why the government is insisting on repeating these types of projects without real feasibility studies. The pre-revolution governments made the same mistake in projects such as Tshoka, where billions of Egyptian pounds were squandered setting it up. However, it hasn’t borne any fruits,” Damak said.

He added that all hydrology studies regarding the groundwater aquifers in Egypt show a plunge in piezometric levels, especially in the Nubian Sandstone Aquifer System in the Western Sahara, where most of the area of the first 1 million acres that will be cultivated is located.

“How can officials in Egypt’s government talk about cultivating millions of additional acres in a country suffering from a dangerous lack of surface water and groundwater resources, and where most vegetables have been cultivated using agricultural wastewater and sometimes sewage for over 25 years?” he said.

Meanwhile, Minister of Water Resources and Irrigation Hossam Maghazi defended the project and told Al-Monitor in a phone interview, “We have conducted the necessary studies to overcome the challenges of water scarcity in Egypt and to widen the agricultural space with 4 million additional acres.”

He said that this project will rely on 20% of regular surface water, while the other 80% will come from groundwater.

“We are well aware of the problems with the scarcity of water and the crisis of groundwater aquifers in Egypt. But, we have overcome these issues by separating the areas to be cultivated. We won’t plant the first 1 million acres in one area. Instead, we will divide them over different areas, where we have made sure that sufficient water resources are available to sustain the agricultural activity for the next 100 years,” Maghazi said.

He then added that the areas will be cultivated using the latest irrigation techniques to preserve the available water.

The dispute among water experts and government officials in Egypt keeps recurring. The project for cultivating 4 million acres was preceded by other problematic issues regarding projects proposed by the government as part of its plans during the first stage of Sisi’s mandate, including a shipping lane linking Lake Victoria to the Mediterranean Sea.