As the Islamic State continues its relentless campaign in Iraq and Syria, the Iraqi government and the Kurdistan Regional Government are realizing the benefits of cooperation and compromise. 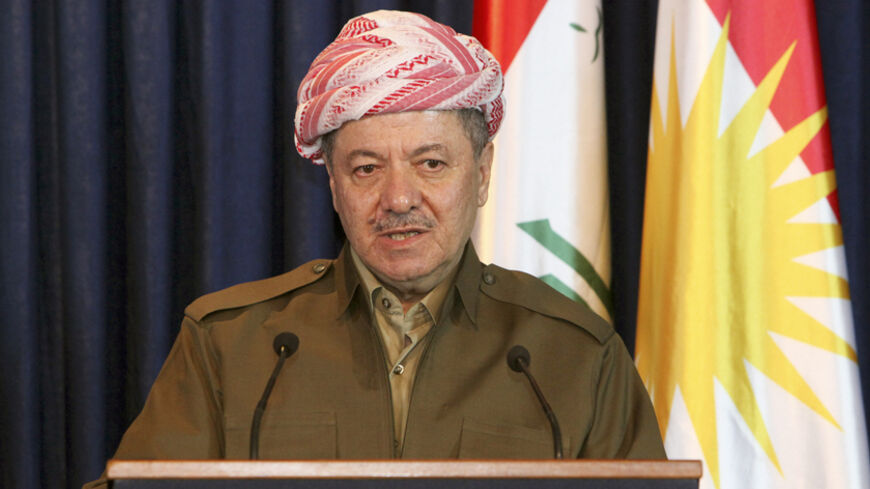 Massoud Barzani, president of the Kurdistan Regional Government in Iraq, speaks during a news conference in Erbil, Sept. 12, 2014. - REUTERS/Azad Lashkari

It was never impossible to repair the long-strained relationship between the Baghdad and Erbil governments. Compromise had always been available to both parties. In light of the current threatening situation and the challenges facing Iraq, such solutions are finally helping to put relations between the Kurdistan Regional Government (KRG) and the Baghdad-based Iraqi central government back on track.

The Kurds have welcomed decisions by Iraqi Prime Minister Haider al-Abadi to release money to pay the salaries of KRG employees, to de-escalate tensions with Erbil and to pledge to work on permanent solutions to crises. There have been significant differences between the two sides for a number of years, but these now appear to be dissipating as the forces of the Islamic State (IS) approach the outskirts of Baghdad and Erbil. This mutual threat has prompted the involved parties to re-evaluate their positions to ensure they can respond to this danger.

When IS took Mosul in June, influential political actors, some of them close to the former government of Nouri al-Maliki, tried to take advantage of the crisis to sever relations between Arabs and Kurds, promoting the idea that Mosul had been invaded with the blessings of the Kurdistan region. Meanwhile, parties in Iraqi Kurdistan tried to take advantage of the IS threat by advocating the declaration of a "state," believing at the time that IS would only pose a threat to Baghdad.

The truth is that IS' advances did not represent a logical or good opportunity for making political gains anywhere. As the Iraqi government initially insisted on escalating the situation with the Kurds, the strained relations between Baghdad and Erbil weakened the Iraqi army in the face of IS' expansion. The military results could have been different had the Iraqi army cooperated with the Kurdish peshmerga sooner than it did, as the peshmerga were incapable of effectively confronting IS without help from Baghdad.

Like in Iraq, no neighboring countries have seen political gains in the IS threat. Instead, they finally began to weigh the danger of the organization, not only to themselves but to the world. US President Barack Obama recently admitted that he and his administration had also misread the situation and did not fully appreciate the threat IS posed from the beginning.

Iraqis — who have been confronting IS for years in its previous incarnations — should have been aware of its capabilities and earlier realized the magnitude of the threat. Both the Iraqi government and the KRG should have been able to assess the danger from the start. Had they done so, IS' position today would have been much different.

All parties are now well aware that they have no other choice but to join hands in cooperation and put aside their differences. They must seek to better their relations, redefining authorities, principles and commonalities.

Relations between Erbil and Baghdad have never been better. There is a great opportunity for both sides to find definitive solutions to the problem of the oil and gas law, which could eliminate several ambiguities defining relations between them. There is also a good chance to solve the crisis of the disputed areas through a realistic plan and vision.

Although Erbil and Baghdad have embarked on a path toward solutions, it does not mean relations have been resolved. This also does not mean that neither will make mistakes that could lead to re-escalation. Nevertheless, the existence of a common desire by both sides to consider solutions, instead of severing relations, remains the best choice for preserving both their interests in the long run.