With the Islamic State at its doorstep, the Kurdistan Regional Government is becoming a constant in the region's new political equations. 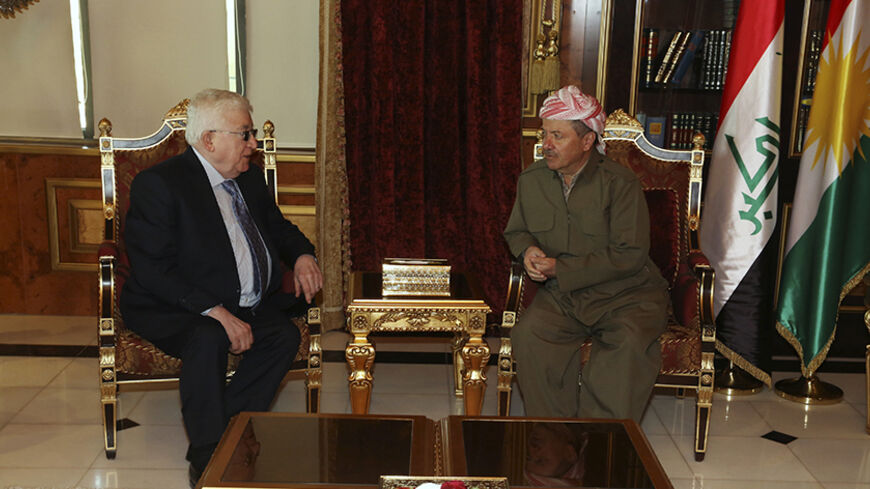 It may not be an exaggeration to state that Erbil is rising as an intellectual outpost in the volatile Middle East. The capital of the Kurdistan Regional Government (KRG) of Iraq, apart from its increased political importance, corroborates this emerging picture of the Kurds as the new constant in a developing regional equation.

While the Islamic State (IS) is only an hour away, political and intellectual life in Erbil is as vibrant as can be. The newly founded Kurdish think tank Middle East Research Institute (MERI) last week organized in Erbil a forum that brought top Shiite, Sunni and Kurdish authorities — including President Fouad Massoum — from Baghdad to mingle with their Kurdish counterparts in Erbil and Suleimaniyah, along with international experts and diplomats. The forum focused on Iraqi reconciliation — Kurds with Arabs and Shiites with Sunnis — and, inevitably, on how to deal with the IS threat.

Everybody, from top officials to ordinary citizens, concedes that, had the American air operation not come to their rescue two months ago, Erbil would have fallen to the advancing IS hordes.

Fouad Hussein, the chief of staff of KRG President Massoud Barzani, told me that, on the fateful night before President Barack Obama announced air operations to halt IS’ advance toward Erbil, he did not sleep a minute, as he was making phone calls to every American official he could reach, asking for help.

The Americans complied, and the Iranians were even quicker, sending a number of aircraft carrying weaponry. The “strategic partner” Turkey, seemingly, lagged behind. When it responded, it was — as has become a label for Turkey — “too little, too late.”

Turkish influence — which is the consequence of the rapprochement between Ankara and Erbil that began in 2009 and continued until August 2014 — is now counterbalanced by Iranian influence.

Nevertheless, the renewed concrete American commitment to the KRG has not only relieved the Kurds from an existential fear but has increased their self-confidence as dependable players in the new regional power game.

Erbil reflects fresh optimism despite the proximity of IS units, which are allegedly commanded by officers of the former Iraqi army of Saddam Hussein. Barham Salih, former KRG prime minister and deputy prime minister of Iraq, shared his optimism with me. He said that within a year or a year and a half, IS in Iraq will be defeated through American military involvement and coordination with the Shiite forces, Kurdish peshmerga and Iraqi armed forces, with training and new equipment.

His optimism stems from his impressions from Washington, where he spent the last two weeks engaging with US officials.

While the IS threat has drawn a reluctant Obama administration into the Middle East quagmire, the IS threat has produced another paradoxical result: Talk of Kurdish independence has withered away, postponing the Kurds' cherished goal indefinitely.

The Kurds have secured American support and are more self-confident than ever, with Erbil serving as a hub for politics, intellectual interaction and a venue for reconciliation among conflicting components of Iraq. Yet, the emphasis on an independent Kurdistan is weaker than it was before IS made advances into Iraqi territory.

At the Erbil MERI forum, Salih was outspoken as he sat next to KRG Prime Minister Nechirvan Barzani at the podium. Salih said that all the Kurds cherish the goal of independence in their hearts, but it is not a viable option for them at this time. The Kurds in Iraq, he stressed, are not in an economic or military position to declare or sustain an independent state. He added that the Kurds should engage with Baghdad, more so than with Ankara and Tehran.

Interestingly, none of the top Kurdish officials present — and there was no shortage of them, including President Massoum, Prime Minister Barzani and his deputy Qubad Talabani, and KRG Minister of Natural Resources Ashti Hawrami — even implicitly contested this argument.

This is indeed a paradox peculiar to Iraq nowadays.

Another paradox in Iraq concerning the Sunnis has either gone unrecognized at the level it deserves to be or has not been seen at all. The new government in Baghdad, formed by Haider al-Abadi to replace the unrepentantly Shiite sectarian government of Nouri al-Maliki, is expected to include the Sunnis that Maliki discriminated against and antagonized (a process that supposedly set the scene for IS’ growth in Iraq). The Abadi government is, just like its predecessor, the product of a tacit agreement between Washington and Tehran. Lacking the support of both, no government can be formed in today’s Baghdad.

The Kurdish and Sunni doubts regarding the inclusive nature of Abadi’s government, so as to prevent the breaking up of Iraq, have not yet been dispelled.

Here comes another peculiar paradox of today’s Iraq: The Sunnis expected to share power in Baghdad do not really represent the Sunni community of Iraq.

In Erbil, I met two of the most prominent Sunni figures of Iraq's political elite: Vice President Osama al-Nujaifi and Speaker of the Iraqi Parliament Salim al-Jabouri.

Nujaifi belongs to a leading Mosul family, and his brother Atheel was the governor of Ninevah province until he fled Mosul, minutes before the second largest city in Iraq fell to IS. Jabouri is from the Diyala governorate, the contested central-eastern Iraqi province that has witnessed bloody sectarian conflict.

I listened to both speak at the MERI forum, where they emphasized the need for reconciliation and pressed for power-sharing to include the Sunnis, and then met with them at a private dinner. Thanks to their titles, the two are considered important Sunni figures in terms of inclusion of the Sunnis and power-sharing agreements.

Both men feel at ease and free in Baghdad and Erbil. A Kurdish official, who wanted to remain anonymous, told me mockingly that the Nujaifis were once known for their rabid anti-Kurdish rhetoric, saying, “Now, they chose to become refugees among us, the Kurds.” Atheel Nujaifi, who evacuated his governor’s mansion in Mosul, which was then occupied by IS, is now a resident of Erbil.

The so-called power-sharing Sunni politicians can commute between Kurdish Erbil and the Shiite-dominated Baghdad, but they cannot travel to the Sunni strongholds of Mosul or the Anbar governorate, which is a half-hour drive from Baghdad International Airport. This is not just due to IS' control of those territories, but also because they do not have a genuine constituency.

So, the Sunni politicians that Washington pushes to engage in power-sharing in Baghdad, so as to diminish the appeal of IS to Sunnis, are not much more than Sunni adornment in a Shiite Baghdad or a Kurdish Erbil.

This Sunni peculiarity makes it quite difficult to regain the territories lost to IS, and puts in doubt the politicians' success at preventing the eventual dismemberment of Iraq.

This leads us the third paradox: Because of such an uncertainty, Erbil-based Kurds are historically closer to their cherished goal of independence, though they may talk otherwise.