The dismissal of Col. Hafez Makhlouf, head of Syria's internal security, may be a sign of reformist policies or even a change of leadership within the regime. 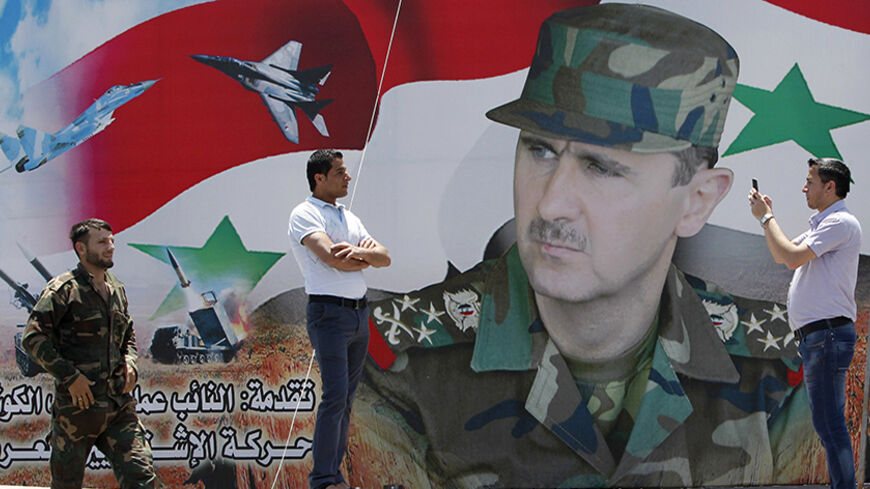 A man takes a photo of his friend in front of a poster of Syria's President Bashar al-Assad at Umayyad Square in Damascus May 16, 2014. - REUTERS/Khaled al-Hariri

Syrian Col. Hafez Makhlouf left Damascus last week through Beirut to relocate to Belarus, with the knowledge of the authorities. This is Makhlouf’s first movement after his dismissal from the Syrian army, which came at his request, as circulated within official Syrian channels. This news will not go unnoticed, as the man in question is highly reputable.

Makhlouf is the cousin of Syrian President Bashar al-Assad. He was, until two weeks ago, the state's most powerful and influential security official. He was also a chief leader in the Syrian conflict that has been ongoing for three years now, given his security position in the capital itself. But all this ended a few days ago. The Syrian army leadership issued a surprise decision to dismiss Hafez.

The dismissal has raised many questions. What will be Makhlouf's fate? What will he do now? Will he return to Syria? Did he abandon the regime or did the regime abandon him?

Hafez is not just an average cousin. The matter is much more complicated. His large family is known to be highly influential in the Syrian and Alawite spheres. He is the brother of prominent businessman Rami Makhlouf, who was put on the Western sanctions list at the beginning of the crisis. Shortly after, it was said that he had given up on the majority of his businesses for the sake of state and the Syrian people. Hafez and Rami were very close to Bashar, as well as his brother Maher and brother-in-law Assef Shawkat (the husband of Bashar's sister Boushra, who was killed July 18, 2012, in a Damascus bombing that targeted a security meeting).

Rami built his reputation on money and business. Hafez, however, was famous in the world of military and intelligence. He moved up the military ladder until in 2008 he was assigned chief of Branch 40, which is affiliated with state security’s internal security unit. This position is important because the branch is in charge of civilian security in Syria. This unit oversees the regime's relations with political parties, trade unions, universities and students. In other words, it manages every aspect of Syrian civil society. Branch 40 is responsible for Damascus, where one-third of the Syrian population resides and half of its students and politicians are located.

Historically, this unit and branch enjoyed broad influence and power within the regime. The late Syrian President Hafez al-Assad assigned his closest confidants to this position, namely Mohammad Nasif Kheir Beik, known as Abu Wael. After Abu Wael retired, Bahjat Suleiman assumed this position, which was a prominent pillar during the beginning of Bashar's era. It was said that Suleiman persuaded Bashar to consent to the formation of civil society committees, which would initiate the 2001 Damascus Spring. Afterward, the old guard, mainly Vice President Abdul Halim Khaddam and former army Chief of Staff Hikmat Chehabi, persuaded the president to ban this movement and reinstate the policy of the iron fist. Suleiman left his position and became ambassador to Jordan, but would relocate to Damascus following the latest crisis.

This is how Hafez was assigned to one of the most powerful military and security positions in Damascus, and was — until two weeks ago — still at the top of it. Makhlouf succeeded in developing this branch and equipping it with the latest security and intelligence technology. Such a security success in a country like Syria creates sensitivities for other branches within the regime and for those concerned with the capabilities of the security apparatus.

This explains why he stepped down, since this step can also be seen as a sign of goodwill from the regime. Internally, the regime is trying to absorb the dissatisfaction and wrath that the Syrian people harbor toward its officials. The regime is also conveying a message to other governments: It is ready to sacrifice and dismiss those who were blacklisted to demonstrate its commitment to initiating a reform process. This was the second step taken in this regard. Another prominent Alawite, Col. Sakr Rustom, chief of the Popular Defense Committees in Homs, was also relieved of his duties.

These developments provoke many questions: Will other figures be dismissed? How could such measures reflect the way Damascus is managing the current crisis? Will it be done in cooperation with foreign powers? Or are these measures the result of the emergence of a new leadership within the regime, created by years of a raging war that was able to impose its new equation?