Will campaign against Islamic State unleash wave of repression?

Human rights advocates on and off Capitol Hill are worried about giving Arab leaders a blank check to go after those they deem "terrorists." 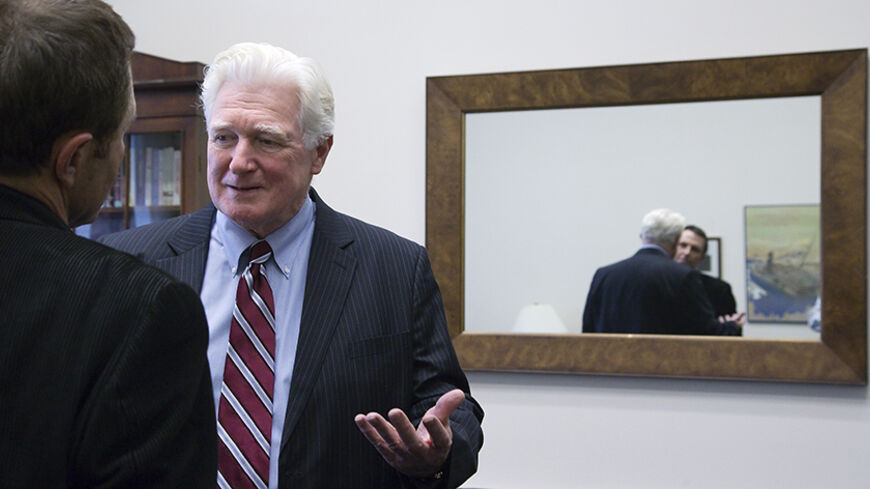 Lawmakers and human rights activists are increasingly concerned that the rush to create a grand coalition against the Islamic State (IS) could empower authoritarian regimes across the Middle East.

The issue has received scant attention in recent weeks as Secretary of State John Kerry has traveled the world in search of allies to combat a group Defense Secretary Chuck Hagel has warned is "beyond anything that we've seen."

As President Barack Obama prepares to unveil his strategy for dealing with IS, however, notes of caution are being raised on and off Capitol Hill about the risks of launching a new global war on terrorists.

"I do think countries have used that label — I think we've done that, too, of people here when we've wanted to suppress dissent," said Rep. Karen Bass, D-Calif., the top Democrat on the House Foreign Affairs panel on human rights. "And so I'm going to be very interested in who's going to be a part of the mix."

Panel chairman Chris Smith, R-N.J., drew parallels to the crackdown on disfavored ethnic groups around the world right after the attacks of Sept. 11, 2001.

"China did it right after 9/11 when all of a sudden they used it against the Uighurs," he said. "We admonished [President George W.] Bush not to allow that to happen; don't let them become part of the coalition and then they go after a lot of good people that are being repressed by the government."

"I don't think there's that vigilance at the White House," he said, pointing to the fact that the country has been without an ambassador for international religious freedom for more than half of Obama's presidency.

They point out that after the Sept. 11 attacks, countries around the world cracked down on dissidents. With the terrorism threat on the rise once again, Egypt has launched a crackdown on the Muslim Brotherhood-affiliated political opposition while Saudi Arabia earlier this year adopted a new anti-terrorism law that has already allegedly been used to imprison a noted human rights activist.

"There's a very significant danger that a rush to action by US policymakers could lead to even more human-rights violations by [Shiite] militias affiliated with the Iraqi central government, or even in other countries — such as Saudi Arabia — where government officials have used anti-terrorism rhetoric to crack down on human rights critics at home," said Sunjeev Bery, Amnesty International's advocacy director for the Middle East and North Africa. "If US policymakers aren't careful, they could end up unintentionally providing the cover necessary for other militias — or even other governments — to violate civilians' human rights."

Marc Lynch, the director of the Institute for Middle East Studies at George Washington University, raised the issue in a Sept. 9 blog post.

"The international pressure on these regimes to ease these abusive practices — already pretty depressingly scant — will probably dry up completely as they sign up for the campaign against the new ISIS threat," he wrote, using an alternate acronym for IS. "That's short-sighted in the extreme, of course, since autocracy, institutional dysfunction, the absence of democracy, disregard of the rule of law, and pervasive abuses of human rights create the environment in which extremist trends thrive in the first place. But it seems pretty likely right now. A new 'war on terror' will probably be just what the counter-revolutionary coalition needed to legitimate their repressive ways and close the book on the hopes of the Arab uprisings — for now."

Even in the United States, recent polling shows concerns for security and civil liberties have flipped, with a 15% increase since last year in the percentage of people who believe government anti-terrorism policies don't go far enough in protecting Americans.

The Obama administration has indicated it's aware of the threat.

Speaking to reporters in Baghdad on Sept. 10, Kerry said the new Iraqi government is determined to be more inclusive than its sectarian predecessor under Prime Minister Nouri al-Maliki.

"The fundamental principle of organization for this entire new government thus far has been we must move in a different direction from the direction that has existed in these last years," Kerry said. "And that direction was one of sectarian division, of exploitation of divisions, of political retribution, even political arrests, political accusations. There were a host of different grievances that had built up that brought people to the brink of an utter breakdown in Iraq."

And Tom Malinowski, the assistant secretary of state for democracy, human rights and labor, testified before Congress on Sept. 10 that IS was as much a perpetrator as a product of human rights violations in Iraq and Syria — a reality the administration intends to take into consideration as it crafts its policy for dealing with the threat.

Still, lawmakers say there's little the United States can do to prevent abuses in the name of the fight against terrorism.

"I think that you could well see a fair amount of that. I'm not sure there's a lot you can do about it," said Rep. Jim Moran, D-Va. "You have to kind of accept the judgment of the governments of these countries — it's really up to their leaderships. But of course if it gets too pronounced, there's going to be too much of a backlash. If they go after people on false pretenses, invariably that comes back to bite you."

Outside activists, however, don't think Congress is impotent.

"There's definitely things lawmakers can do on the front end," said Amnesty's Bery. "They can establish limits on how any anti-terrorism funds are used to prohibit them from going to governments, ministries that have a track record of internal repression, that's one thing."

Bery continued, "Lawmakers can prohibit the transfer of US weapons or military aid to governments or other militaries that cannot definitely show that the weapons won't be used in substantial human rights violations against civilian populations. Lawmakers can establish a condition that no US military aid will be transferred to the Iraqi central government until the Iraqi central government shows a substantial commitment to stop using indiscriminate weapons in parts of Iraq where it is fighting — allegedly fighting — Islamic State militias."

It all comes down to a matter of priorities, said Rep. Adam Smith, D-Wash., the top Democrat on the House Armed Services Committee. And right now, the priority is defeating IS.

"It's hard for the US to simply force other countries to change the way they behave," he told Al-Monitor. "We're going to try — we're going to put pressure where we can — but it's a balancing of interests. And right now getting rid of ISIS is a pretty high priority."