The United Nations is ready to lift the arms embargo on Libya. Congress, not so much. 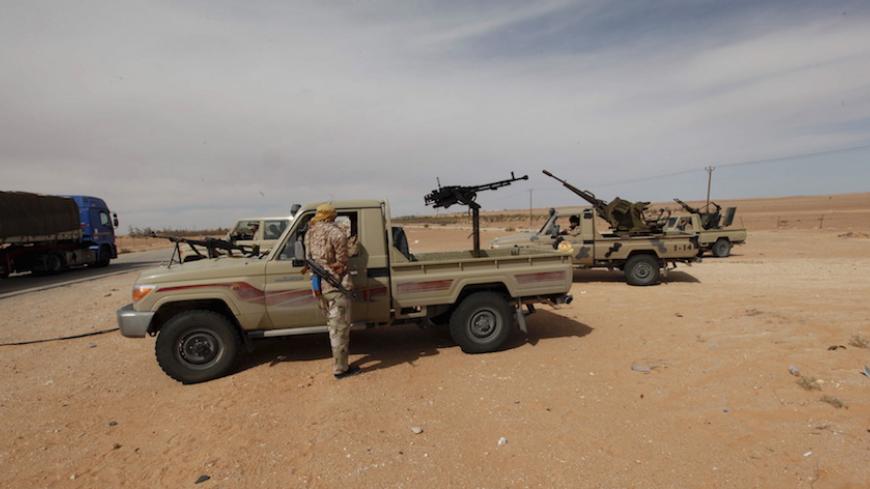 Libyan military vehicles are pictured at a checkpoint in Wadi Bey, west of the Islamic State-held city of Sirte, Feb. 23, 2016. - REUTERS/Ismail Zitouny

The United Nations' readiness to lift the international arms embargo on Libya landed with a thud in Congress, where lawmakers were either blindsided by the announcement or downright skeptical.

A grand coalition including the United States, European Union, African Union, League of Arab States and several of Libya's neighbors came together May 16 in Vienna to endorse the coalition Government of National Accord in Tripoli and urge the UN to relax the embargo that has been in place since the 2011 uprising. Many lawmakers, however, remain concerned that blanket support for the fledgling government could lead to weapons ending up in the wrong hands and perhaps trigger greater US involvement in that country's messy conflict.

"This is an incredibly fragile government. I hope that we ask some very tough questions before we start arming a government that's on ice that's still pretty thin," said Sen. Chris Murphy, D-Conn. "Congress has abdicated its responsibility to oversee weapons sales. I think it's about time that we get back into the game and oversee what has been a fairly significant ramp up of weapons sales to the region."

Murphy has taken the lead in questioning US bomb sales to Saudi Arabia for its campaign against the Houthis in Yemen.

Even lawmakers who are fully supportive of the Obama administration's strategy in Libya raised concerns.

"I think it's something Congress needs to look at and evaluate, and then decide what to do," said Rep. Eliot Engel, D-N.Y., the top Democrat on the House Foreign Affairs Committee. "It's not black and white. We want to see Libya succeed. We want to see ISIS [Islamic State] driven out of Libya. But … I think we need to be very careful."

"I heard some rumblings in that regard," said Sen. Jim Risch, R-Idaho, the chairman of the foreign relations panel on the Near East. "I guess I'm a little surprised that they've actually pulled the trigger."

The international community argues that arming the new government is vital to restoring security and defeating IS. The new government announced earlier this month its intention to create a "presidential guard" to protect "government buildings, border posts, vital installations and VIPs."

"We’ve called for lifting the embargo on arms to support the joint command and the military establishment," Libyan Prime Minister Fayez al-Sarraj said in press remarks May 16. "We’ve called for equipping and arming … the presidential guard, which will have a clear role in fighting extremism and securing key institutions, and it’s not a substitute to police or the army."

Secretary of State John Kerry supported the move at the same press event.

"We know that the Pentagon lost track of about 190,000 AK-type assault rifles and pistols in Iraq. We know that it lost track of more than 40% of the firearms provided to Afghanistan’s security forces. And we know that the Pentagon is unable to account for more than $500 million in US military aid given to Yemen," Action on Armed Violence Executive Director Iain Overton said in remarks carried by the Washington-based Forum on the Arms Trade. "What are the chances, then, of a headline in five years' time stating that the Pentagon has lost millions of dollars' worth of guns in Libya? And then we wonder how Islamic extremist militant groups are so heavily armed."

"The West's provision of arms into Libya has been devastating to the country for years," he said. "When NATO airstrikes were launched in support of rebels fighting Col. [Moammar] Gadhafi, they first had to target weapons, including ground-to-air missiles, that the West had supplied to Gadhafi. On the dictator's overthrow, the huge number of surplus weapons provided to him soon found their way onto the black market. Will the West never learn that pouring weapons into an existing conflict only results in that conflict becoming bloodier and longer?"

Further compounding the difficulty of the Obama administration's sales pitch on Capitol Hill is the fact that many lawmakers objected to the 2011 intervention in the first place. Three years after the Sept. 11, 2012, death of US Ambassador Chris Stevens in Benghazi, Republicans are still probing the matter with some pinning the chaos caused by the proliferation of well-armed militias squarely on then-Secretary of State Hillary Clinton, now the Democratic presidential front-runner.

Those concerns are hardly alleviated by the ongoing chaos in Libya, where Khalifa Hifter — a former Gadhafi loyalist who later turned on Gadhafi — continues his battle against Islamic militants, unsanctioned by the new government. The international community flatly acknowledged the issue May 16.

"We have to cooperate on security to make possible a Libyan ownership of the anti-terrorism fight. … We will look for inclusiveness of all the subjects that are on the field fighting [IS], including Gen. Hifter," said Italian Foreign Minister Paolo Gentiloni. "But this will be something based on the authority of the Government of National Accord and on the support, the international support, to [the Government of National Accord]."

Kerry also acknowledged the rough road ahead to ending five years of chaos in Libya.