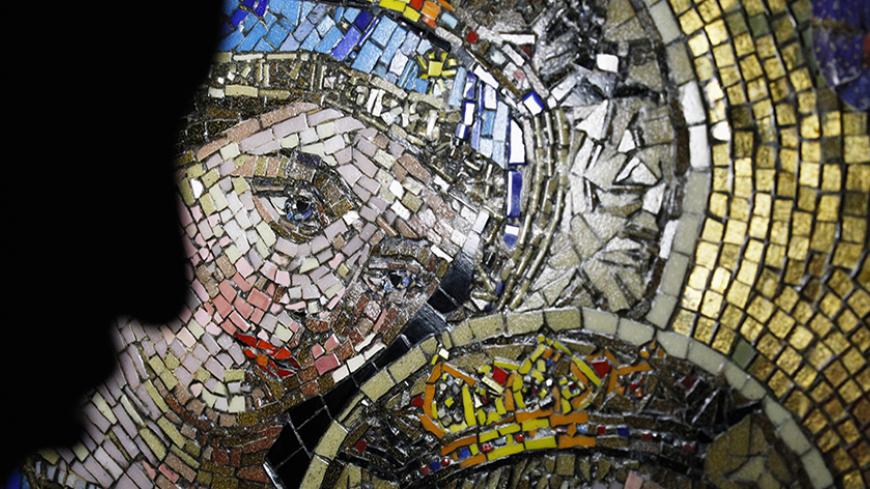 A visitor passes an image of the Virgin Mary, as thousands of Egyptian Copts celebrate the Feast of Assumption at the Virgin Mary Church in Mostorod, east of Cairo, Aug. 22, 2014. - REUTERS/Mohamed Abd El Ghany

Congress is giving short shrift to a federal commission’s conclusion that religious freedom in Egypt remains in jeopardy one year after Abdel Fattah al-Sisi won the presidency.

The US Commission on International Religious Freedom for the fifth year in a row is recommending that the State Department categorize Egypt as a “country of particular concern” subject to sanctions. The Obama administration has repeatedly ignored that advice, and even those lawmakers most invested in the issue of religious freedom hope to keep it that way.

"I think that Egypt is probably in the past year or so the most improved country in the world given where they were under the leadership of the Muslim Brotherhood," said Rep. Trent Franks, R-Ariz., the chairman of the International Religious Freedom Caucus. “When they’ve changed directions in such a positive way, we need to encourage them to continue and not slap them in the face.”

The report, released April 30, praises Sisi’s calls for religious tolerance but faults Egyptian authorities for failing to do enough to protect religious minorities — particularly Coptic Christians — and their property and places of worship. It also raises concerns with growing state control over mosques and a crackdown on dissent associated with the fight against extremism.

“Discriminatory and repressive laws and policies that restrict freedom of thought, conscience, and religion or belief remain in place,” the report found. “Egyptian courts continue to prosecute, convict, and imprison Egyptian citizens for blasphemy, and new government initiatives to counter atheism emerged during the year.”

The Egyptian Embassy in Washington did not reply to requests for comment.

The commissioners “don’t have their head screwed on straight,” said Rohrabacher, who co-founded a new pro-Egypt parliamentary group last year. “You’re going to weaken someone who actually will bring fundamentally more freedom to a country because of his imperfections and strengthen the hand of radical Islamists.”

The comments highlight that US lawmakers are giving more weight to stability over human rights as they ponder how to treat Egypt after the overthrow of President Mohammed Morsi. With Sisi in power, Egypt is once again working closely with Israel while battling Sunni Islamists and Shiite rebels from Libya to Yemen.

“Egypt has been a reliable ally and hopefully they will move toward greater democracy. But the stability right now is very important,” said religious freedom caucus member Nita Lowey, D-N.Y., who played a key role last year in unblocking military aid for Egypt in her role as the top Democrat on the spending panel.

“They have been a steady ally and that’s what we need in that region,” Lowey told Al-Monitor on May 1. “Things have improved … and I think it’s very important that we maintain a relationship.”

Several of the nine commissioners agreed.

"The challenges facing the government of Egypt at this time are to defeat the terrorist threat they are facing, rein in their judiciary, restore rights to civil society, grow the economy and move quickly to complete their ‘road map’ by electing a new parliament,” said dissenting commissioner James Zogby, who was appointed by President Barack Obama. “This will do more to advance religious liberty than imposing the ill-timed and uncalled-for sanctions that might result from a CPC [country of particular concern] designation."

“Let us be clear that we are no fans of the Sisi regime, which is guilty of systematic abuses of human rights that merit the strongest condemnation,” they wrote in an additional statement separate from Zogby’s. “But we also are not fans of making recommendations that, if implemented, would risk sending a confusing and counterproductive message.”

“In a time of turmoil, what they’re suggesting will create more dictatorship, more death, more radical Muslims killing Coptic Christians,” he said. “I believe in the long-run his goals are to have a much freer society than what the Muslim Brotherhood under Morsi would ever have done.”

“The whole idea … should have absolutely nothing to do with any political concern,” said Rep. Chris Smith, R-N.J., who chairs the House Foreign Affairs panel on international human rights. “[The State Department] should take the advice. Friends don’t let friends commit human rights abuses.”

“Even for those who are strong proponents for President al-Sisi, I think if you want him to succeed you’re not doing him or Egypt or us a favor if you find yourself soft-pedaling serious human-rights abuses,” Connolly said. “I think it is a country of concern.”