Egypt Caucus gets off to rough start 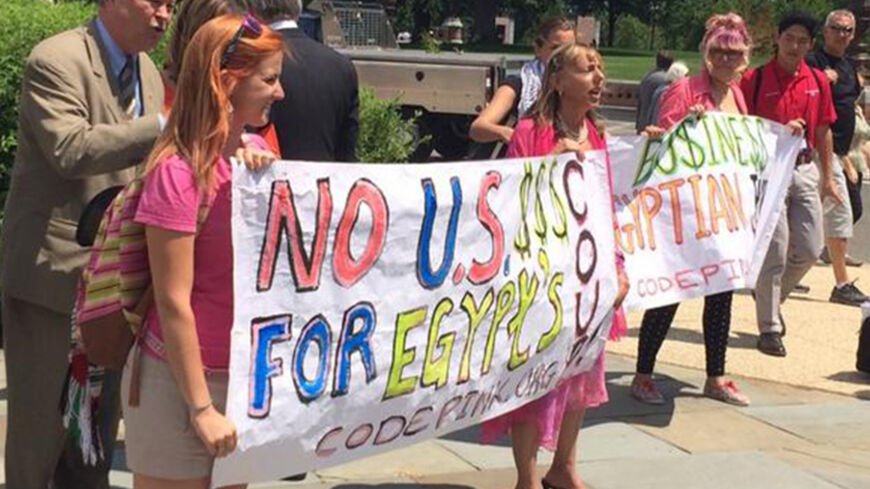 The launch of a new Congressional Egypt Caucus was disrupted by anti-war protesters on July 16, highlighting the intensifying opposition to America's $1.5 billion a year in military and economic support to the country.

The bipartisan group of four conservative Republicans and California Democrat Loretta Sanchez launches just as Senate appropriators voted to cut aid by $400 million and the Obama administration is holding up weapons deliveries, including Apache attack helicopters. The Republican members made clear that their goal in forming the Caucus was to push back against criticism of President Abdel Fattah al-Sisi, repeatedly praising him as a key ally in America's fight against Islamist militants.

"Unfortunately, as Egypt seeks to defend itself from the terrorist threat, especially that in the Sinai Peninsula, American support has not matched the danger," said caucus co-chairman Dana Rohrabacher, R-Calif.

"We need this caucus now more than ever," added Rep. Michele Bachmann, R-Minn. "What President al-Sisi is trying to do, quite frankly, is to set Egypt on a positive path toward prosperity and growth and peace in the Middle East region."

A half-dozen Code Pink protesters sought to disrupt the news conference with banners demanding an end to US support for "Egypt's coup." One protester dressed up in military fatigues and oversize sunglasses meant to symbolize Sisi; Egyptian supporters of the new president yelled back with chants of "Iran out, Muslim Brotherhood out," further adding to the chaos.

The Republicans in the caucus, that also included Texas Republicans Steve Stockman and Louie Gohmert, took turns lambasting the protesters as "complicit" with Islamist radicalism. They all met with Sisi during trips to Cairo in December or January, before his election to the presidency, as did Sanchez.

"More people turned out in the revolution for Sisi than did for [former President Mohammed] Morsi," Stockman said. "This was not a coup, but a revolution."

"It's going to be a fight to keep Egypt from falling back in the hands of radical Islam," said Gohmert.

"President al-Sisi and his government are a source of hope for the people of Egypt and the Middle East," Rohrabacher said. "Prosperity, democracy and human rights are not out of reach in Egypt. If this government succumbs to radical rule it will be a profound blow to the people of Egypt and to all free people everywhere. We will stand or fall together."

Sanchez, a member of the House Armed Services Committee, took a different tack. She said she lived in Egypt in 1979-80, right after the peace treaty with Israel, and still has friends there.

"My biggest concern is really the economics for the people, and that won't happen until there is stability in Egypt," she told Al-Monitor in an interview after the news conference. "So if al-Sisi can bring about stability without trampling on people's human rights, then I'm willing to listen to him and consider some of the things he thinks he needs."

While much of the Code Pink criticism was aimed personally at her — "You shame California," they chanted — Sanchez said her presence on the caucus would help ensure that it is more than just a cheerleading squad for Sisi. She said she was scheduled to meet with President Barack Obama in the afternoon and might tell him about the new caucus.

"One of the reasons that I'm in the caucus is to ensure that all situations are looked at — that it's not just about giving military aid to Sisi, that it's about what's good for the Egyptian people," she said.

"One of the first [events] we want to do is a discussion of the human rights situation in Egypt. See, if I wasn't in the caucus, then that might not be brought up by Mr. Rohrabacher and Ms. Bachmann. But because I'm a co-chair I get to set part of the agenda, so that will be one of the first things that we want to discuss and to get some experts in on what's really going on, maybe make an agenda plan of what to ask al-Sisi to do: Maybe he's got to release people and other issues. That's what a caucus is for: It's to get more information, it's to talk to our colleagues, and it's to develop an action plan that it is in my hope will help the Egyptian people."

by Murielle KASPRZAK and Joseph SCHMID | AFP | May 26, 2022
END_OF_DOCUMENT_TOKEN_TO_BE_REPLACED