Seventy members of Congress are asking US President Barack Obama to raise concerns about human rights during his meetings in Saudi Arabia on Friday. 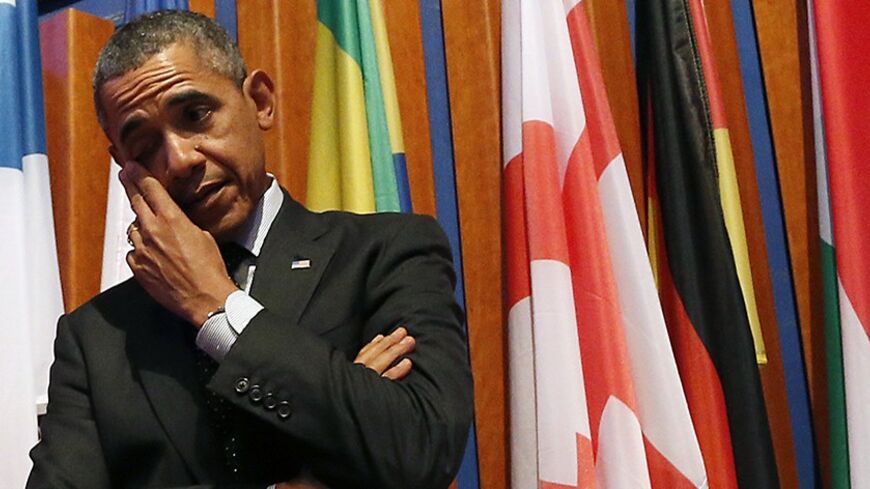 US President Barack Obama wipes his eye after the closing session of the Nuclear Security Summit in The Hague, March 25, 2014. Obama is on a weeklong trip to the Netherlands, Belgium, Italy and Saudi Arabia. - REUTERS/Frank Augstein

An unusual alliance of conservative Christian Republicans and liberal Democrats are putting pressure on President Barack Obama to publicly address human rights violations when he visits Saudi Arabia on Friday, March 28, further complicating the president’s effort to mend bridges with the kingdom.

A total of 70 House members have signed on to a letter to the president being circulated by Reps. Trent Franks, R-Ariz., and Jim McGovern, D-Mass..

The letter, which was first made public by Al-Monitor last week, has been endorsed by groups as varied as Amnesty International, the National Organization for Women and Voice of the Martyrs. It calls on the president to denounce the “systematic human rights violations targeting women, religious minorities and peaceful political reformers.”

“If your administration has previously raised such concerns through private channels,” the letter states, “the Government of Saudi Arabia’s grave human rights record reveals its willingness to ignore such advice.

“Consequently, we urge you to combine symbolic actions with direct advocacy for human rights reforms. It is time to publicly demonstrate US support for those in Saudi Arabia who are willing to take such risks to advance fundamental rights in their society.”

The letter also encourages Obama to meet with women who are fighting for the right to be able to drive. And Amnesty sent an action alert to its members last week asking them to press the president to have a female Secret Service agent be his driver on his trip.

The congressional pressure comes as the White House is eager to mend ties that have frayed over the past few years because of a series of US policies that have antagonized Saudi Arabia. These include nuclear negotiations with Iran, perceived US support for the former Muslim Brotherhood government in Egypt and criticism of the subsequent military crackdown, and US reluctance to get involved in rebel efforts to topple Syrian President Bashar al-Assad.

“This is the beginning of an expression of popular concern articulated through the US Congress about that relationship,” predicted Sunjeev Bery, the advocacy director for Middle East and North Africa at Amnesty International USA. “The Saudi Arabian government’s repression is so bad across so many fronts that it has created an environment in Washington, DC, where multiple groups representing multiple communities are all pushing Congress at the same time.”

Because of Saudi Arabia’s oil wealth, however, congressional levers remain limited — a state of affairs that has suited the desert kingdom and successive US administrations just fine.

The country planned to buy $86 billion worth of US military equipment — including $29 billion worth of F-15 fighter jets and equipment and $26 billion worth of helicopters — between October 2010 and December 2013, according to the Congressional Research Service. Meanwhile, the Obama administration has only asked for about $10,000 worth of military training assistance in its annual budget requests — a nominal amount that, however, makes Saudi Arabia eligible for a steep discount on the millions of dollars of training it buys through the Foreign Military Sales program, according to Congress’ research arm.

“Saudi officials have been privately critical of the congressional prohibitions and appear to prefer to avoid contentious public debate over US foreign assistance, arms sales and security cooperation,” states a February 2014 CRS report. “The Saudi-funded nature of the US training reflects Saudi Arabia’s ability to pay for the costly programs. It may also point to a shared view among Saudi leaders and successive US Administrations that US-funded programs would be more vulnerable to potential congressional scrutiny and pressure.”

Obama’s trip got off to an inauspicious start on Monday when Saudi Arabia denied a visa to a Jewish reporter for the Jerusalem Post who was supposed to cover the president’s trip, drawing vocal protestation from the US administration.

Separately, the Foundation for Defense of Democracies released a report on Tuesday describing a US government study of bigoted Saudi school textbooks that the State Department has sought to keep secret.