High stakes for Erdogan in fight against IS

Turkish President Recep Tayyip Erdogan turns hawkish on the Islamic State, but he is aware that the stakes are high if Ankara joins the war against the group. 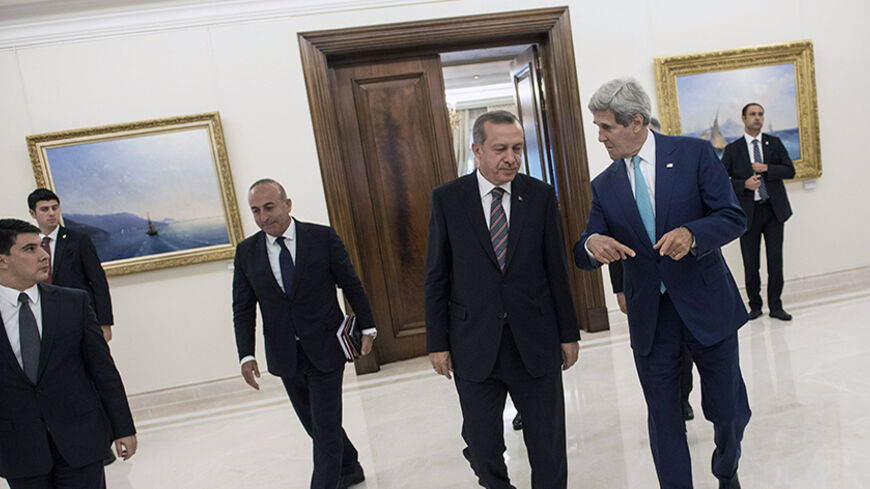 Newly elected President Recep Tayyip Erdogan never made it a secret that he intends to exercise executive powers as president, even if Turkey does not have a presidential system, and has started to do this with regard to combating the Islamic State (IS).

Like Turgut Ozal, who was the Turkish president during the 1990-91 Gulf War, Erdogan has effectively taken the reins of power and is making policy.

Erdogan is engaged in transforming Turkey from the reluctant ally against IS — as it appeared to be in Western eyes, mainly because of the hostage crisis at the consulate in Mosul — to a determined one that will play an active role in the US-led military coalition against IS in Iraq and Syria.

He is also trying to garner public support by stressing that Turkey is a key regional country with a powerful military that cannot stand idly by as IS wreaks havoc on its borders and poses threats to its national security and domestic stability.

According to a Foreign Ministry source in Ankara, diplomatic feedback shows that Western countries are also not averse to Erdogan determining policy in this manner. “They prefer a strong interlocutor who can get results, and they see that potential in Erdogan,” the source, who wished to remain anonymous because he is not authorized to make public statements, told Al-Monitor.

Tellingly, Philip Gordon, a special assistant to US President Barack Obama and White House coordinator for the Middle East, North Africa and the Gulf region, was quoted in the Turkish press on Sept. 30 saying Turkey’s role against IS was critical.

Gordon reportedly said during a panel discussion at the Center for International and Strategic Studies in Washington on Sept. 29 that the response to IS could not just be seen as a military one. It has to also consider the ideological dimension, the question of foreign fighters and the prevention of oil sales by IS.

According to Gordon, Turkey is a vital partner in all of these areas and Washington will be working closely with it. Prior to leaving New York on Sept. 26, after attending the UN General Assembly, Erdogan held a phone conversation with Obama and met with Vice President Joe Biden to discuss these issues.

Erdogan has also been using his public speeches since coming back to Turkey to drum up support for participation in the US-led coalition against IS. “We have a Turkey whose views, warnings and strengths are needed in solving regional crises,” Erdogan told a meeting of Turkish exporters on Sept. 28.

He said this was made clear to him at the UN Security Council meeting on foreign terrorist fighters Sept. 24, which was chaired by Obama, where Erdogan was also invited to speak. “All the participants repeatedly said Turkey has to get involved in this matter. Their understanding is: ‘We can only do this with a leadership that Turkey is also involved in,'” Erdogan said.

In his opening speech for the World Economic Forum meeting in Istanbul, also on Sept. 28, Erdogan struck a more hawkish tone, saying the fight against IS must be maintained with determination.

He stressed that a ground component to this fight would be essential, because airstrikes alone would not be enough to do the job.

“Let's not fool ourselves, we cannot stay out of this,” he said before announcing that Ankara would assess this week what its participation in these operations will be. Erdogan also blasted at critics in the West and at home for claiming that Turkey was soft on IS.

He said Turkey had to act cautiously before because of the 46 Turks being held by IS, including the Mosul consul general, after they were taken hostage in June. He said those who claimed Turkey was soft on IS would be embarrassed now that the hostages had been freed.

Turkey’s participation in the anti-IS coalition will also be debated in parliament this week, where the government will seek authorization to engage the Turkish military in this effort. As Tulin Daloglu explains in her Al-Monitor article on the subject, the opposition remains opposed to this engagement.

There is also opposition from Turkey’s Kurds who believe that Ankara is only trying to get involved militarily in Syria and establish a buffer zone there ostensibly for refugees, to prevent Syrian Kurds from gaining an autonomous status similar to that of the Kurds in northern Iraq.

The government nevertheless has enough parliamentary seats to overcome these hurdles, but may have to convince some of its own deputies. Erdogan and Prime Minister Ahmet Davutoglu have to convince a wary public, especially when there are military and security experts who are sounding warnings about the potential threats Turkey will face if it goes to war against IS. One such expert is retired Maj. Gen. Armagan Kuloglu, a well-known commentator on military and security matters.

Asked to list some of the dangers, Kuloglu told Al-Monitor that the first risk he sees involves possible attacks against Turkish diplomatic missions abroad. The overrunning of the Turkish Consulate in Mosul by IS in June, he said, has established a precedent in this regard.

He went on to note the potential risk to domestic security. “There are people in Turkey who feel sympathy for IS, which is recruiting militants in this country. No one can guarantee that some of these people will not engage in acts of terrorism within Turkey,” Kuloglu said.

Pointing out that Obama has said this fight could take years, Kuloglu said, “It is not clear who Turkey will be fighting against, and how success will be measured.” Reflecting the view of the opposition and many Turkish commentators, Kuloglu added, “It is best for Turkey not to get involved militarily and to find other ways to assist its allies, unless it is attacked.”

He also maintained that it was not clear who would be the main beneficiary from such an open-ended war against IS. “A principal beneficiary could be the Syrian Kurds who may decide to emulate the Iraqi Kurds and gain territory and international recognition. … This could pose security threats to Turkey in the future when seen together with an all but independent Kurdish northern Iraq, and the fact that Kurds in Turkey may seek broader autonomy under the government’s current Kurdish opening,” Kuloglu said. His remarks reveal that the fear in Turkey’s nationalist circles of a “Greater Kurdistan” still persists.

If we are to go by Erdogan’s words, however, “the arrow is about to leave the bow,” to quote a Turkish saying that indicates a point of no return is about to be reached. Erdogan seems determined on this score, but he too is aware that the stakes are high for him and the ruling Justice and Development Party (AKP), which faces general elections nine months from now.

If Turkey’s engagement against IS produces positive results, this will not only strengthen Erdogan’s hand at home but also help him regain his reputation in the West as an important regional player. If, however, this engagement aggravates Turkey’s refugee problem, endangers its security and harms the “Kurdish opening,” this could harm his reputation at home, even among supporters, as well as the AKP’s chances in the elections.

Erdogan nevertheless appears ready to take the plunge, most probably because Turkey has limited options as the serious threats to it as a result of IS continue to grow.