Ankara is being forced to get off the fence and join allies against the growing threat from IS and similar groups. 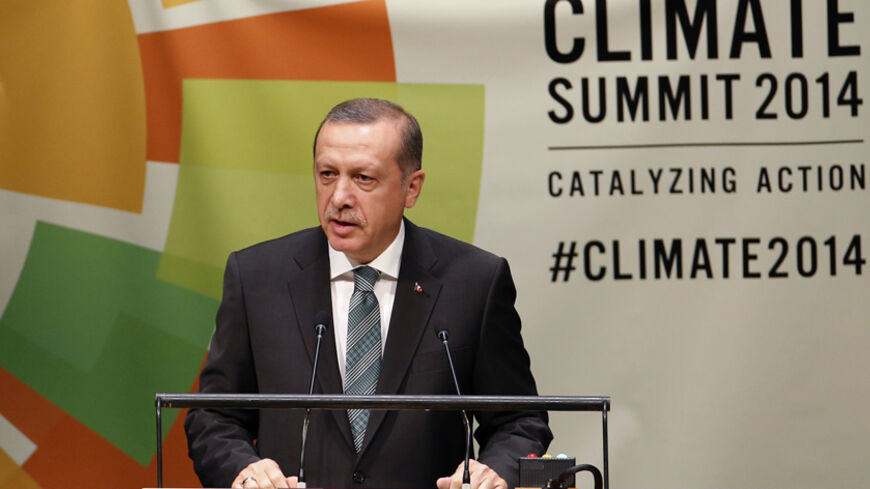 After much speculation about where it stands, Turkey is now signaling that it will no longer sit on the fence regarding the Islamic State (IS) and will participate in efforts against it in any way needed.

Ankara has finally taken a position after securing the release of 49 Turkish hostages, including its consul general, who were kidnapped in June as IS overran Mosul. Ankara’s decision also comes after IS achieved serious recent advances in northern Syria, forcing hundreds of thousands of mostly Kurdish refugees to flee toward the Turkish border.

President Recep Tayyip Erdogan, who's in New York for the UN General Assembly, has offered Turkey’s strong backing for the military strikes against IS positions in Syria by the United States with support from Saudi Arabia, Jordan, the United Arab Emirates, Qatar and Bahrain.

“This step taken against this target, this action against terrorist organizations, is one that we, too, approach in a positive manner. I think it will be wrong if there is a serious lapse after such a step has been taken. This road map must be followed with determination,” Erdogan said during a panel discussion organized by the Council on Foreign Relations on Sept. 23.

Erdogan said that Turkey’s contribution to the coalition would be discussed by the government after he returns to Ankara, adding that Turkey was “ready to fulfill its duties.” Asked if this contribution would be military, Erdogan’s response appeared unequivocal. “My friends, this will cover everything. Military, political, everything …”

Turkey was criticized in the West and the region for refusing to sign a joint communique in Jeddah on Sept. 11, in which the United States and 10 Arab countries declared their “commitment to stand united against the threat posed by all terrorism, including the so-called Islamic State in Iraq and the Levant.”

Turkey has also been accused of turning a blind eye to IS activities on its territory and of having actively aided it and similar radical groups in the hope that they would help defeat President Bashar al-Assad in Syria.

Ankara has strongly denied these allegations and defended its cautious approach to IS, as well as its refusal to sign the Jeddah Communique, saying that it did not want to endanger the Turkish hostages' lives.

Critics at home and abroad have nevertheless questioned whether the government was using the hostage crisis as a cover for inaction against groups it believed are effective against the Assad regime.

Erdogan’s remarks in New York have yet to translate into concrete action. They nevertheless involve the clearest language to date on the topic and are expected to help staunch the flow of negative publicity Turkey has been receiving in the West about Ankara’s alleged soft stance on IS.

Remarks by US Secretary of State John Kerry on Sept. 23 also suggest that Ankara has assured Washington it will display a much more robust stand against IS now that its hostages are free.

“Turkey is very much part of this coalition and Turkey will be very engaged on the front lines of this effort,” Kerry said during a UN global counterterrorism meeting. “Turkey had an initial challenge with respect to its hostages, and that being resolved now, Turkey is ready to conduct additional efforts along with the rest of us in order to guarantee success. And we’re very grateful to Turkey for that willingness," Kerry added.

Ankara is also gaining international sympathy for hastily taking in what could end up being up to 200,000 Kurdish refugees from the Kobani region of northern Syria, even though it's already grappling with the adverse effects of the estimated 1.5 million refugees it has taken in since the beginning of the Syrian crisis.

Diplomats in Ankara are trying to understand if Turkey’s new position on IS and other radical Islamist groups like Jabhat al-Nusra in the region is because of the resolution of the hostage crisis or based on broader considerations.

Turkey has isolated itself to a great extent in the region over what has come to be seen as its pro-Sunni and pro-Muslim Brotherhood policies, which have not only alienated Tehran and the region's Shiites, but also many Sunni regimes that are strongly opposed to the Brotherhood.

The US-led operation against IS and other radical groups in Syria, with active participation by five key Arab countries, was also set to increase Turkey’s isolation, leaving it looking like the weak link in the fight against terrorism.

There are those in Ankara who believe the government could no longer risk the appearance of sitting on the fence and expecting others, including key Islamic countries, to confront the IS threat. This, they argue, would have diminished even further what little influence Turkey has left in the Middle East.

Turkey is also one of the countries bearing the brunt of IS activity, as the latest stream of refugees from northern Syria shows. The fallout on various levels from advances by IS in Iraq and Syria is making the situation on Turkey's borders more complicated by the day.

Developments clearly underline the fact that Ankara needs international support on a number of fronts to confront this situation. This, however, requires in turn that Turkey contribute to international efforts, especially now that key Islamic countries are working with the West on the IS threat.

The general turn of events also requires that Ankara adopt more flexible and multidimensional policies in the region and tone down some of the policies it has been pursuing over these past two years. For one thing, its regional coalition partners, if it is to join the fight against IS in earnest, include countries that are vehemently opposed to the Muslim Brotherhood and support the Egyptian government’s banning of the group.

Even Qatar, which like Turkey has been a staunch Brotherhood supporter, was forced by other Gulf states to expel Brotherhood leaders. Recent remarks by Erdogan suggest that Turkey might host these leaders now, but this may become more difficult as IS developments unfold.

Turkey is also going to have to come to a different understanding on the Kurdish groups in northern Syria fighting against IS. Ankara has largely seen these groups as extensions of the Kurdistan Workers Party (PKK), which the Turkish military has been fighting since the mid-1980s.

These groups are nevertheless gaining legitimacy in Western eyes as key elements of the anti-IS coalition in Syria. Ankara will also have to accommodate this change, loath as many Turks may be to entertain the notion that the Turkish military and PKK-affiliated groups could end up fighting on the same side against a common enemy.

There is speculation in the West over whether the US-led operations against IS in Iraq and Syria will have the desired effects or simply aggravate the situation. There are also Turkish commentators who do not want to see Ankara involved in this fight.

It's also not clear how the ruling Justice and Development Party’s Islamist roots will respond to active participation by Turkey against IS and other such Islamic groups, regardless of how radical they may be. Developments have shown, however, that Turkey is not as influential on its own in the region as it may have once thought, and that it has little choice but to move back to the multilateral track.

This means it has no choice but to act with regional and global allies to confront situations that pose a danger to its national security.