Doubt is spreading that the new administration in regionally isolated Turkey will rise to meet its long list of formidable challenges that require international cooperation. 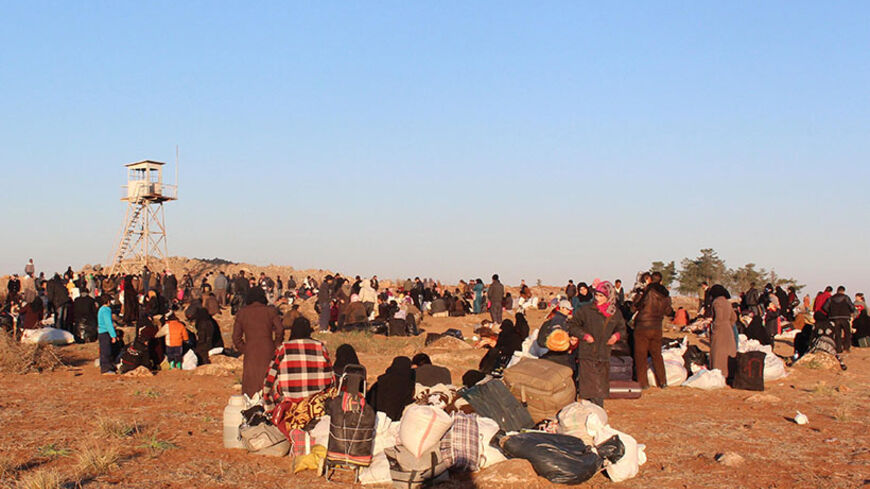 Displaced Syrian families gather next to a Turkish watchtower as they hope to cross the border into Turkey near the northern Syrian village Shamarin, Feb. 5, 2014. - BARAA AL-HALABI/AFP/Getty Images

Turkey is facing a set of challenges in the Middle East, largely but not entirely because of the advent of the Islamic State (IS), which it never expected to face two years ago. Prime Minister-designate Ahmet Davutoglu will have to chart a new course through the turbulence in the region that has started to pose serious threats to Turkey.

Experts do not appear hopeful that the Davutoglu government, which will operate under the tutelage of President-elect Recep Tayyip Erdogan, can rise to the occasion. The expectation is that Erdogan and Davutoglu will be preoccupied with the 2015 general elections and have little time to spend on foreign policy.

Wolfango Piccoli, a Turkey expert at the US-based consulting firm Teneo, also sees a risk of further slippage. In an assessment made available to Al-Monitor, Piccoli wrote: “Looking ahead, no major deviations are to be expected from the overall policy path under Erdogan’s presidency. However, there is a growing risk that the policy-making process will become further de-institutionalized, thereby making it more opaque, unpredictable and susceptible to Erdogan's personal views.”

If this assessment is accurate, Turkey’s inability to respond to crises on its borders will only grow. The situations in Iraq and Syria remain Ankara’s most important challenges today. Pleased to see Iraqi Prime Minister Nouri al-Maliki go, Ankara is closely following Prime Minister-designate Haider al-Abadi’s efforts to form a new Cabinet.

Ankara also notes that the United States and Iran are moving closer, having arrived at similar positions on the need for a strong government in Baghdad and a unified front against IS. Not everyone in Ankara is happy to see Iran — with whom Turkey has a major disagreement over Syria — assume an important role in Iraq at a time when Turkey is largely isolated in the region.

Sources close to the Turkish Foreign Ministry nevertheless say that Ankara also wants a stable government in Baghdad, and believes this can only be achieved by the participation of all of the country’s ethnic and sectarian elements. Turkey's position holds that the attempted disenfranchisement of the Sunnis by Maliki spawned radical elements such as IS.

Ankara will still have to court Iraqi Shiites, who have come to oppose Turkey for what they see as its pro-Sunni meddling in Iraq and Syria. Turkey’s independent ties with the Iraqi Kurds also remain a bone of contention between Ankara and Baghdad.

It's not assured, therefore, that a new government under Abadi will automatically be favorable toward Turkey. Ankara clearly has some bridge-building to do in this respect. Turkey’s immediate focus in Iraq and Syria, however, is on advances by IS, especially along the borders.

The group is still holding Turkey’s consul general to Mosul and 48 others it abducted in June hostage, a major embarrassment for Erdogan and Davutoglu. Ankara is also trying to gauge the significance of Washington’s decision to get militarily involved against this group in Iraq and Syria.

The decision by the United States and a host of European countries — and even Iran, as revealed by Iraqi Kurdistan President Massoud Barzani — to arm the Kurdish peshmerga against IS remains a sensitive topic for Turkish security officials as well.

Kurdistan Workers Party (PKK) fighters have joined the war against IS, and many fear that Western arms will also reach them. Another concern is that the PKK, which remains the prime enemy of the Turkish military, will find a new niche for itself and gain a degree of international legitimacy.

There is little Turkey can do, however, given the international sense of urgency with regard to IS. The only way forward appears to be to speed up the government’s “Kurdish opening,” which also entails talks with the PKK, and to arrive at a peace settlement with the group the Turkish military has been fighting since the mid-1990s.

A further challenge for Ankara involves Erdogan’s nemesis, Syrian President Bashar al-Assad, who is headed for a victory over the Free Syrian Army and who may also be another new ally for the West against IS. The debate over this possibility intensified after the chairman of the US Joint Chiefs of Staff, Gen. Martin Dempsey, declared Aug. 21 that the fight against IS had to be carried to Syria.

Meanwhile, the Independent cited an unnamed source on Aug. 22 as claiming that the United States has already passed on intelligence about IS leaders to the Assad regime through the German intelligence service.

Not surprisingly, the Assad regime has offered its cooperation against IS. The United States and other Western countries are trying to dispel the idea that they would accept it, but officials in Ankara see a trend that could make it possible, unthinkable though it appears to some now.

High on the list of Iraq and Syria-related challenges for Ankara, however, is a growing refugee problem that is increasing social tensions in Turkey and leading to a rise in anti-Arab sentiment.

Besides an estimated 1.5 million Syrian refugees, Turkey faces a flood of Yazidi refugees from Iraq. Many believe this will force Turkey to work out a more coherent refugee policy in cooperation with the UN and other international agencies.

But Ankara cannot avoid the fact that Sisi is accepted as an interlocutor by the United States, Europe and Russia and has the backing of most of the regimes in the Middle East.

Given Egypt’s key regional position, continuing estrangement from it will handicap Ankara as it tries to break its regional isolation. Turkey will also have to accept the antipathy for the Muslim Brotherhood and Hamas on the part of regional governments and act as a moderating influence over these groups while continuing to support their right to be part of the political process.

Turkey will also have to find ways to cooperate with Iran to overcome the sectarian divide that is flourishing in the Middle East. It will therefore have to review policies that are perceived regionally and internationally as overbearingly pro-Sunni.

In addition to all of this, Ankara has to develop unequivocal policies against Islamic terrorism based on cooperation with countries that face a growing terror threat. Finally, Turkey will have to find a way to reclaim its status as a democratic role model for the region while the social dynamics that fueled the Arab Spring remain in place.

All of this is a tall order for Ankara, and it's unclear whether the “Erdogan-Davutoglu administration,” if one can call it that, has the ability or even the will to meet the challenge. It may continue, as many predict it will, to prefer rhetoric over action. This, however, will do little to end Ankara’s regional isolation and to meet the growing list of challenges and threats Turkey is facing.