Turkish Prime Minister Recep Tayyip Erdogan and the Justice and Development Party are engrossed in the transition to a presidential system, but unrelenting developments in the Middle East will leave Ankara facing major regional problems. 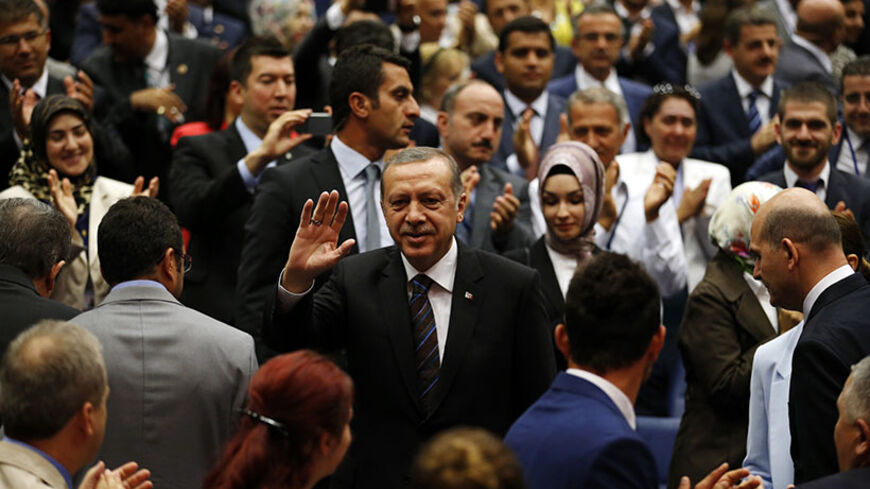 Turkey's Prime Minister Recep Tayyip Erdogan urges his ruling Justice and Development Party to work for a stronger parliamentary majority next year to enable it to rewrite the constitution, Aug. 14, 2014. - REUTERS/Umit Bektas

Having won the presidential election, Turkish Prime Minister Recep Tayyip Erdogan and his Justice and Development Party (AKP) were engrossed in the transition to a presidential system imbued with executive powers. They have major hurdles to overcome before this can happen, starting with finding an individual to replace Erdogan as the AKP head without causing a debilitating power struggle in the party.

There is also a pressing need to prepare for the next general elections, planned for 2015, which will be crucial for the AKP. The party must emerge from the elections stronger than today, so it can amend the constitution and establish the presidential system Erdogan wants.

Given the timetable and the hurdles to overcome, the “Erdogan administration” will have little time in the coming months to focus on regional developments in a proactive manner.

The situation in the Middle East, however, especially in Iraq and Syria, continues to unfold with an unrelenting momentum. This has forced Ankara into reactive mode, revealing Turkey's limited scope when it comes to altering the course of events that threaten its security and economic and social stability.

Complicating the situation for Ankara is that it hardly has any meaningful dialogue opportunities left with key regional powers to provide the basis for coordinated actions against common threats. Turkey is either in a rival camp of these powers today, or in a situation of open animosity.

It is at odds with Iran over Syria, where the two countries are involved by proxy, just as it is at odds with Saudi Arabia and other Gulf states over Egypt, regarding Erdogan’s support for the Muslim Brotherhood and Hamas.

It has been at odds with the government of outgoing Iraqi Prime Minister Nouri al-Maliki, and it remains to be seen if Ankara can mend relations with Baghdad now that Maliki has bowed out in favor of Haider al-Abadi. Abadi, a Shiite, may also not be enamored with Ankara’s overt leanings toward Iraqi Sunnis and dealings with the Iraqi Kurds.

Qatar is seemingly the only real friend Turkey has left in a region where it was once expected to play an important role as an impartial mediator, to use its soft power to help stabilize the Middle East. Following the Arab Spring, Turkey was expected to provide a democratic example to the region’s nascent democracies.

Yet the Turkey we have today is a far cry from that Turkey. The Middle East also became a totally different place, contrary to Ankara's expectations, becoming instead a major source of insecurity.

Today, the Islamic State (IS) — which some claim Ankara supported either directly or indirectly against Syrian President Bashar al-Assad — is trying to establish itself along Turkey’s borders with Iraq and Syria. The group is not only threatening Ankara at the Ataturk Dam and the Euphrates, but also continues to hold hostage 49 Turkish citizens, including Turkey’s consul general, after it raided the Turkish Consulate in Mosul in June.

Turkey’s failure to secure the release of its citizens, after two months of their being held hostage, is turning into a stark reminder of its loss of influence in the region. The government insists that negotiations are underway for the hostages, but the public remains skeptical, unaware of whom Ankara is holding talks with, given the official media blackout on the subject.

Prospects for the hostages appear even worse since the United States has started bombing IS targets. There is also talk of Washington and London arming the Iraqi Kurds against IS. Turkey does not know how to position itself in view of these developments. Meanwhile, even as its problems with Syrian refugees grow, it is trying to cope with a new influx of refugees, this time the Yazidi Kurds fleeing the Islamic State.

But the IS headache is only one of the unsavory developments in the region that Erdogan and his new administration will have to confront after they devise more realistic regional policies. Other developments include Egyptian President Abdel Fattah al-Sisi, who, along with Assad, has become Erdogan’s regional “bête noire,” increasingly gaining international legitimacy, even though he toppled Egypt’s democratically elected president — and Erdogan’s close friend — Mohammed Morsi in a military coup.

Assad is on track to become an important factor in regional stability as he consolidates his position in Syria with ongoing help from Iran and Russia. He remains a hated a figure in the West and the Sunni world, and, of course, for Erdogan.

But the stability he provides in the parts of Syria under his control could turn out to be important, even for the West, as the situation in other parts of Syria and Iraq slides into chaos due to IS. As a corollary, Turkey might find itself stuck with the estimated 1.5 million Syrian refugees it has taken in.

The presence of the Syrian refugees is leading to increased social problems in Turkey, resulting in the kind of ugly scene witnessed these past few days in Gaziantep, in southeastern Anatolia, which were highlighted by Rasim Ozan Kutahyali in his post on the subject for Al-Monitor.

Ankara is also concerned about the implications of Washington and London arming Iraqi Kurds, especially now that the peshmerga are moving toward cooperaton with the Kurdistan Workers Party (PKK) against IS. Despite the AKP government’s ongoing peace talks with the PKK, the group remains the enemy of the Turkish military and Turkish nationalists.

In brief, “President Erdogan” and his administration will have much to cope with once they lift their heads from the domestic agenda and face up to events in a Middle East that has defied all their previous expectations. The longer it takes them to fashion realistic policies that match the situation on the ground, the more difficult it will be for Turkey to cope with newly emerging threats from the region.