Can Turkey set up buffer zone inside Syria?

The idea of a buffer zone on the Syrian side of the border has been revived again, but faces serious feasibility questions. 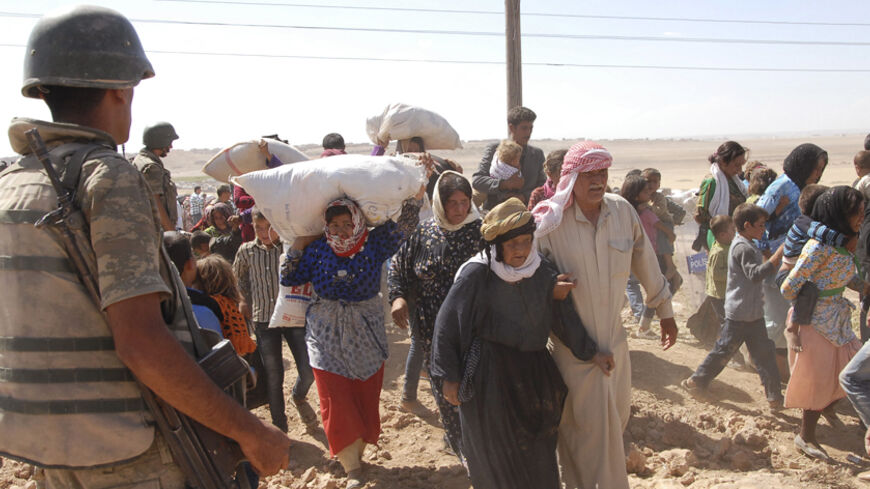 A Turkish soldier stands guard while Syrian Kurds cross the border fence into Turkey near the southeastern town of Suruc, in Sanliurfa province, Sept. 19, 2014. - REUTERS

President Recep Tayyip Erdogan is livid over what he says is a coordinated media campaign in the West to discredit Turkey and show it as the weak link in the US-led efforts to combat the Islamic State (IS).

Ankara is nevertheless concerned over the perception that Turkey is not only reluctant to join the fight against IS, but is aiding the group, if not directly, by at least turning a blind eye to its logistical and financial activities on Turkish territory.

Meanwhile, IS — which is holding hostage Turkey’s Mosul consul general and 48 consulate staff and family members — continues to pose serious problems for Ankara. The recent advances reportedly secured by the group in northern Syria are resulting in a fresh wave of refugees piling up on the Turkish border.

All of these developments are forcing the government to consider new options for addressing the IS problem, which continues to fester in a number of ways for Ankara. Erdogan convened a high-level security summit in Ankara earlier this week on developments related to IS and to discuss possible solutions.

The summit was held before his departure for New York on Sept. 22 for the annual UN General Assembly, where the growing international threat from IS and possible measures against it will also be discussed.

One of the ideas reportedly taken up during the summit in Ankara, which was attended by Prime Minister Ahmet Davutoglu, relevant government ministers, the head of the Turkish intelligence agency MIT and the chief of the general staff, concerned the setting up of a buffer zone on the Syrian side of the border.

According to news reports, such a zone would not only aim to prevent the movement of IS fighters in and out of Turkey, but would also provide a safe haven for refugees. The idea to establish such a zone is not new, of course, and was first floated during the early phases of the Syrian civil war.

It never took off, however, because of legal, military and financial constraints, including a lack of commitment by the international community to contribute to its financing, protection and maintenance. It's unclear that these obstacles have been overcome today, which leaves many questions on how serious Ankara is on this topic.

Erdogan revealed earlier this week that the Turkish military was working on the modalities of this option. “They are dealing with the technical aspect. They will determine if it is necessary and, if it is, where it will be set up and how deep it will be, after which they will bring the matter to us and we will decide on it,” Erdogan told reporters on his plane on Sept. 15 while he was traveling back to Turkey from an official visit to Qatar.

First, Turkey is reluctant to set up such a zone on a unilateral basis or even with support from a small group of nations. Ankara expects this buffer zone to have UN Security Council approval. In other words, Turkey wants the cover of international legitimacy for the buffer zone to allay regional criticism.

Sources indicate that the idea of a no-fly zone over the buffer zone on the ground is also being considered. Iran, which remains closely allied to Syrian President Bashar al-Assad, however, is not expected to look favorably on a buffer zone and a no-fly zone over it. But if Ankara could secure UN Security Council approval for such a zone it would have a valid argument against possible criticism from Tehran, or any party opposed to it.

Media reports on the topic indicate that Erdogan will try to get that approval while in New York. This, though, appears difficult, if not impossible, given that the Assad regime, against which the idea of such a buffer was put forward initially, is bound to oppose it and have Russia’s support.

There are other factors that have to be considered as well. Ankara wants to show that the main idea behind such a buffer zone is humanitarian and defensive in essence. The zone, however, would have to be protected militarily. Turkey clearly wants a multilateral effort in this regard but it is not clear if it can get significant support from the international community.

The problem is aggravated by Turkey’s border with Syria being almost 900 kilometers (560 miles) long, and establishing a buffer along the full length of this border would be an almost impossible task without massive military and financial input from the international community.

There is also the fact that the government will have to get parliamentary approval in Turkey to establish such a zone. While the ruling Justice and Development Party (AKP) currently has the necessary numbers in parliament, Erdogan and Davutoglu know that the matter will add fuel to the already fiery domestic political squabbling between the government and the opposition on a host of topics.

Given this difficult backdrop, the possibility that such a buffer zone will not be established far outweighs the possibility that it will. Erdogan’s critics argue that the actual reason why the government is floating this idea again is to counter the impression that Turkey is a reluctant ally against IS.

They say that while Ankara does not want to participate in any military coalition against IS, it wants to show that it is prepared to assist the coalition in other ways that are also highly significant. Ankara also expects to get US support in this, and many expect it will.

But, as already indicated, Turkey wants international legitimacy based on UN approval to go ahead with such a project beyond its borders. The support of key allies alone will not be enough. The support it gets from Washington and other Western allies will nevertheless enable it to buy time against critics in the West who say Turkey is not doing enough against IS.

But this will prove to be only palliative in the long run, because IS will clearly not be disappearing any time soon, and the problems it continues to pose for Turkey are likely to increase and force Ankara into taking concrete action rather than merely floating ideas aimed at mollifying critics.