Ankara is finding it increasingly difficult to define its position in the fight between its NATO allies and the Islamic State. 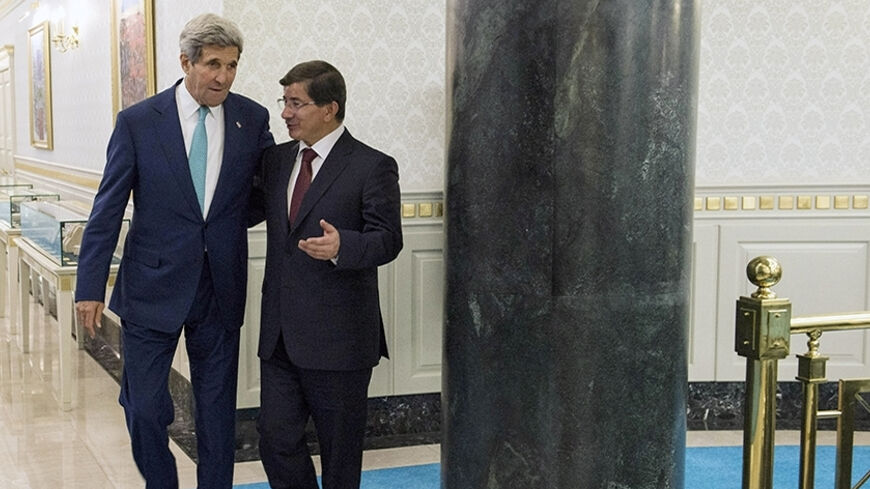 Turkey is gradually moving from a reluctant NATO ally toward an embarrassing or embarrassed partner in the fight against the Islamic State (IS, also known as ISIS). As The Daily Beast reported, “With [IS] on its doorstep, the Turkish government balks at support for Obama’s strategy.

"A diplomatic crisis looms. Turkey, a key US ally and the only NATO member that borders areas controlled by [IS] jihadists in Syria and Iraq, is in a prime location to hit the extremists next door. But it prefers not to.

“Instead, Ankara is seeking a low-profile role — so low as to be almost invisible — in the international alliance that Washington is building up against the so-called caliphate, and that fact is undermining the American strategy to strike back against the terrorists President Barack Obama deems ‘unique in their brutality.’”

Turkey's stance in the joint struggle against IS is indeed low-profile, but perhaps this is an understatement. If the recent discourse of its decision-makers is scrutinized closely, one may reach the conclusion that the ruling Islamist government of Turkey is more distanced from its NATO allies than from IS.

The 49 Turkish hostages taken by IS when it stormed the Turkish Consulate in Mosul, including the consul general, serves as a good excuse not only for Turkey’s reluctance to take part in joint action against IS, but also as a cover for the inherently and increasingly anti-Western Turkish government not to follow the lead of the “new crusaders” in their actions in the Muslim lands, targeting mainly Sunnis. It is not easy to substantiate such an argument, yet it deserves to be considered.

It is not by chance that some keen observers and political personalities reacted along these lines when Turkey refrained from signing the Jeddah Declaration on Sept. 11 along with Kerry and 10 Arab countries. Turkey’s foreign minister was the only official present who did not sign the document.

Parliamentarian Aysel Tugluk, the former co-chair of the pro-Kurdish party in Turkey, tweeted, ”Turkey did not sign the [IS] communiqué because [IS] is the name of the proxy force fielded by Sunni actors led by Turkey.”

Actually, it was already clear in an article in Yeni Safak, a publication known to be very close to the government, before Obama explained his new IS strategy that the AKP government would not contribute substantially to Obama’s strategy and saw it as a trap. The news report, headlined “Turkey will not be trapped” and attributed to government sources, bluntly stated that Turkey would not take any operational role against IS.

The most critical passage of this report read, “Prime Minister Davutoglu, who gathered top commanders of the Turkish Armed Forces at his office a day before, yesterday held a security summit with larger participation. … The topic was the IS operations and the status of 49 Turkish hostages.

“The meeting did not consider favorably the 'core coalition' issue that foresees Turkey’s support for a ground operation against IS but emphasized the complications that have arisen in Iraq and Syria. That IS was an outcome of the [Syrian President Bashar al-] Assad regime was heavily underlined in the meeting, which adopted the policy of a passive role in the coalition. The summit decided that at this phase, Turkey could not participate in any military operation. It was stressed that active support by Ankara for the operation could risk the lives of the hostages.”

Even more interesting, Ibrahim Karagul, the editor-in-chief of Yeni Safak and a Davutoglu disciple, penned a column, “ISIS Trap to Turkey,” in which he crafted an outlandish conspiracy theory and claimed that the real target of the new anti-IS joint action is actually Turkey. His argument is significant and interesting in that it more or less reflects the mindset of Turkey’s decision-makers. He wrote, “There is a plot being hatched, but all its elements are in the open. Turkey is aware of the plot and no matter what others say it will follow its own course. They did not take note of any of Turkey’s warnings about the key issues of the region. Now with the pretext of IS, they are trying to throw Turkey into the fire.

“The mentality that punished Sunnis during the invasion of Iraq and in the status quo that evolved is the key creator of the [IS] issue today. Even more bizarre, the countries that are preparing for a new operation don’t have any projects for the future of Sunnis.

“We are truly fed up with paying the costs of the destruction these countries have caused in our region, and of their mistakes.

“To take action for US and European interests and priorities, to play a central role in that operation and to send soldiers are issues that Turkey has to assess carefully and avoid. Let them go and solve their own problems. Before [IS] there was the Syrian issue. They did nothing there. They didn’t keep any of their promises.

“The [IS] problem cannot be solved before the Syria problem is solved. Shouldn’t they know at least this much? Their problem is not [IS] but Turkey. … Everyone knows this now.”

It is not surprising that Turkey did not sign the Jeddah communique, while the Arab nations vowed to “do their share” to confront and ultimately destroy IS. Their promise came after the nations’ foreign ministers met in Saudi Arabia behind closed doors with Kerry.

The New York Times reported on the dramatic development, “Turkey also took part in the meetings here, but it did not sign the communique. A senior State Department official sought to minimize the significance of that development, saying the United States would continue to consult with Turkish officials on how to respond to the threat posed by [IS], which has captured 49 Turkish diplomats in Iraq and held them hostage. 'We understand the challenging situation Turkey is in given their detained diplomats, and they will make the decision on what role they can play moving forward,' the official said.”

On the day Kerry reached Ankara, The New York Times reported an unnamed Turkish official’s statement. “Speaking on the condition of anonymity to discuss internal deliberations, an official advised not to expect public support for the American effort.”

An Agence France-Presse dispatch from Ankara confirmed, “Turkey will refuse to allow a US-led coalition to attack jihadists in neighboring Iraq and Syria from its air bases, nor will it take part in combat operations against militants.”

The two main Turkish dailies, Hurriyet and Milliyet, came out with similar headlines on the day Kerry came to Ankara. Hurriyet’s was “Difficult guest” while Milliyet's read “Ankara draws the line.” Milliyet wrote that Turkey’s contribution to Obama’s plan to destroy IS will have a "humanitarian focus," meaning Turkey will not participate any armed action against IS and will not assist those taking part in such an activity.

In his strategy speech, Obama said that “America will be joined by a broad coalition of partners." Kerry added during his joint statement with the Saudi foreign minister, “We believe we will beat back the evil” of IS. Kerry also asserted that the international coalition against IS was growing.

Turkey is the only NATO country bordering IS' areas of control. But when it comes to the fight against it, a reluctant ally is gradually transforming itself into an embarrassing partner for the Western nations and an embarrassed regional actor in front of IS.

We have yet to see how such Turkey's stance will bear on Obama’s strategy and how it might affect its success. Nonetheless, this start does not bode well for the coming fight.