The Sozcu daily, a relative newcomer in the Turkish press, has climbed to the top of the circulation ladder, taking on board senior journalists dumped from other papers for criticizing the government. 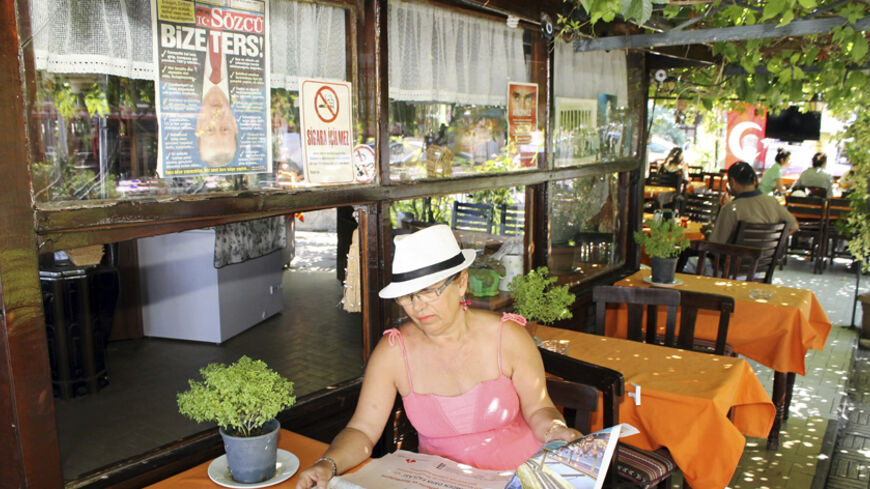 A woman reads a newspaper at a cafe, with an opposition newspaper displaying an upside-down picture of Turkish Prime Minister Recep Tayyip Erdogan on the window, in Cesme, western Turkey, July 14, 2014. - REUTERS/Denizhan Guzel

Over the past several years, the top columnists of Turkey’s Hurriyet daily, long recognized as the "flagship" of the Turkish press, have been sacrificed to government pressure. Two of those heavyweights — Emin Colasan and Bekir Coskun — have been recruited by Sozcu, a relative newcomer in the Turkish media, and will soon be joined by Yilmaz Ozdil, Hurriyet’s latest fallen star.

These seasoned columnists did not limit their government-bashing to Recep Tayyip Erdogan’s Justice and Development Party (AKP), but as the AKP grew stronger, its tolerance for criticism thinned. Moving to re-design the media, the government unleashed tax inspectors on Aydin Dogan, Hurriyet’s boss, subduing him with gigantic fines. Unlike a few other bosses, Dogan did not whine and beg for mercy. But after each election Erdogan won, he sacrificed a couple of columnists, forcing them to resign, either through censorship or “compulsory vacations.”

Colasan, whose name was once synonymous with Hurriyet, was the first casualty, followed by a long list of prominent figures. Along with Colasan and Coskun, Sozcu’s lineup today boasts renowned journalists Ugur Dundar and Soner Yalcin, while Hurriyet’s former editor-in-chief Rahmi Turan is its chief columnist.

The highly popular Ozdil — long believed to be someone Hurriyet could not afford to sacrifice — resigned last month after his article was censored. “Five thousand people are working [at Hurriyet]. I would loath to see any of them suffer because of me. I quit and gave the boss relief,” he said. “Both the Turkish media and the Turkish people should stand by the Dogan family, which, through its newspapers and TV channels, is in the service of the nation. [If they are forced out of the media] Turkey can never fill the vacuum.”

Faced with reader outrage, Hurriyet released a statement, saying Ozdil’s last article breached the paper’s professional ethics norms, but instead of modifying his piece, the columnist chose to not publish it.

The unpublished article — a sarcastic take on who should succeed Erdogan following his election as president — quickly hit the Internet and went viral. It contained barbed references to the December corruption probe that targeted Erdogan’s government and family, including leaked wiretaps in which Erdogan allegedly instructed his son Bilal to “zero out” — or remove — large sums of cash from their home in Istanbul.

Here is an excerpt from the article: “My candidate [for prime minister] is Bilal. First of all, state continuity is essential, and a true state passes from father to son. Second, I remember how, at the 2005 NATO summit in Brussels, his father was chatting with US President [George W.] Bush and British Prime Minister [Tony] Blair when Bush pointed to Bilal and asked whether he was working and his father asserted he was. ‘Very smart boy,’ replied Bush, who a moment earlier knew nothing about him. ‘Just like his father,’ a smiling Blair added. Bush and Blair were right, he is a very smart boy indeed. In his younger years, he had no money to go to school and studied on [businessman] Remzi Gur’s scholarship. Then, by working hard, he earned so much that today he could spend 48 hours zeroing out money and still have 30 million euros with nowhere to put it. Just think how smart he is.”

Ozdil is not likely to be the last casualty — Hurriyet still has a number of writers who irritate the government. But they are far outnumbered by former colleagues who have joined Sozcu.

In an interview with Al-Monitor, Colasan was still bitter about his former newspaper. “I was fired in 2007, and I knew more would be coming. It was not a surprise because media outlets like Hurriyet, which are fearful of the government, are either seized by the government or their writers become government supporters,” he said.

“Both Hurriyet’s boss and editorial staff are under government pressure. Under the AKP, they were slammed with tax fines of about $2 billion, which were totally unfair. The purpose was to bully, intimidate and subdue them. The government succeeded because no brave soul in Turkey is willing to pay such sums,” Colasan said. “Now, all Hurriyet writers think five times before criticizing the government. I know how it is. … They would censor and trim your articles without even telling you. I’ve been through all this. I refused to resign and finally got myself fired.”

Colasan doubted Sozcu could take over Hurriyet’s “flagship” title despite its soaring circulation, which sometimes surpasses Hurriyet’s. “To me, the ‘flagship’ is today a boat escorting the AKP government. But it is still the deep-rooted Hurriyet. It continues to function … but thanks to its old reputation and respectability.”

Nowhere else to go

Coskun, Hurriyet’s other heavyweight casualty, believes that columnists gravitate to Sozcu because “they have nowhere else to go.”

Coskun, who has a loyal readership “addicted” to his sharp wit and satire, told Al-Monitor, “There are lots of media outlets and papers in Turkey, but they are all captives of the government. He [Erdogan] had his cronies directly buy some of them. And we all know what happened to the others — he threatened the bosses openly from his rallies, he told them to ‘put the columnists in their place.’ All critical writers have been fired. Sozcu is the only place to go.”

Coskun is bitter that Hurriyet still enjoys high circulation. “A newspaper that has fired the largest number of critical writers remains Turkey’s largest-selling paper. Sadly, most people remain unaware of what is happening to Turkey today. Their favorite columnists get fired, but they continue to buy those papers,” he lamented.

Asked about his departure from Hurriyet, Coskun recounted a familiar story: “Just like in Ozdil’s case, they refused to publish a couple of my articles. Then Aydin Dogan had a talk with me, saying he was under government pressure. Ozdil said he quit to give the boss relief. I said the same five years ago. We cleared off to give the boss relief.”

Founded in 2007 by the son of a veteran journalist, Sozcu is currently the AKP’s harshest critic. In the past three years, it has retained a place among the three top-selling papers in terms of copies sold individually on a daily basis.

Sozcu managed to boost its circulation by embracing top Hurriyet outcasts at a time when public hunger for critical media was growing. True to its name — “spokesman” in Turkish — it has become the voice of a mass of people who believe they are being gagged. Starting out with a printing of 60,000 copies, its circulation reached 200,000 by 2013 and shot up above 350,000 after the Gezi Park protests last year. The daily is now Hurriyet’s main rival in terms of copies sold individually on a daily basis. The two papers’ daily sales fluctuate between 360,000 and 410,000. It will be curious to see whether Ozdil, expected to debut in Sozcu this month, will tip the scale.