Despite a strong anti-Kurdish discourse, Kurds in Turkey are finding it easier to come out of the political and cultural closet. 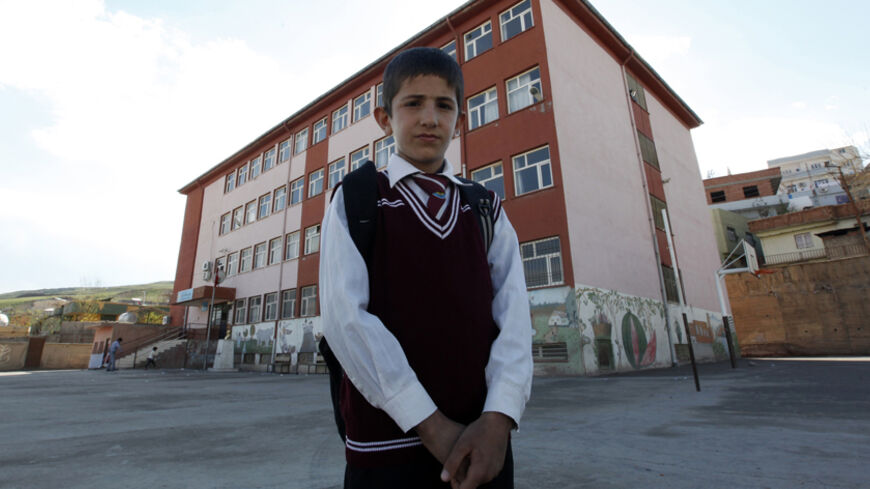 Kurdish schoolboy Ferhat Savun, 11, poses in front of his school in the town of Cizre in Sirnak province, near the border with Syria, March 24, 2013. - REUTERS/Umit Bektas

On Sept. 15, the school year started in Turkey. Yet, most schools in northern Kurdistan (southeastern Turkey) were without students. Several Kurdish nongovernmental organizations and two major Kurdish political parties supported a weeklong boycott to stand up for the right to education in Kurdish in all subjects. So far, the Turkish government has only allowed the Kurdish language to be offered as an elective in schools and has resisted all other Kurdish demands. In several cities in the southeast, Kurds have established private schools to provide education in Kurdish for the coming school year. However, since Sept. 15, the police have been shutting down these private schools.

Kurdish is a sensitive issue in Turkey. Throughout my childhood, I believed Kurdish was a language that was only "whispered." My best friend’s parents were from Diyarbakir — a city in the southeast with a majority of the population being Kurdish. Whenever I visited her house, I would hear Kurdish spoken by the adults, but they were always whispering. When I asked, “Why do they whisper? We don't understand it anyway,” my friend Zeynep — who to this day does not speak a word of Kurdish — told me, “They don't whisper to prevent us from hearing them. It is just a soft-spoken language. You don't speak Kurdish loudly.” At the age of 8, we were young enough to believe Kurdish was a language that was whispered. Almost three decades later, following the Kurdish Initiative — a reform package introduced in 2009 that intended to expand the political and cultural rights of Kurds in Turkey — and the peace process with the Kurdish Workers Party (PKK), is Kurdish still a language of whispers in Turkey?

Alternatively, we can ask what it means to be a Kurd in contemporary Turkey.

For decades, not only the Kurdish language but also the Kurdish identity was denied in Turkey. For example, Turkish cinema and sitcoms portrayed Kurdish characters in marginal roles; their Turkish accents were mocked and their customs belittled. Only in the last decade, we have witnessed the portrayal of Kurdish figures as main characters with real life issues on the screen in Turkey.

Explicit anti-Kurdish discourse still lingers today. For example, the word “kiro” is the most uttered word to sneer at Kurds. Some argue it originates from the Kurdish word “kuro,” which means “my son.” The word in Turkish now connotes a derogatory meaning for a rude, uncultured and uneducated male.

The Kurdish population in Turkey ranges from 9-13 million, which is 12-17% of the total population. Since the 1990s, forced immigration from the southeast has brought millions of Kurds to western cities such as Istanbul, Ankara and Izmir, which contributed to the evolution of the Kurdish image over time. A 2014 Bogazici University study shows that among multiple groups — classified as pious, secular, Turk, Kurd — Kurds feel the most alienated. Those who identified themselves as Kurdish expressed the highest level of feeling discriminated against — whether at the police station or in an upscale store — compared to non-Kurds in Turkey.

Veli Bayrak, a prominent Kurdish writer and journalist, told Al-Monitor, “I grew up in a suburb of Ankara where there is a sizable Kurdish population, so I did not feel strongly discriminated against in my neighborhood. However, for the same reason our community was the target of harsher police tactics. While growing up in the 1980s and 1990s, I witnessed people being arrested because they owned Kurdish music recordings or papers in Kurdish.” It is an open secret that many Kurdish parents in mixed neighborhoods advise their children not to reveal they are Kurdish. “However, it is difficult to hide you are Kurdish,” Bayrak said. “If nothing else, the Turkish identity card shows where your family is from. You have to use the ID card in all official settings, so how can you hide you are Kurdish, especially from the authorities? Every now and then, you are reminded that you are a Kurd in Turkey.”

Sadly, Bayrak was not alone in his observations. Hatice Altinisik, the People's Democracy Party (HDP) deputy chairwoman responsible for “people and their beliefs,” told Al-Monitor, “Times have changed. I grew up when my mother used to tell us, ‘Do not tell everyone you are from Tunceli [a city in the east with a high-density Kurdish population].’ Now we can openly say we are Kurdish.”

Al-Monitor has spoken to more than 200 mostly middle-aged, middle-class Kurds since June 2014, and all agreed that it is now much easier to say that one is Kurdish than it was a decade ago. Kurds who live in major cities among Turks in mixed neighborhoods no longer try to hide their Kurdish identity. Altinisik explained that this change was due to the strength of the Kurdish rights movement. She told Al-Monitor, “We owe this change to the gradual yet constant struggle of Kurds to achieve a place for themselves in society, not just in Kurdistan but in western [Turkish] cities as well. I think the Kurds have changed — we gained confidence in our own identity, our own voice.”

Sultan Ozcan, one of the founding members of the HDP, shared her experience of starting elementary school. Ozcan told Al-Monitor, “My mother tongue is Kurdish, I started school not knowing a word of Turkish. At school, the teacher told us, ‘Never ever speak in Kurdish, I will listen outside your homes at night to make sure.’ I was 6 years old, and I was convinced the teacher would come to our home. I was mute. I tried very hard to speak Turkish without an accent so that no one could detect I was Kurdish. I would read books out loud night after night to make sure I was fluent. Finally in junior high, I was Turkified.” Ozcan also agreed that in the last decade, society has changed and she can say she is Kurdish without fear and feeling intimidated.

The struggle to erase the Kurdish identity from Turkey was also reflected in Kurdish cuisine and music. Many Kurds know traditional Kurdish songs only with Turkish lyrics. The performance and recording of Kurdish songs was banned from 1982 until 1991, but a lucrative black market of Kurdish music survived nevertheless. Kurdish music is known for its epic tales, inherent in traditional storytelling. Some of the most famous singers in Turkey are indeed Kurdish.

Similarly, a rich and diverse cuisine from the southeast of Turkey has now spread across Turkish cities. That said, the debate about whether kebab and lahmacun (a kind of pizza) is Kurdish remains unresolved.

There are quite a few Kurdish politicians and high-level bureaucrats in the Justice and Development Party’s (AKP) ranks. Their experiences show that it is easier to be accepted into Turkish society when one reaches a certain financial status. As one Kurdish bureaucrat told Al-Monitor, “The question of discrimination is no longer about being Kurdish, but being poor and destitute.”

It is fair to say in the last decade Kurdish identity has become more visible and accepted in Turkey, and the peace process has helped erase the Kurdish “terrorist” image. Yet, discrimination against Kurds, especially toward those from lower socio-economic sections of society, persists.

Kurdish as a language has evolved from being whispered behind closed doors to being sung loudly, written on street signs and spoken on TV freely. Despite all assimilation efforts, Kurds have not forgotten their language, demanding it becomes a language of instruction in schools.