Western intelligence officials have reportedly reached out to the Syrian government on potential cooperation over the Islamic State threat, but so far little progress has been made. 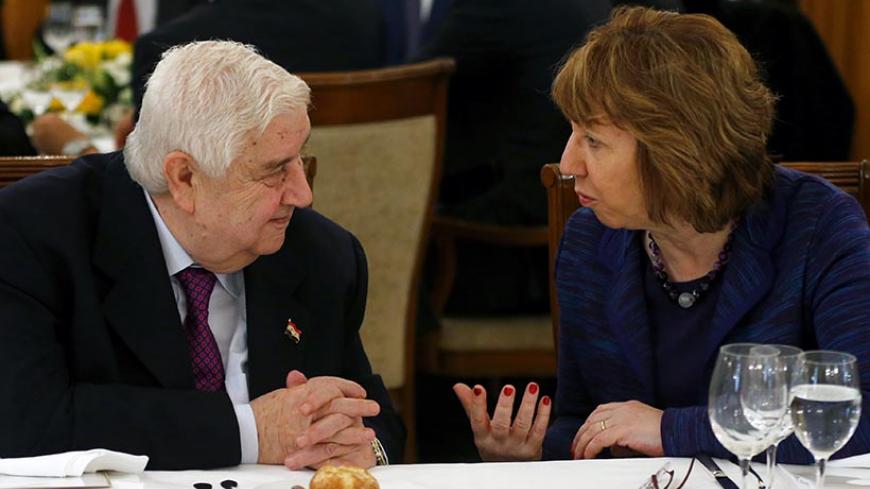 The Syrian government is seeking to present itself as the West’s only option to confront the Islamic State (IS) in Syria. After the terror group’s gains in Iraq and eastern Syria — edging out both its jihadist rival Jabhat al-Nusra from Deir ez-Zor and the last regime bastion in Raqqa — IS is making its move in Aleppo’s countryside, pushing closer to the country’s second largest city as it strikes rebel-held territory.

But despite the shocking loss of the Tabaqa military air base in Raqqa and IS' execution of dozens of captured Syrian soldiers, the Syrian regime is still prioritizing its fight with Jabhat al-Nusra and rebel factions.

The United States has lately assumed a more bellicose position toward IS, following the radicals’ stunning advances in Iraq, capturing its second-largest city, Mosul, before threatening the Iraqi Kurdistan capital of Erbil. President Barack Obama has signaled his intention to expand US operations against IS from Iraq to Syria, raising interest in Damascus for potential cooperation and a renewal of legitimacy for the Syrian regime.

That interest was made clear by Syrian Foreign Minister Walid Moallem on Aug. 26, when he called for international cooperation with the Syrian authorities to fight IS and Jabhat al-Nusra.

But cooperation between the West and the Syrian government remains elusive, as Western powers are reluctant to openly work with a regime they have chastised over the past three years for its conduct in a civil war that has claimed the lives of over 190,000 people.

According to the Lebanese source, Italy reached out to Syrian officials this summer about potential counterterrorism cooperation. Italian intelligence officials met with the head of Syria’s intelligence, Ali Mamluk, in Damascus, but were rebuffed by the Syrian government after Italy refused Syria’s request for open cooperation, including the reactivation of the Italian Embassy in Damascus and reinstating the Italian ambassador.

Italy is particularly eager for cooperation, he said, owing to its concern over Syrian asylum seekers crossing the Mediterranean Sea to Italian shores, and the potential national security threat should terrorists seep through.

A Syrian source who attended the Geneva II talks earlier this year told Al-Monitor on condition of anonymity that Western officials have privately expressed interest in cooperating with the Syrian military to confront IS, but are reluctant to deal with Syrian President Bashar al-Assad, who many Western states have repeatedly insisted should step down from power.

“It’s a matter of finding the right formula to enable such cooperation,” said the Syrian source.

The right formula for the Syrian government is to ensure there are no competitors on the ground for US cooperation. While the focus was on IS’ capture of the Tabaqa military base in Raqqa, Syrian government forces have been concentrating their efforts on taking the key rebel stronghold of Jobar near Damascus. Heavy clashes there have been ongoing for days. The capture of Jobar would be a significant gain for the regime, effectively securing Damascus and reducing the sporadic rebel mortar shelling on the city, largely emanating from Jobar.

But IS’ gains have not gone unnoticed by regime supporters, many of whom were outraged at the defeat at Tabaqa and are demanding action and accountability for the loss. The Lebanese source, nevertheless, dismissed concern among regime supporters that the government might be playing with fire with IS. “On a map, it appears that IS has a lot of territory. But in reality, it does not control any key urban centers in Syria. The core of Syria still remains with the government. All they have is desert,” he said.

This core area marks a red line for the Syrian government, the source explained. “Over the past two years, the government has made gains to establish a corridor between Damascus and the coast, capturing the major central cities and securing the Lebanese border. The government will not give up what it has gained.”

The Lebanese source said the Syrian government is confident IS will not be able to take major urban centers, saying, “IS’ strategy is to publicize its brutality and scare the next several villages in its path to flee. But the Syrian army will not flee.”

But it’s a two-way street, according to Atassi, who believes the United States has equally little chance of defeating IS without active Syrian military involvement.

“The Syrian army is the best equipped [to fight IS], from intelligence services to topography to geo-mapping to understanding its bases. Its participation is really crucial and one of the critical pillars of defeating IS,” he said. “If the United States and its allies want to do it separately, that mission doesn’t have the same chances of success as building a coalition that includes the Syrian army. One without the other won’t work.”

Such a partnership, however, requires that the Syrian government give some political ground to enable US cooperation.

“I wish the Syrian regime would think outside of the box, and figure out a way to give some carrots to the United States,” Atassi added.

One carrot could involve forming a unity government with members of Syria’s opposition, but there seems to be little traction on this matter in Damascus, while the United States continues to insist that any change in the Syrian government should include the departure of Assad. With neither side showing signs of compromising on a political solution to the Syrian crisis, the effective partnership needed to defeat IS will not come to fruition, to the benefit of the radical group.

“This is the only chance where all the axes are converging and having an intersection point,” Atassi said.