Is Syrian army US' best option against IS?

Too many uncertainties about "moderate" Syrian rebels make them the least effective option for confronting the Islamic State, leaving the Syrian regime the only realistic alternative. 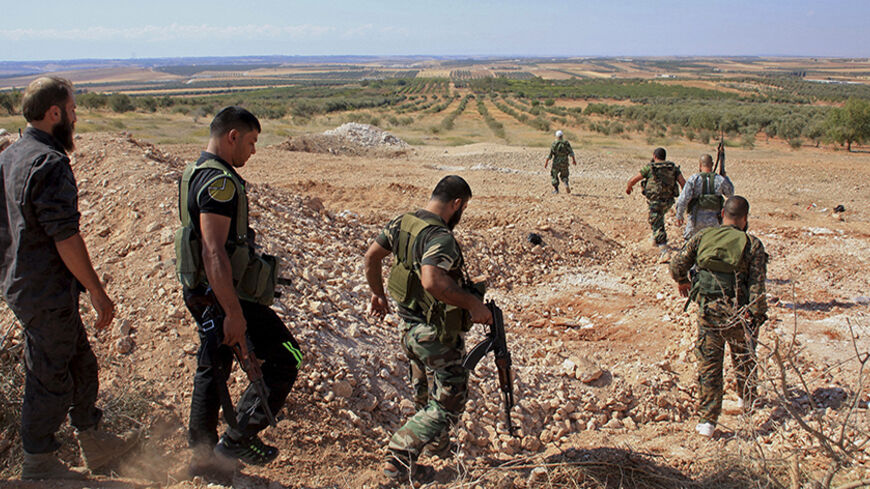 Forces loyal to Syria's President Bashar al-Assad carry their weapons as they walk in the town of Halfaya in Hama countryside, after claiming to have regained control of the area, Sept. 12, 2014. - REUTERS/George Ourfalian
Edward Dark
@@edwardedark
September 18, 2014

As the US military campaign ramps up in Iraq against the Islamic State (IS), many important questions remain unanswered in regard to the operation's imminent counterpart in Syria. It seems clear that US policy in Syria will involve some sort of force on the ground to complement the airstrikes targeting IS positions, heavy weaponry and troops. The Americans have guessed correctly that IS cannot be defeated unless taken out in Syria as well, and airstrikes alone are not enough to do that.

IS has already withdrawn from prominent buildings it took as headquarters in towns and cities such as Raqqa, instead adopting a lower profile and hiding among the locals and abandoning heavy armor for more mobility and stealth via lighter cars and vehicles. The million-dollar question is: Who will take on the role of the peshmerga and the Iraqi army in Syria?

Certainly not the Bashar al-Assad regime, as the US administration has ruled that out entirely. In fact, none of Damascus' powerful backers will be taking part in the anti-IS coalition, something that many observers think is a major mistake and undermines any effort to defeat the powerful and well-entrenched group.

The Islamist rebels are also out of the question, as the majority of them are hostile toward the West and unlikely to welcome any foreign military action in Syria unless it directly targets the regime. Even the jihadist factions locked in a bitter and bloody interfactional war with IS are unhappy at what they view as overt Western aggression, fearing they might be next. The Kurdish militias are unlikely to be considered either, because the Turks are apprehensive about arming groups linked to their own long-running conflict with the Kurdistan Workers Party.

That leaves the golden goose, the one that is not laying any eggs: the so-called moderate rebels of Syria. Throughout the Syrian conflict, that designation of “moderate” has been mostly blurred, at times referring to specific groups or groupings such as the Supreme Military Council or the loosely defined umbrella term “Free Syrian Army,” but in all cases the moniker has been taken to mean “not Islamists.”

The failure of these groups to make substantial gains against the regime or the jihadists despite a large investment in arms, funds and training begs the question of what has now changed? If they were unreliable then, what makes them a viable option now? Not only were some of them merely unreliable, but they also openly collaborated and allied with al-Qaeda-linked groups such as Jabhat al-Nusra, or through sheer incompetence and corruption allowed Western-supplied weapons and equipment to fall into the hands of extremists.

Indeed, the stigma of corruption and ineptitude permeates most of the Syrian rebel factions designated as “moderates,” and some have even been involved outright in serious war crimes. This makes them not only an unreliable ally on the ground, but also a potentially very dangerous one.

There is a fluidity between these groups and the hard-line Islamist factions. When disillusion grows among their ranks, many of their fighters gravitate toward the better disciplined, better motivated and more successful ones, invariably covering the full range of the Islamist spectrum, from moderate to Salafist to full-on psychopathic. The fighters left behind are usually not the better ones. They are motivated more by the prospect of looting than fighting, likely to flee or abandon their positions at the first sign of trouble.

The United States thinks it has solved this paradox, if rather partially and vaguely, by setting up training camps for various vetted rebel fighters in willing regional states such as Saudi Arabia. The numbers will be modest at first, around 5,000, but with time might be ramped up to a full-blown army, provided the men and resources can be found. Both are plentiful, it seems, but it would also appear that previous attempts, covert ones at that, at raising and training moderate rebel armies in Jordan and Qatar were not effective. Besides, any such venture would require too much time, and time is something the US-led coalition does not have if it is serious about stopping IS now and preventing it from plunging the broader Middle East into calamity and turmoil.

So what choices are the anti-IS allies left with? Well, none it seems, especially now, as their last best hope, Jamal Maarouf of the Syrian Revolutionary Front, was reported to have struck a non-aggression pact with IS. If true, it would be a major embarrassment for the Barack Obama administration as it tries to convince the world that backing “moderate” Syrian rebels is the right approach. The alleged deal may also point to the fear among Syrian rebels of a brutal backlash, coming on the heels of the spectacular bombing on Sept. 9 that obliterated Ahrar al-Sham’s top leadership and effectively destroyed the powerful Salafist militant group. Many believe IS was behind the brazen and sophisticated attack, which sent shudders through the entire anti-regime camp and suggested that the Islamic State’s reach and dominance goes much further than any of them had thought.

If the allies’ last best hope on the ground is petrified of taking on IS, then their strategy seems most certainly doomed to failure. This is not surprising, considering that a powerful NATO member (Turkey) and other staunch regional allies (such as Jordan) are extremely reluctant to get involved in any military action against IS for fear of blowback.

The only alternative then appears to be an unpalatable and unholy alliance with the Syrian regime, the only force on the ground right now capable of taking on and defeating IS with any degree of success. To that effect, the regime’s army has been relentlessly pounding IS positions in the east of the country for more than a month with heavy airstrikes and barrel bombs, showcasing its terrorist-fighting credentials to its would-be suitors. The fact that the regime itself, among a few other regional players, was partially responsible for the rise and growth of the group appears to be a mere afterthought now, as a healthy dose of pragmatism and a shared sense of threat kicks in and forces bitter enemies together, or at least that is what Damascus is counting on.