Who’s afraid of a handshake?

With President Hassan Rouhani in New York for UN General Assembly, the issue of a possible handshake between Rouhani and the US president is a prime concern in Iranian media. 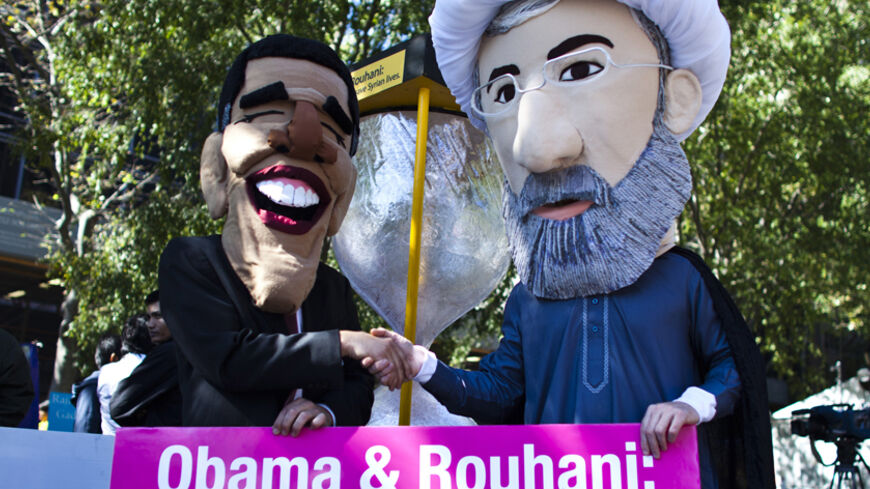 As Iranian President Hassan Rouhani left Tehran for New York yesterday, Sept. 22, for the 69th UN General Assembly, various conservatives held conferences and published op-eds warning the president about the nuclear negotiations to take place on the sidelines of the assembly and against a possible handshake with the US president. Supporters of the president have also voiced their opinions via open letters and Twitter.

Tehran University professor Sadegh Zibakalam wrote in a Sept. 21 open letter to Rouhani, “You have not yet set foot on the plane and extremists have pre-emptively started beating the anti-American drums on the matter of you meeting with the American President Barack Obama and [saying] that you do not have permission to do so.”

The letter continued, “Mr. President, at a time when the 5 million people of Scotland freely decide their fate, is it too much to expect for our people to express their opinions about the foreign policy of their country on the issue of anti-Americanism?

“Does the elections mean anything other than people being asked of they are in favor of the continuation of the old policies or not? And have the people, with 19 million votes for you and 4 million votes for Dr. Saeed Jalili, not expressed themselves on the previous policies, such as anti-Americanism?” Conservative candidate Jalili’s policies during the 2013 presidential election most resembled those of former President Mahmoud Ahmadinejad.

“Mr. President, know that a significant fraction of the people are fed up with the continuation of the anti-Americanism policies, which are aimless and devastating to national interests. Know that a significant fraction of the 19 million that voted for you wanted to end this useless enmity with America. Any effort on your behalf to decrease the conflict with American and the West will be welcomed by the people of Iran, and this is one of the prime demands of your voters.”

The conservative “Committee to Protect Iran’s Interests,” which describes itself as a “people’s and student group,” wrote an open letter to members of parliament about the possibility of Rouhani meeting with Obama.

The letter read that instead of announcing the end of nuclear negotiations, which have been “useless,” Rouhani gave interviews to NBC in which he said the enmity with the United States would not last forever. “Apparently, the more insults and humiliation and demands and sanctions are increased, the eagerness of some officials to establish friendship with the Great Satan is increased,” the letter read.

The letter stated that Supreme Leader Ayatollah Ali Khamenei had only given permission for direct meetings with the United States at the level of the Foreign Ministry, and only because of the insistence of the administration, and questioned why certain media outlets would push for higher level meetings. While Rouhani said of the possible meeting that “anything is possible,” he should expect an “appropriate response” from parliament, read the letter.

Conservatives, many of them former Ahmadinejad allies, held a conference yesterday, Sept. 22, called, “The path and the well: the do’s and don’ts of the New York trip, warnings on the insistence of inappropriate acts.”

At the conference, Obama’s name was mentioned numerous times. Conservative parliament member Hamid Rasaei said, “I have no doubt that Rouhani will not meet Obama.” He said the direct meetings between Foreign Minister Mohamamd Javad Zarif and Secretary of State John Kerry have only resulted in the Americans growing “sharper in tone.” Rasaeei said that while Ahmadinejad’s letters to Obama were a mistake, at least he made requests of Obama, while Rouhani addressing the US president in a respectful tone is also a mistake.

Parliamentarian Mohammad Hassan Asghari said that since Obama and Rouhani spoke on the phone at the last assembly, breaking a silence that lasted since the 1979 revolution, Iran has seen no benefits but rather new issues, such as new sanctions designations.