Why is Abbas playing hardball with Hamas?

Palestinian President Mahmoud Abbas has taken a tough stance toward Hamas since the Gaza war ended, in part in an effort to appease Egypt and some of the Gulf states vehemently opposed to the Muslim Brotherhood. 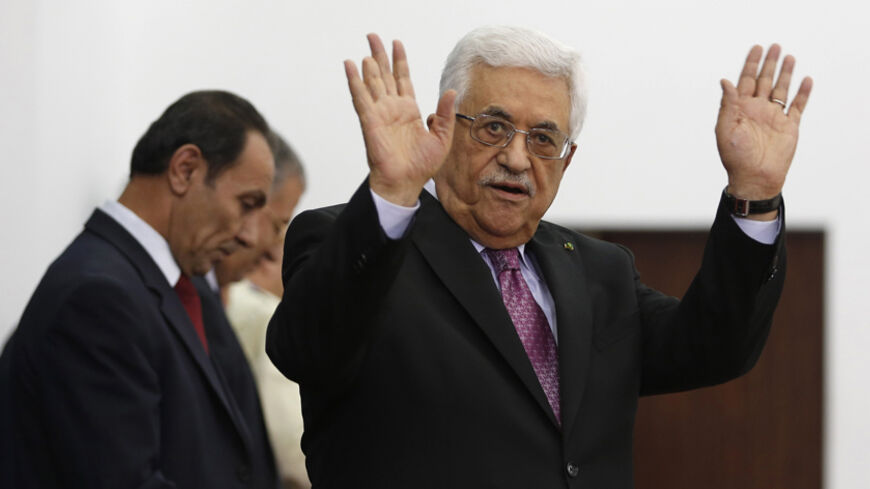 Palestinian President Mahmoud Abbas waves during a swearing-in ceremony of the unity government, in the West Bank city of Ramallah, June 2, 2014. - REUTERS/Mohamad Torokman

On paper it looks like Palestinian President Mahmoud Abbas and his counterparts in Hamas need each other. Abbas will be unable to carry out Gaza's reconstruction or even talk convincingly to the world about the future of Palestine without the acquiescence of the Islamists. On the other hand, Hamas cannot get a hammer or nail into Gaza or pay the 40,000 workers it has employed without the approval of the Palestinian president. If both sides so badly need each other, why is the Palestinian leader playing hardball with Hamas?

According to leaked transcripts, Abbas was extremely tough with Hamas leader Khaled Meshaal during a private meeting with the Qatari emir, Sheikh Tamim bin Hamad Al Thani, during the last days of the recent war with Israel. Abbas’ anger with Hamas was also made public after the cease-fire agreement in interviews he gave to a Palestinian television station.

The Palestinian president has paid little attention to Gaza issues in the last few weeks, focusing instead on European and UN visits to promote his peace plan, which calls for the international community to demarcate the borders of Palestine and for a three-year transition to total independence.

Abbas’ displeasure with Hamas had been apparent in a meeting he held in Ramallah Sept. 17 with a group of some 30 businesspeople from Gaza. In the two-hour meeting, during which, attendees said, Abbas appeared unhappy, he insisted that all building materials will enter Gaza under the supervision of UN representative Robert Serry, a sign that he accepts this Israeli condition. Abbas’ tough position stems from his mistrust of Hamas and concern about potentially angering moderate Sunni states. His stance is unlikely to change even after the signing of an agreement Sept. 25 in Cairo that allows the Palestinian unity government to operate in Gaza but fails to strip Hamas militants of security control.

In the meeting with the Gazans, one businessman is reported to have told Abbas that Hamas has changed. Abbas responded by asking the businessman his age. The man replied, 52, to which Abbas shot back, “I’ve known them for 55 years,” a reference to Abbas’ knowledge of the Muslim Brotherhood, some of whose leaders were among Fatah’s early members.

Abbas often reminds people that Hamas had wanted to kill him and that the movement is still plotting in the West Bank to overthrow the Ramallah-based government. Hamas denies both accusations. Al-Monitor has learned from sources in the president's circle that Abbas has refused repeated requests by Palestinians to go to Gaza, insisting to his close aides that he will only go after Hamas relinquishes total control of the territory.

A more strategic reason for Abbas playing hardball with Hamas involves Palestinian-Arab relations. Giving any credit to Hamas, viewed as a branch of the Muslim Brotherhood, is bound to weaken Abbas’ relations with Egypt, Saudi Arabia and the United Arab Emirates, which these days have zero tolerance for the Brotherhood. For regional strategic and financial reasons, Abbas is loath to make moves that would give the Islamic movement credit or legitimacy. He does not accept Hamas’ claim that it was victorious in the recent war, in which more than 2,000 Palestinians, many of them children, were killed.

The situation in which Hamas ran what Abbas called a shadow government in Gaza, does not sit well with the 79-year-old Palestinian leader. He needs to be sure that the unity government that Hamas agreed to in April is indeed allowed to work not only administratively, but also has the power to maintain law and order. The latter might prove to be the biggest obstacle to the Sept. 25 agreement.

Abbas’ tactic is evident. He sees that Hamas needs him more than he needs it, and he has therefore pounced on this weakness. The Palestinian leader is hoping to be able to reverse Hamas’ 2007 coup, which led to the violent exit of the security forces loyal to him. He has set the bar quite high for any type of cooperation with Hamas on Gaza. Giving Hamas a power-sharing role at present would appear to be a reward to Meshaal and company, a position that Abbas is not willing to take knowing full well that it would cost him in terms of regional allies and financial support.

An international donor conference to support Gaza reconstruction is scheduled for Oct. 12 in Cairo. Abbas wants to be sure that he can go to the conference with Hamas weakened and having accepted his demands that Gaza and the West Bank have one government, one ruler and one security force.