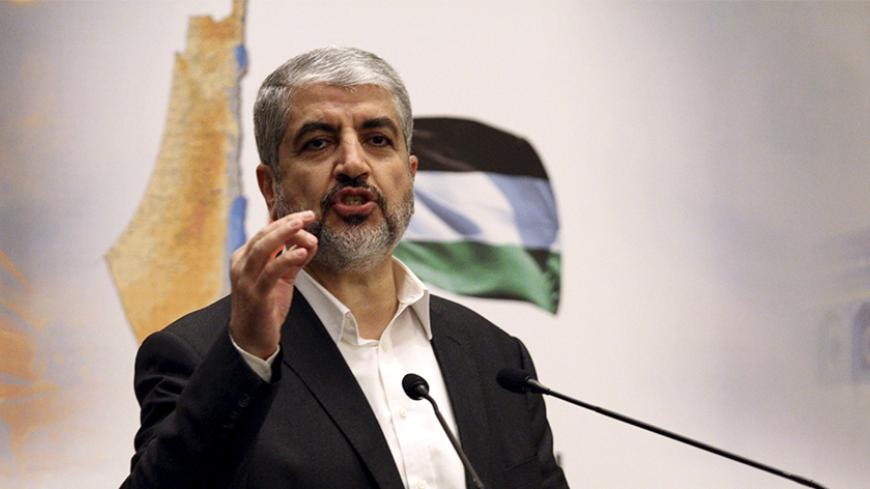 Hamas leader Khaled Meshaal this week called for Palestinians to end the Israeli settlement and occupation by forming a united field command to ensure the success of the intifada in the West Bank and Jerusalem.

In his first official appearance since Sept. 7, the head of Hamas’ political bureau participated in a Nov. 4 Skype interview organized by the Press House in Gaza — a nongovernmental organization — with a couple of Palestinian authors and media, including Al-Monitor. He outlined factors that he said had deluded Israel into thinking the time was right to divide Al-Aqsa Mosque between Muslims and Jews.

Those factors include the Palestinian division, weak choices made by the Palestinian Authority (PA), the region’s preoccupation with heated issues and the US’ withdrawal from the Palestinian issue to focus on other international events. But the intifada took Israel by surprise and revealed its miscalculations.

In the two-hour interview, Meshaal focused mostly on Palestinian national unity. He refused to endorse any action that could weaken or foil the intifada. He said he hopes the intifada’s momentum will achieve what the Fatah-Hamas reconciliation failed to in terms of national field unity.

There are four main Palestinian responsibilities during the intifada, he said: foiling attempts to divide Al-Aqsa Mosque, sustaining the political will to achieve national goals, agreeing on a joint strategy to pressure Israel and forming a field command to create political opportunities and invest in them. He also called for the temporary leadership framework of the PLO to convene.

A new aspect to Meshaal’s stance was his recognition of the PA’s international action as a good step. Those actions include Palestine joining the International Criminal Court in March in preparation for filing legal cases against Israel and raising the Palestinian flag at the UN in September.

Nevertheless, he said these steps, although important, are not enough to confront Israel’s politics. He called for establishing a Palestinian strategy that combines resistance fieldwork with politics, diplomacy, and regional and international action.

“The 2000 Al-Aqsa intifada liberated Gaza, thanks to the Israeli retreat from it in 2005. The current intifada should aim at liberating Jerusalem and the West Bank completely,” he added.

But Meshaal launched ideas that are unprecedented in the speeches of Hamas leaders. He said, “Just like Hamas cannot single-handedly take the decision of waging a war against Israel, other parties cannot take political decisions alone.” He called for halting security coordination between the PA and Israel.

Meshaal was asked many questions about Gaza’s suffering. He outlined the city’s six main problems: the blockade, reconstruction, reopening the Rafah crossing, government employees’ salaries, the port and airport, and infrastructure renovation.

He noted that Hamas did not refuse to hand over the Rafah crossing management to the PA, and he welcomed the Palestinian Presidential Guards’ control of the crossings without dismissing the employees appointed by Hamas’ former government. He proposed forming a committee that would assign the crossing’s team on a partnership basis. He told Palestinian President Mahmoud Abbas that Hamas wants reconciliation on a partnership basis, rather than a dismissal and substitution basis.

Al-Monitor asked Meshaal about Gaza’s participation in the intifada — a question that has been on the minds of Palestinians in the past few weeks.

He said Hamas is against another war in Gaza.

“We should not burden Gaza with resistance action similar to that in the West Bank and Jerusalem. Gaza is still suffering from the scars of the 2014 war with Israel. It still hasn’t recovered," he said. "The past wars were forced on it by Israel, but this does not exonerate Gaza from its national responsibility of resistance and political participation in the intifada.”

Meshaal took advantage of the interview to focus on the popular dimension of the intifada. This was a new point he tackled, amid the Palestinian debate that flared up in October about militarization of the intifada. Meshaal said, “Hamas believes in all of the resistance’s choices and in the importance of coordinating efforts under a united command to increase the intifada’s efforts.”

Regarding the expected prisoner exchange agreement between Hamas and Israel, Meshaal asserted there is nothing new on the issue of the detained Israeli soldiers Hamas captured during the 2014 Gaza war. The movement’s policy is clear, and it will not offer Israel any free information about its soldiers. It will not launch negotiations until Israel again releases the detainees who were let go in a 2011 swap deal, only to be arrested again in June 2014.

Meshaal sent out more messages of unity to Palestinians, saying, “Hamas is concerned with [securing] the release of Fatah leader Marwan al-Barghouti and secretary-general of the Popular Front for the Liberation of Palestine Ahmad Saadet from the Israeli prisons as part of any future swap deal with Israel.”

Meshaal also mentioned Hamas’ diplomatic action in the past few weeks. He revealed that Hamas had several dialogues, without specifying any dates, with several regional and international states, including Qatar, Turkey, Switzerland and Norway, and with figures like former British Prime Minister Tony Blair and former and current UN Middle East Peace envoys Robert Serry and Nickolay Mladenov, among others. The talks were aimed at helping to resolve Gaza’s problems without secluding it from the West Bank, as Hamas refuses to establish a state in Gaza.

Meshaal added that Hamas is taking international and regional action and will not cooperate with the Quartet Principles. He revealed European invitations for Hamas to visit London and Geneva. Hamas is open to the whole world, he said, and the world is becoming open to Hamas and to cooperating with it. Moreover, Hamas is receiving many official and unofficial delegations, some of which are confidential.

Regionally, Meshaal noted he has called several Egyptian leaders, without specifying whom. He said the discussions are ongoing despite some problems, like closing the Rafah crossing and digging a water canal along Gaza’s borders.

He said Hamas has maintained its relations with Iran and is seeking to win over all parties. He described Hamas’ visit to South Africa in October as fruitful and noted that the movement is not seeking relations with countries at the expense of the PA. Hamas is not introducing itself as opposition to the other countries, but insisting that relations with it do not substitute for relations with any other Palestinian party.