The unity shown by the Palestinian people on the ground in their uprising against Israeli practices can be reflected on the political scene; but will Fatah and Hamas take this opportunity to end the division? 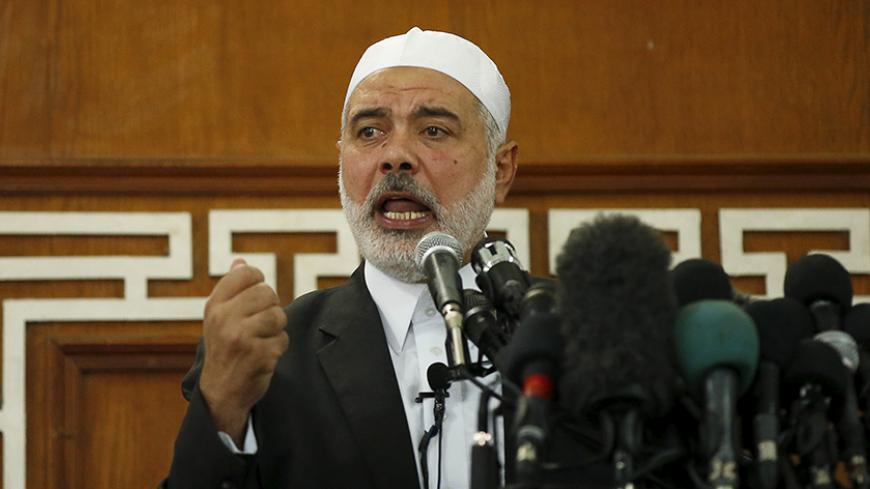 Hamas leader in Gaza Ismail Haniyeh delivers a sermon during Friday prayers in Gaza City, calling on Palestinians to step up their fight against Israel, Oct. 9, 2015. - REUTERS/Mohammed Salem

GAZA CITY, Gaza Strip — With the start of every war or confrontation with Israel, Palestinians rush to say that blood unites them. However, facts during previous wars and the internal Palestinian division prove otherwise. Media accusations between the Hamas and Fatah movements, which further deepen the division, prevail in such circumstances. But will the situation be different this time around, with the current Jerusalem intifada?

Fatah spokesman Fayez Abu Atiyeh said that recovering unity in light of the current conditions is a national urgency, and failing to achieve unity will benefit Israel, not the Palestinians and their just cause.

Abu Atiyeh told Al-Monitor that the Palestinians have united on the field, with the Gaza Strip joining the West Bank and Jerusalem in the confrontations to defend Al-Aqsa Mosque. He said, “The Gaza Strip is part of the Palestinian territories, along with the West Bank and Jerusalem. This is the message that our people seek to send through the popular intifada. This is why the factions ought to stand by the Palestinian people that are collectively defending our dignity, by achieving unity and reconciliation agreements.”

Abu Atiyeh believes the current intifada is an opportunity to achieve unity, and that the violations of holy sites and the killings of children on the Palestinian streets should be an incentive to achieve this unity.

He said, “This is a major opportunity, and we ought to take it. President Mahmoud Abbas decided during a meeting held Sept. 1 for the Palestinian Liberation Organization’s [PLO] Executive Committee to form a delegation that would meet with the Hamas movement to discuss mechanisms to reach a reconciliation agreement and achieve national unity. We hope that Hamas responds to these efforts, and positively deals with the delegation to be able to reach a reconciliation agreement and end the division, especially under these circumstances.”

For his part, Hamas leader Ahmed Yousef told Al-Monitor about the messages he received from the Palestinian Authority (PA) and some of the PLO’s factions, asking the movement to sit and solve the standing problems and end the division. He said, “These messages came as a result of the Jerusalem intifada, which awakened the Palestinian and Islamic conscience. For this intifada to succeed and have the most effect, we should meet and not remain divided in order not to let down the youth movement. Hamas, for its part, welcomed these demands.”

Yousef believes his movement offered all that was required from it to end the Palestinian division, in reference to Hamas agreeing on forming the Palestinian unity government. The ball is now in Abbas’ court, as he now has all the cards and powers as president, according to Yousef.

He pointed to Hamas’ readiness to sit with the PLO delegation that Abbas talked about forming and sending to the Gaza Strip, to discuss all the contentious issues, including forming a national unity government, holding presidential and legislative elections and making changes in the PLO, as well as stopping the Judaization of Al-Aqsa Mosque and confronting these efforts.

The Jerusalem intifada, which started Oct. 1, has unveiled the truth behind the Palestinian division. Hassan Abdo, a political analyst, told Al-Monitor that the street and confrontations led to recovering the unified resistance activities against the occupation, even if political division remains between Fatah and Hamas.

Abdo said that what is currently happening on the ground is a major event that is far more important than previous intifadas. The current intifada will have important repercussions on the Palestinian future, as it created a space for all national components to work together while bringing them closer, which would allow overcoming the division in the future, according to Abdo.

He added, “This environment will push all parties to work for the end of a division, although these efforts have not matured yet. But we are on the right path, since the moral and human action by the Palestinian people and the popular intifada to eliminate the legitimacy of the occupation and settlements will eventually end the division completely."

Building upon the environment and conditions created by the popular Jerusalem intifada will move the popular unity witnessed on the ground to the internally divided political system; however, this depends on the steps that the poles of the Palestinian division — Fatah and Hamas — will take in this regard.