Hamas holds little faith in the newly established consensus government, accusing President Mahmoud Abbas of putting aside the needs of the people of Gaza. 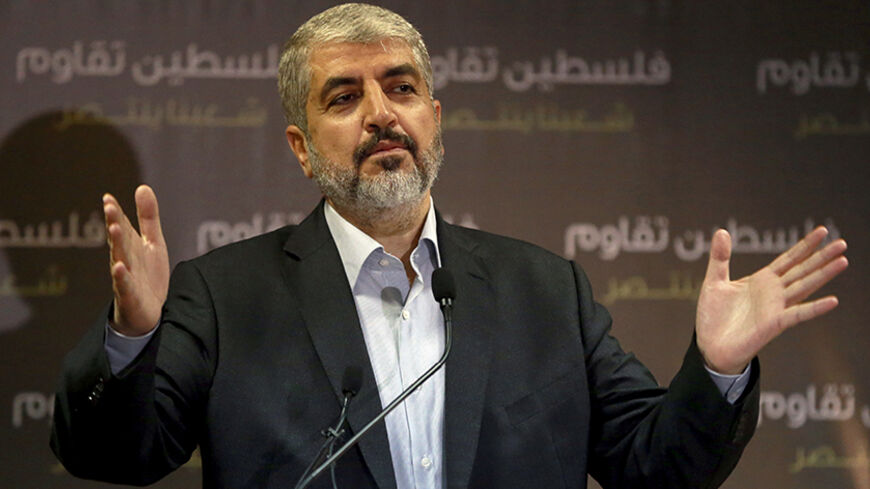 The Palestinian dialogue comes amid tensions between Fatah and Hamas that escalated immediately after the end of the Israeli war on Gaza Aug. 26, due to disputes regarding the reconstruction of Gaza and the unpaid wages of former government employees.

Speaking at a celebration organized by the International Union of Muslim Scholars on Sept. 21, before the Cairo talks, Khaled Meshaal, Hamas' political bureau chief, said: “As soon as the Gaza war ended, the attack against Hamas started. This aims at stirring a hostile media campaign. Hamas has no time to waste on secondary battles. We have priorities, most important of which is the issue concerning the reconstruction of Gaza. We will not tolerate negligence in any issue and we will not accept the cancelation of any part stipulated in the reconciliation.”

When Meshaal spoke of a campaign against Hamas, he was referring to information leaked from a two-hour meeting on Sept. 17 at the presidential headquarters in Ramallah, held among President Mahmoud Abbas and 30 prominent figures from the private sector from Gaza, and covered by local media outlets.

Al-Monitor met with a number of those who participated in the meeting with Abbas. One of the sources said, “The meeting was unfruitful and frustrating, because the president expressed his lack of interest in the disaster suffered by Gaza after the war. We understood from his speech that reconciliation would be in jeopardy if Hamas does not hand over Gaza to the consensus government. He advised the participants not to trust Hamas’ statements since he has dealt with it for several decades. The participants understood that reconciliation is not on Abbas’ list of priorities.”

A Hamas official told Al-Monitor, “The movement was notified of what was discussed at the meeting between Abbas and the prominent figures. This is contradictory to Abbas’ position as president representing all Palestinians, particularly ahead of the Cairo dialogues. This prompted Hamas to be fully prepared for the possibility of the breakup of the consensus government, since it is Abbas’ government and not a government for all Palestinians.”

Amin Maqboul, secretary-general of Fatah's Revolutionary Council, said on Sept. 23 that the primary talking point in the Cairo talks will be the empowerment of the consensus government to assume its role and extend its authority in the Gaza Strip. However, Maqboul indicated that a quick settlement of the wages of former Hamas government employees is unlikely since the Palestinian Authority cannot pay the relevant salaries for different political, administrative and financial reasons, accusing Hamas of misinterpreting the reconciliation agreement.

Furthermore, a Fatah leader explained to Al-Monitor that Hamas is financially capable of settling its employees’ salaries in Gaza until the end of the year, since it received financial aid from foreign sources — which it did not mention — after the end of the war. The source said, “This makes Hamas reluctant to hand over power in Gaza to the consensus government. This is a real impediment to the Cairo negotiations taking place. As money flows to Hamas from abroad, the countdown for the collapse of reconciliation will start.”

Al-Monitor reported this statement to a senior Hamas official abroad, who said: “The movement will not be able to stand idle while the employees in the Gaza Strip are not receiving their salaries for several months. Hamas was able to manage its affairs by settling half of the employees’ salaries. The movement has alternatives to prevent the situation of Gaza’s people and employees from reaching unacceptable levels.”

This is consistent with the statement made by Mahmoud al-Zahar, a member of the political leadership of Hamas, during a political meeting in Gaza on Sept. 18, attended by Al-Monitor. Zahar described the consensus government as a failure, since it has not made achievements on the ground. “If the government is unable to achieve its objectives during the next six months, Hamas will have to find alternatives,” he said.

A prominent independent figure told Al-Monitor that Hamas had recently been communicating with a number of political forces and high-level officials to discuss the Palestinian situation in Gaza. He said, “This is in anticipation of a potential setback in reconciliation and for fear of going back to the years of division witnessed by the Palestinian territories since 2007. It is unlikely that Hamas hands over control in the Gaza Strip as a sign of goodwill.”

Moreover, Gaza’s former Deputy Prime Minister Ziad al-Zaza launched an unprecedented attack against the consensus government on Sept. 17 during a television interview. He called on the government to resign unless it fulfills its duty to the people of Gaza and provides all possible support. “If it cannot fulfill its duty, it must resign and we will form another government. This government has reinforced the Palestinian division and created a new division,” he asserted.

Hamas sources told Al-Monitor that Hamas is holding intensive consultations with Palestinian circles to lift Gaza from the situation of apathy and the lack of responsibility by Abbas. Hamas is considering scenarios including initiating the formation of an alternative unity government.

The sources indicated that this can be added to other unspecified options, that Hamas does not favor, but which are under discussion within the movement’s leadership to save Gaza and its people.