Palestinian President Mahmoud Abbas has seen a boost in recent opinion polls as events turn his way, including Sweden’s recognition of Palestine, the Gaza donor conference and the progress of the national unity government. 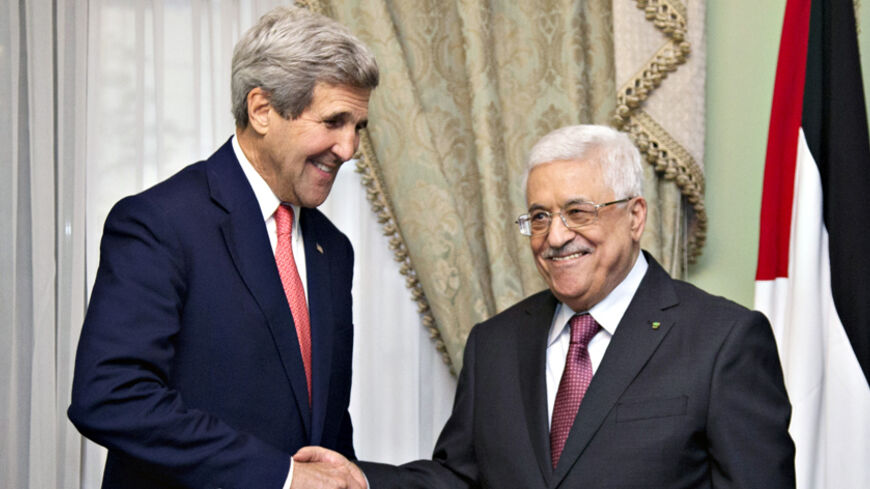 US Secretary of State John Kerry shakes hands with Palestinian President Mahmoud Abbas at Andalus Villa in Cairo, Oct. 12, 2014, on the sidelines of the Gaza Donor Conference. - REUTERS/Carolyn Kaster

For a moment at the end of the summer, it appeared that Palestinian President Mahmoud Abbas was defeated. The Gaza war, which he was unable to do much about, badly hurt his reputation. The transcripts of the three-way meeting with the emir of Qatar and Hamas political bureau chief Khaled Meshaal had made him look bitter and his UN speech sounded like a last hurrah. Public opinion polls suggested for the first time that he would lose an election with a Hamas leader and his public standing had dipped to its lowest point. His own government seemed unclear on how to approach the Gaza reconstruction efforts.

Then, early in October, all seemed to go his way.

Sweden recognized Palestine, which was followed by an overwhelming 274-12 vote in the British House of Commons in favor of recognition. The Gaza reconstruction funding drive yielded more pledges ($5.4 billion) than requested ($4 billion), and his unity government held a full Cabinet meeting in Gaza with security guards brought in from Ramallah. All of a sudden, Abbas’ standing had greatly improved. A new poll showed that his approval rating more than doubled. In the poll, Gazan support for Abbas was much higher than for Hamas. He now is reportedly planning to visit the besieged Gaza Strip. Hamas and Meshaal have lost a lot of public support and are facing many other problems just to stay afloat.

What happened in this short period?

There is an Arabic saying that people start thinking when the effects of drinking disappear. Time and the Palestinian public seeing that the Gaza war was not the major victory Hamas had claimed was a reality check for the Palestinian public, which realized that the path of Hamas does not lead anywhere near the end of occupation and Palestinian statehood.

The same has happened internationally. Abbas’ own speeches, in which he stressed his age, worried the world community that the two-state solution will disappear once the 79-year-old leader leaves the political equation.

Regionally, the developments in Iraq and Syria also cemented the fact that to defeat radical Islam, moderates like Abbas must be embraced and supported. If the Gaza war was not going to be considered a victory for the Islamic movement, the world community needed to put some substance to their rhetoric of supporting moderate secular leaders in the Middle East.

The good news coming from Abbas, however, needs to be put in its proper context. It is true that the Palestinian government met in Gaza, but it was a short ceremonial meeting and we have yet to see a major shift of power on the ground. Hamas security forces still control Gaza despite the Cabinet meeting by the new government.

The recognition by Sweden and the British Parliament are important, but they are still gestures that have yet to be translated to decisions in Brussels or Washington.

Certainly Abbas' improved standing will do little to stop the Israeli lust for Palestinian land and the radicalization of the settlement-inspired government. Actions in Silwan and at Al-Aqsa mosque don’t bode well for the public Palestinian call for an independent state on the 1967 borders with East Jerusalem as its capital.

Perhaps the most important, if still fragile, accomplishment is the move toward Palestinian unity. The daily changes in this direction are helping to reverse the dark days of June 2007 and many hope it will soon reach the point of no return. With every day of progress by the national unity government and with more non-Hamas Palestinian security forces entering Gaza, this scourge on the Palestinian political map could be left as a small dark spot in Palestinian history.

The patience and determination of Abbas surprised those who had written him off. Abbas might be approaching 80, but his tactics and strategies appear to be quite intact and are producing positive results that should soon translate to progress on the ground. After so many defeats and setbacks, Abbas may still be able to bring about real change in the Palestinian territories.