President Mahmoud Abbas’ speech in which he emphasized security coordination with Israel has seen a fierce backlash from the Palestinian street, givng Hamas a likely poll boost. 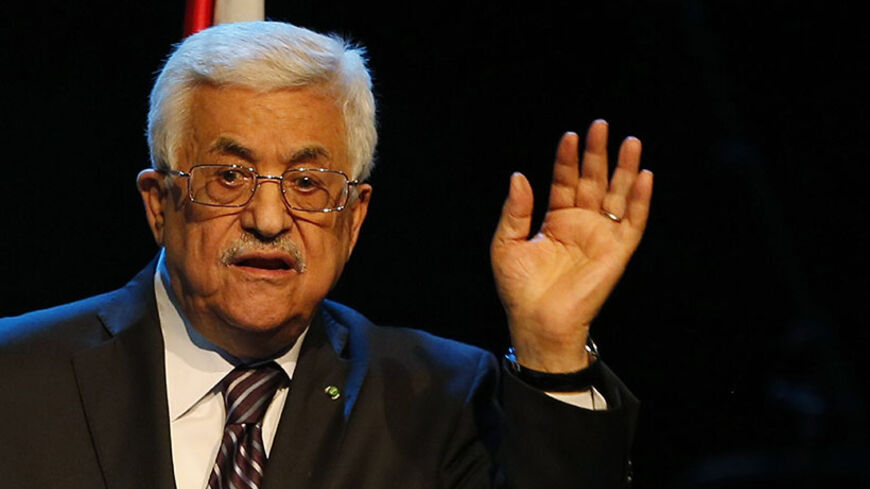 Palestinian President Mahmoud Abbas gestures as he speaks during a conference in Ramallah, June 19, 2014. - REUTERS/Mohamad Torokman

GAZA CITY, Gaza Strip — As time passes, the negative effect of President Mahmoud Abbas' June 18 speech to the foreign ministers of the Organization of Islamic Cooperation (OIC) in Jeddah is getting worse. As soon as Abbas finished his speech, social media was abuzz with shock and anger.

Social media activists promoted the hashtag “Abbas doesn’t represent me” and the video of the speech, writing angry comments. In particular, they criticized Abbas for saying, “Security coordination between us and Israel is in our interest to protect our people. … We will not restart an intifada that would destroy us. … The Israeli government is escalating a lot. The reason is that three young men were abducted from one of the settlements,” in reference to the disappearance of three teenagers June 12.

After the speech ended, anger poured onto the street. On June 23, Palestinian youths threw stones at the headquarters of the Palestinian police and smashed the windows of two police cars to protest the security coordination between the Palestinian Authority (PA) security apparatus and the Israeli occupation.

In a speech during the opening ceremony of a conference in Ramallah on June 19, Abbas said, “I wish I could find [the kidnapped teenagers] alive because we are humane, and we don’t accept the kidnapping or killing of any innocent person.”

In contrast, Hamas’ cachet rose and the hashtag “Meshaal represents me” spread after the head of the Hamas political bureau, Khaled Meshaal, said on the evening of June 23 in a news conference broadcast live by Al Jazeera: “I cannot confirm or deny the kidnapping … by any party. But in any case, blessed are the hands that kidnapped them because our prisoners should get out of the occupation’s prisons.”

Leftist and liberal social media activists took a new and decisive position with the resistance in the face of Abbas’ speech. Activist Uruba Othman wrote on her Facebook page on June 20, “Salute to those who have struck the Palestinian security services with the hysteria of searching for them for eight days!”

Leftist activist Ali Abdul Bari told Al-Monitor, “I used to think that Abbas was man with a point of view, but I discovered that he’s just a man who maintains his power, influence and money. His dictatorial style has been revealed because it is no longer hidden by any logic. His speech was madness and cannot be justified.”

Mariam Abu Amer, a young Palestinian woman, told Al-Monitor, “I believe that Abbas is a seasoned politician. He speaks this way only to the media. He knows that the occupation can destroy Ramallah. Let us remember what Hezbollah Secretary-General Hassan Nasrallah said when the occupation destroyed Lebanon in the 2006 war. If he knew that this would happen, he would not have kidnapped the soldiers.”

Hamas thinks that Abbas’ speech serves the movement’s interest. Mushir al-Masri, the Hamas deputy in the Legislative Council, told Al-Monitor, “Our rebellious Palestinian people lean toward those who adhere to the constants. Today, after Fatah fervently defended the security coordination, Hamas will win any future elections in Gaza and the West Bank. The people cannot give up their struggle and sell their rights to the Zionists. Any accurate opinion polls now will confirm this result. … The letter from Abbas was nauseating, irresponsible, unpatriotic, didn’t reflect the will of the Palestinian people and constituted a coup against the revolutionary heritage, for which thousands of [Palestinians] were imprisoned and wounded. His speech was biased toward the occupation and was an abandonment of the people. … It’s as if he was struck with Alzheimer’s.”

Islamic Jihad spokesman Daoud Shehab agreed. In an interview with Al-Monitor in his office, he explained that the president’s popularity has greatly declined. He said the reason was “the speech, which broke with national values. His saying that coordination protects the people misleads public opinion. How can coordination protect the people when seven citizens were martyred in the last 11 days?”

Shehab added that Abbas is imposing his personal vision of the Palestinian people, and that part of the Fatah movement opposes the speech and this vision because no Palestinian accepts security coordination with Israel.

Despite the ideological difference between Islamic Jihad and the Popular Front for the Liberation of Palestine, PFLP political bureau member Jamil Mezher agreed with Islamic Jihad. “It was a shocking and unexpected speech by the president to the people. The president is required to defend his people, provide them with international protection and seek strength through the Arabs and the OIC to face Israeli crimes,” said Mezher.

During an interview with Al-Monitor in his office, Mezher said that such statements make young people turn away from the president, the Fatah movement and the general national framework, and lean toward radicalism and extremism, which constitute a danger to Palestinian society.

Abbas has become surrounded by disgruntled and aggrieved people, first and foremost his archrival Mohammed Dahlan, who wrote on his Facebook page on June 18, “Fatah’s [security] agencies have been participating in the Zionist maltreatment of the Palestinian people in recent days. … This is happening due to a decision by Mahmoud Abbas, who never misses an opportunity to confirm his powerlessness and avoidance [of responsibility] under the pretext of attending a ministerial meeting in Saudi Arabia.”

In a phone interview with Al-Monitor, Fatah spokesman Ahmed Assaf defended Abbas’ speech. “Abbas is the elected president of the people, and his priorities are to protect his people and achieve their hopes of freedom. He has succeeded in isolating Israel, in putting it in the corner, in gathering international support and in obtaining UN recognition, which is considered a major achievement.”

Assaf argued that some are attacking the president to achieve their special interests or to serve partisan agendas, as Hamas is doing. “Hamas has a project that is opposite of the national project and is proceeding with the policy of exclusion, conducting coups and liquidation of political opponents by claiming that these opponents are agents and infidels,” he said. “[Abbas’] speech may not have been popular, but the president is responsible for his people, protect them and is a founder of the revolution. Perhaps he didn’t say what the people wanted to hear, but desperate slogans bring destruction.”

Responding to reports that parts of Fatah rejected the president’s speech, Assaf said that Fatah is a large and democratic movement, and therefore has various opinions, but Fatah is united around the president because it is convinced of his national position.

On the assault on the police station in Ramallah, he said, “The Palestinian police force includes martyrs and brothers. They are the sons of the nation. And therefore, when they are attacked, it serves Israel’s interests. Hamas is inciting against the security agencies to cause internal strife, which would benefit the occupation. This incitement must stop, or we would be heading toward a disaster and a coup like the one that happened in Gaza.”

Political writer Akram Atallah thinks that Abbas’ speech has cost him dearly. “[Abbas’] stature rose after he halted the negotiations, squeezed Israel into a corner, and put [Israeli Prime Minister Benjamin] Netanyahu, who was seen as a moderate, in international isolation. All of [Abbas’] opponents had their backs to the wall. He was at the height of his power. But that was before his last speech,” said Atallah.

He pointed out that the people in the Gaza Strip are perplexed. They are not satisfied with Fatah, but on the other hand will not shift their support to the resistance, which is suffering from a major financial crisis, adding, “There’s fear that the people would become frustrated with the entire Palestinian political system.”

He warned that the people in Gaza will not lend their support to the resistance, even after the president’s speech. But in the West Bank, his speech has caused a major shift. His speech came at a time when the people were suffering from barriers, inspection, settlement activity and a major invasion. Hamas has greatly benefited from this crisis, Atallah told Al-Monitor, asking, “Will this discontent lead to a coup against the authority of Abbas in the West Bank?”