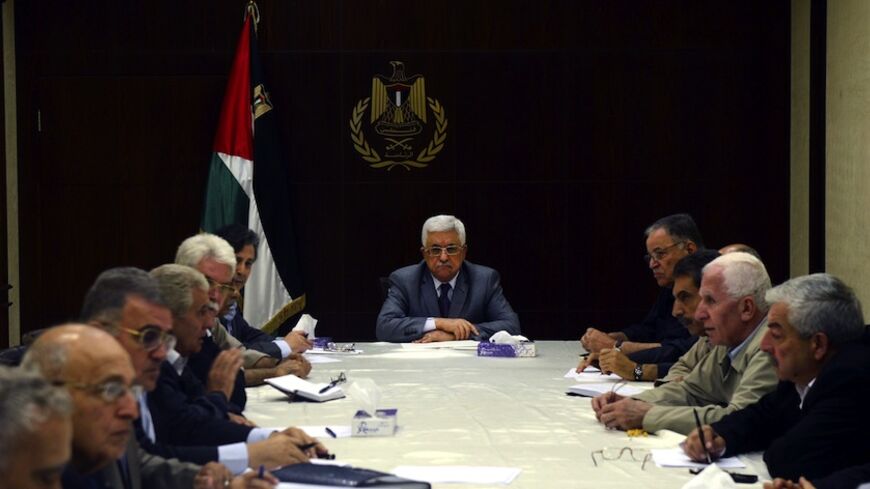 The current war on Gaza is sure to have some unexpected consequences. It will likely weaken the PLO-led Palestinian government and place in hibernation the PLO-Hamas reconciliation agreement.

For years, two contradictory strategies have been considered by the Palestinians. On one hand, the peace route has been endorsed by President Mahmoud Abbas, who has fought hard to keep it going, to ensure that security coordination with Israel takes place and at the same time sought to bring about change in Gaza through elections. On the other hand, Hamas and Islamic Jihad believe that liberation will only come by way of military resistance.

Abbas’ strategy ran into difficulties after the Netanyahu government refused to release the last tranche of veteran prisoners as part of the deal to conduct the recent peace talks, and increased illegal settlement activities. Nevertheless, Abbas kept hopes alive for some kind of intervention from the United States and the international community to get the talks back on track. But before this intervention took place, the Ramallah leadership faced a new problem with the kidnapping of three Israelis followed by the unsupported accusation by Israel that Hamas was behind it.

This led to the suspension of some aspects of the reconciliation, although the unity government has continued to work. Abbas’ strategy for Gaza was bent on the idea of a gradual change from the current Hamas’ military control to civilian control that would be determined through the ballot box. Elections were to take place at least six months after the start of the unity government in May.

While the international community largely welcomed the Hamas-less unity government, Israel has been vociferously opposed and seemed to have found a way to destroy the agreement by pinning the killing of the three Israelis on the Islamist movement. It is unclear where the relationship between Gaza and Ramallah will end up when the current war ends.

Hamadeh Faraneh, a former elected Jordanian member of parliament and a close adviser to the Palestinian leadership, told Al-Monitor that Abbas would become stronger after Hamas accepted the Egyptian cease-fire, which was the only game in town. He said that the international community and even Israel would want to have Abbas and the Ramallah-based government and security involved in Gaza, especially on the Rafah crossing. Faraneh said that the Presidential Guards, along with the European advisers, were likely to return to Rafah as part of the 2005 border crossing agreement.

Faraneh’s argument notwithstanding, recent developments have shown Abbas to be largely irrelevant with regard to what is happening in Gaza. His relations with Hamas, despite the unity government, have not given him the kind of leverage to curtail or stop the rockets coming out of Gaza. Fatah sources in Ramallah told Al-Monitor that since the war on Gaza began, few world leaders have actually sought the help of the Ramallah leadership because they know Abbas has no influence on Hamas’ military wing.

Short of a total Israeli occupation of Gaza, the current assault on Palestinians in the Gaza Strip will neither end the Islamist movement nor permanently stop the launching of rockets against Israelis. This eventuality means that Abbas still has few options, such as ending security coordination with Israel and pursuing membership of the International Court of Justice.

Those betting on the end of Hamas will be disappointed. Unless Israel carries out a full reoccupation of Gaza, Hamas will be able to leverage its military power to gain political importance. Without a political horizon, those supporting a military option will continue to gain importance and credibility.

Hazem Kawasmi, the chairman of the Freedom Forum in Palestine, told Al-Monitor that the assault on Gaza has blocked the possibility of a return to the peace talks. “The only realistic option left to the PLO [Palestine Liberation Organization] is to join the International Criminal Court, an act that will certainly anger right-wing elements in Israel, who will want to further weaken the Palestinian government.”

Mohammad Abu Arqoub, a professor at Bir Zeit University, told Al-Monitor that Palestinians would be faced with a difficult phase after the end of the Arafat-Abbas chapter. “Currently, there is still a sort of consensus around Abbas, but once he is gone from the political scene it will be difficult to find a leader who will be able to reach a minimum of unity the way Arafat and Abbas have,” he said.

Abbas’ Fatah movement is due to hold its seventh general congress on Aug. 4 in Ramallah. The congress is sure to usher in new leadership, mostly representing the inside population as opposed to what is often called the "Tunisian leadership," which came with Yasser Arafat after the Oslo Accord. Ironically, one of the leading figures who will compete for leadership, Jibril Rajoub, has good relations with Hamas. Rajoub, whose brother, Naif, is a Hamas leader in the Hebron area, forged strong ties with Hamas when he was in an Israeli prison.

Arqoub believes that the post-Abbas phase will witness much greater intervention by outside forces, especially Egypt and Jordan.

While the outlook doesn’t look good at present for moderate elements and the leadership of Abbas, the situation is not so bleak as long as the Ramallah leadership still holds the checkbook for Palestine’s largest group of workers: the public sector. But such leverage is not the basis for a national leadership that is hoping to be the lead party in fulfilling the national demands of millions of Palestinians who want to be free and independent.