Matthew Olsen, a senior US counterterrorism official, says it will not be possible to defeat the Islamic State without a new government in Syria that excludes President Bashar al-Assad. 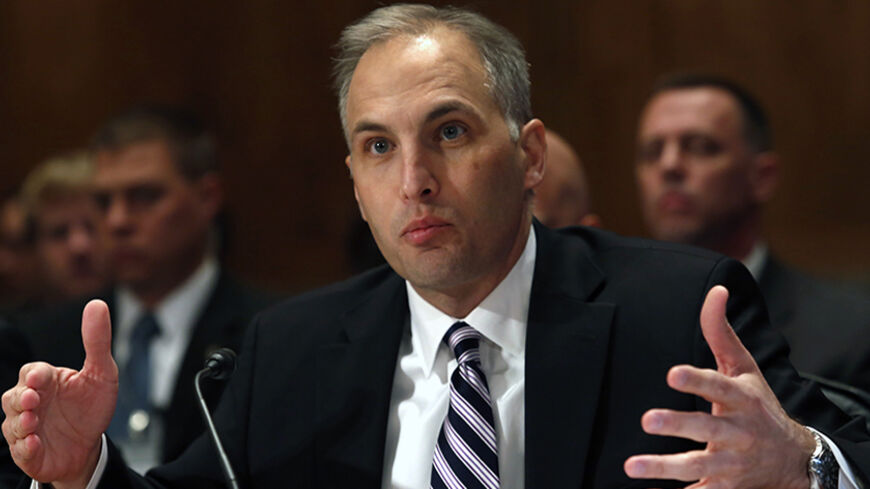 Matthew Olsen, the director of the National Counterterrorism Center, said Sept. 3 that the Islamic State (IS) “poses a multifaceted threat” to the United States but there was no “credible information” at present that the group was planning to attack in the United States or had a cell of fighters here capable of doing so.

However, in rare, wide-ranging public comments that followed the beheading of a second American journalist in Syria by IS, Olsen told a packed audience at the Brookings Institution in Washington that the terrorist group was “an extremely dangerous organization” that was “threatening to outpace al-Qaeda as the dominant voice of influence in the global jihadist movement” because of its territorial advances, financial resources and sophisticated propaganda.

Olsen also said, in response to a question from Al-Monitor, that IS could not be defeated while Bashar al-Assad remains at the helm of the government in Syria.

“As long as Assad is in that position — a ruler with no legitimacy in his own country — we have seen that Syria is a magnet for extremism,” Olsen said. “Part of the broader strategy over the long term is a political transition in Syria.”

Olsen’s comments seemed partly intended to counteract an impression left by President Barack Obama at a news conference last week that the United States lacks a strategy for dealing with IS, which grew out of an al-Qaeda offshoot in Iraq formed after the 2003 US invasion and which controls a Britain-sized chunk of territory spanning Iraq and Syria.

Since Obama’s comments, administration officials and the president himself have been at pains to explain that he was referring to the lack of a broad regional coalition as well as reliable ground forces that could justify extending US airstrikes from Iraq into Syria.

Obama, speaking earlier Sept. 3 in Estonia, said a coalition including Sunni countries would be required “so that we can reach out to Sunni tribes in some of the areas that ISIS has occupied, and make sure that we have allies on the ground in combination with the airstrikes that we’ve already conducted” and might conduct in the future. Secretary of State John Kerry and Defense Secretary Chuck Hagel are traveling in the Middle East later this week, in part for organizing such a coalition.

Obama said, “It is very important from my perspective that when we send our pilots in to do a job, that we know that this is a mission that's going to work, that we’re very clear on what our objectives are, what our targets are; we’ve made the case to Congress and we’ve made the case to the American people; and, we’ve got allies behind us so that it’s not just a one-off, but it’s something that over time is going to be effective.”

Asked by Al-Monitor if Iran could be part of the coalition given its hostility toward IS and contribution of weapons and advisers to Iraq, Olsen punted. “Obviously, Iran has interests in that region as well,” was all he would say.

Olsen said IS, while only one of a number of terrorist groups that have appeared in the last few years as offshoots of al-Qaeda and chaotic Arab uprisings, had benefited from the failure of the Syrian and Iraqi states to govern effectively and from the disaffection of Sunnis in both countries. IS “has proven to be an effective fighting force,” Olsen said, which “employs a battlefield strategy that is both complex and adaptive” and mixes terrorism with paramilitary assaults.

IS has also distinguished itself by surpassing al-Qaeda in the use of social media such as filming and distributing the horrifying videos of a British jihadist beheading American journalists James Foley and Steven Sotloff.

IS “disseminates timely and high quality content on multiple platforms,” Olsen said, while protecting its own private communications from Western prying through encryption and by avoiding the Internet.

In terms of the IS threat to the US homeland, however, Olsen said it was more potential than real. “At this point, we have no credible information that ISIL [another acronym for IS] is preparing to attack the US,” Olsen said.

He said his main concern was that an IS sympathizer “could conduct a self-directed, limited attack with little or no warning” but that such an attack would likely be “limited in scale and scope.”

US law enforcement and intelligence authorities are closely monitoring the movements of Americans and Europeans seeking to join the jihadist cause in Syria and foreign fighters trying to return to their countries of origin.

Olsen said of the more than 12,000 foreign fighters that US intelligence estimates have gone to Syria in the past three years, about 1,000 are European and 100 are American. He said the FBI has arrested “more than half a dozen” Americans seeking to travel to Syria. He also suggested that the United States was in much better shape to detect and prevent terrorist attacks in the United States than US officials were before Sept. 11, 2001 — in part because of the creation of organizations such as the National Counterterrorism Center, which are supposed to “connect the dots” of possible terrorist plots.

Since the United States counterattacked after 9/11, however, al-Qaeda has metastasized into a multitude of smaller groups. Terrorists are active in at least 11 insurgencies in the Islamic world, Olsen said, including Iraq, Syria, Pakistan, Afghanistan, Yemen, Libya, Somalia, Mali and northern Nigeria.

Among groups that threaten the United States directly, Olsen listed al-Qaeda's core based in Pakistan, al-Qaeda in the Arabian Peninsula (AQAP) centered in Yemen, and al-Shabab, which is based in Somalia and has conducted attacks that have killed Americans such as last year’s assault on a shopping mall in Nairobi, Kenya.

Even though al-Qaeda expelled IS earlier this year because of the latter’s extreme brutality toward other Muslims and religious minorities, members of al-Qaeda have traveled from Pakistan to Syria recently and IS pamphlets have been spotted in the Pakistani border city of Peshawar. Asked if IS might not assist in a revival of al-Qaeda and the Taliban in South Asia, especially as the US withdraws from Afghanistan, Olsen said the United States was aware of the possibility and would work to prevent that.

Bruce Riedel, an expert on Islamic extremist groups and a contributor to Al-Monitor, suggested that would be a major challenge and that al-Qaeda could be re-evaluating its expulsion of IS.

“Since the fall of Mosul, [al-Qaeda leader Ayman al-Zawahri] has said nothing about IS, Caliph Ibrahim or the American war in Iraq,” Riedel told Al-Monitor in an email. “That is very unusual for him and very intriguing. AQAP has called IS ‘brothers’ and offered advice on fighting drones. My guess is that AQ/[Zawahri] and AQAP want to avoid further public disagreements with what is a winning organization at least now.”

Riedel added that if the United States withdraws all its troops from Afghanistan after 2017 as “Obama has promised, AQ will be back with a vengeance.”