With the Islamic State drawing recruits from across Europe, the continent must act against the movement in Syria and Iraq before it's too late. 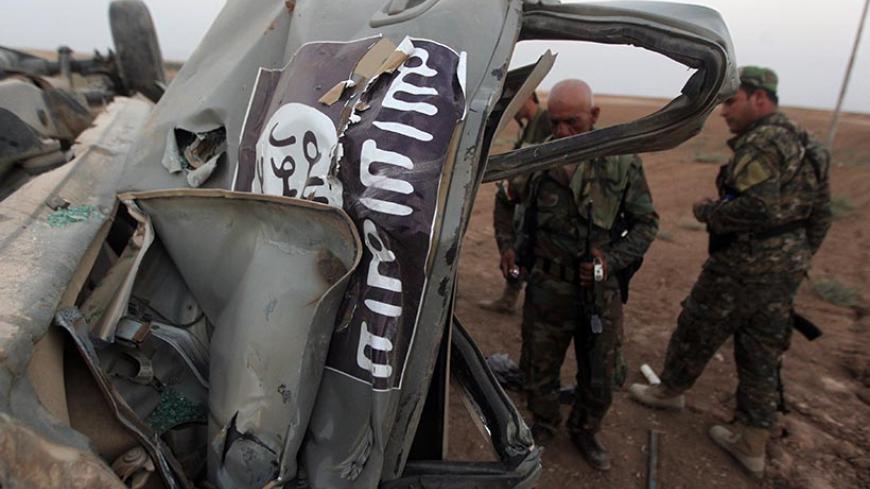 Peshmerga soldiers inspect the remains of a car, bearing an image of the trademark jihadist flag that belonged to Islamic State (IS) militants in Baqufa, Aug. 18, 2014. - AHMAD AL-RUBAYE/AFP/Getty Images

The progression of Islamic terror brings us to Jorge Luis Borges' writing. In his elegy “The Modesty of History,” the Argentine author wrote about the elusive nature of significant historic events. “I have long suspected that history, true history, is far more modest,” wrote the blind genius, “and that its essential dates may well be, for a long time, secret as well. A Chinese writer of prose has observed that the unicorn, for the very reason that it is so anomalous, will pass unnoticed. One’s eyes see what they are accustomed to see.” Borges went on to recall that the famous Roman historian Tacitus did not understand the Crucifixion, failing to grasp its significance at or around the actual time of the event.

The opening salvo of World War II was fired at Hitler’s failed 1923 beer hall putsch in Munich. At the time, the world reacted much like Tacitus did to the Crucifixion. It failed to notice it. World War III began with a boom on Sept. 11, 2001, when the world felt the first shot of global jihad. Nevertheless, over time, it preferred to ignore it or suppress thoughts of it. The Western world had forgotten the power of an unrestrained mass movement drunk on the successes of its brutality.

According to some estimates, Islamic State (IS) members now number as many as 20,000. The rate of people joining the movement is alarming. The percentage of people supporting it in the Muslim world and in Europe is horrifying. Its power, influence and draw are increasing with the speed of an untamed brushfire.

IS is jihad adapted to the age of the technological revolution. It is an amalgam of medieval ideas and 21st-century gadgetry. In effect, it is a closed circuit: IS makes clever, sophisticated use of technology as a magnet to attract young recruits, but it is also a product of the technological revolution. That is why it is so attractive, not only to Muslim youths, but to youths in general throughout the West.

IS is a dangerous, sadistic version of Che Guevara's appeal. It glorifies the anarchic warrior, whose pure ideals threaten the existing order in the West, an order that lacks spirit and meaning, an order that consists of credit cards and individual rights. That world is trapped in a spiritual vacuum and suffers from perpetual attention deficit disorder. It is a world that lives online, a world of computer games in which the heroes are gangsters. It is a world of hard-core porn for all and of TV series like "Game of Thrones," which sometimes almost appears to be the cinematic inspiration for IS videos. In such a world, a perverted, sadistic movement like IS is the real thing. It offers young Muslims, including some Westerners, a nihilistic, anarchistic adventure with pretentions of holiness in an amusement park of decapitations and rape. After all, young males have always been driven by testosterone and adrenaline.

In the 19th century, the West buried God somewhere, and since then all traces of him have been lost. God is alive and well, however, in the East, offering absolute answers to his devotees. Since the 1950s, the dominant ideology of the West has been a liberal one, especially among cultural and intellectual elites. This is an ideology that sanctifies individual freedoms and human rights to sometimes absurd levels. A malformed postmodernist discourse has inundated Western thought, blaming all the faults and failings of the developing world on Western colonialism and imperialism. While this approach is in the private sphere, it is equally valid in the international realm. From its perspective, there can be no crime that lacks justification in the perpetrator's eyes. The thief is a byproduct of a capitalist system, the rapist is a victim of sexual assault in childhood, and so on.

The same is true in the realm of international affairs. Jihadist terror is seen as a byproduct of the struggle by developing nations in general, and the Arab world in particular, against its historic oppressors. What is truly remarkable, however, is that of all places, multicultural Europe — a Europe that celebrates the saccharinity of multiculturalism, a Europe that opened its gates to tens of millions of immigrants — now lives in dread of IS emissaries and rightfully so. This year, maybe next year, we are likely to see a mass terrorist attack conducted by an IS alumnus in one of Europe’s capitals. That attack is certain to be filmed from every possible angle and edited into a lively, rhythmic video fit for any major network. As is so common in international relations, the actual schedule and the game pieces can be confusing.

How do young people from Europe arrive in the Syria of IS' proclaimed caliphate? By land, via Turkey. Yes, President Recep Tayyip Erdogan’s Turkey, the American ally and NATO member, is the crossing point, back and forth, between Syria and Europe. It's not up to US President Barack Obama alone to complete the job against IS. All of Europe must wake up. It must shake off its pacifist naphthalene and collect itself. The cancer must be amputated. Europe must find the strength to live.

As far as values go, the sanctity of individual rights does not supersede the most basic right to live. Only integrated action from within and without will remove the danger. A relentless war should be launched against IS in Syria and Iraq, and Europe must adopt a zero tolerance policy toward the group and its supporters. Otherwise, Europe will face unspeakable tragedy. The pendulum will swing from progressive inclusionism, which sanctifies human rights, to classical European nationalism. We all remember how that ended last time.