The Islamic State’s offensive against the Kurdish stronghold of Kobani came only days after the People’s Protection Units formed an alliance with local Syrian rebel brigades to confront the terrorist group. 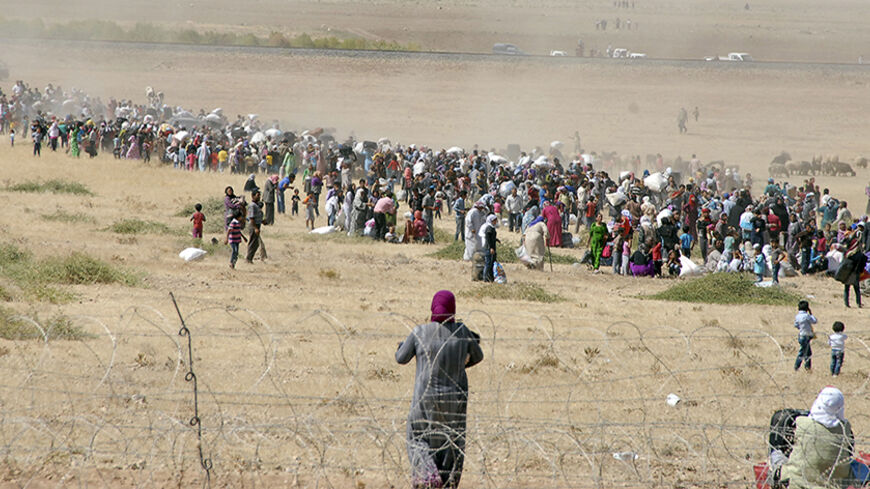 Syrian Kurds wait behind the border fence to cross into Turkey near the southeastern town of Suruc in Sanliurfa province, Sept. 19, 2014. - REUTERS

ALEPPO, Syria — The Islamic State (IS) attack on the area of Kobani — also known as Ayn al-Arab — on the Turkish border north of Aleppo raises a lot of questions about the ability of the Kurdish People’s Protection Units (YPG) to prevent IS from reaching one of its main strongholds, as IS sweeps through dozens of Kurdish villages.

The ongoing IS advance on the ground has also tested the newly formed Joint Operations Room set up Sept. 10 between the YPG and several rebel brigades. According to Amer Hasan, director of the Dawn of Freedom Brigades’ media office, rebel factions there “are doing their best” to support the YPG.

It seems that the new alliance provoked IS to launch a pre-emptive assault against Kobani days following its formation and amid US plans to provide more support for the “moderate Syrian opposition” to fight IS.

By Sept. 21, IS managed to overrun 64 villages. Kobani and the surrounding villages are thus fully besieged, and the city’s only outlet lies across the Turkish border.

IS control over dozens of villages has prompted residents to flee to escape the group’s brutality. Official Turkish sources said that the number of displaced Syrians who have entered Turkish territory has reached 142,000. But there are no camps set up to receive such a large number, and many of the displaced are now out in the open.

By the end of Sept. 22, YPG forces had suffered heavy losses, including the important cement factory in the Jubaila area, which was one of the most important funding sources for its parent body, the Democratic Union Party (PYD). IS has also taken the strategic hill of Tayarah, an area overlooking Kobani.

Fighting continued to rage as IS seized the villages of Barkh Batan, Sheikh Joban, Kara Mazer, Ruby and Donger Bejok.

In parallel with the battles in Kobani, several rebel brigades launched a joint offensive with three fronts against IS positions in the northern countryside of Aleppo, after the area had calmed several weeks ago, to support and ease pressure on the Kurds.

Along the demarcation lines in the Kobani countryside, YPG units are deployed along with rebels from the Dawn of Freedom Brigades, Jabhat al-Akrad (the Kurdish Front Brigade) and Liwa Thuwar al-Raqqa (Raqqa Revolutionaries Brigades), among other groups. Each brigade is responsible for the protection of a military post. When one post is attacked, other brigades move to support it.

However, IS holds an advantage with its large number of heavy weapons and tanks that they seized from the regime, compared to the light weapons carried by the YPG, in addition to the small number of rebels in Kobani.

Initially, it seemed that IS would continue advancing to the city of Kobani, after the battles moved to the “radio” hill, a short distance west of the city. IS tried hard to take the hill, but to no avail.

However, with the US-led coalition launching airstrikes on IS positions in Raqqa and Deir ez-Zor on Sept. 23, the intensity of the battles significantly eased around Kobani, according to a media activist in the city who asked to remain anonymous. No one — not IS forces, the YPG or the rebel brigades — advanced any further that day.

The activist told Al-Monitor that despite the lull in fighting one can still hear the IS announcing over loudspeakers, “Whoever walks in their house is safe,” and calling on the gunmen fighting them to surrender. Kobani is still threatened and IS could catch the YPG off guard at any moment with a surprise attack.

The individual roles of rebel brigades appear minimal, as small brigades from Manbij and Jarabulus joined in an alliance with the YPG after losing to IS. This reduces the importance and effectiveness of this alliance, the first of its kind.

The Islamic Front, Jaysh al-Mujahideen, Haraket Hazem and the Syrian Revolutionary Front, the most prominent factions in the ranks of the opposition, are not part of the Operations Room and do not have a presence in the Kobani canton. The relationship between some of these forces and the YPG remains strained, given the YPG’s ambiguous ties with the regime.

The Kurdish Future Movement accused the YPG of withdrawing from villages surrounding Kobani while showing “little resistance” to urge the international community to provide it with military support after forming an alliance with the “moderate opposition.” However, the number of Kurdish forces that have been killed and imprisoned and the loss of major funding sources for the YPG reduce the validity of such accusations.

Ahmed Hissou, spokesman for the Kurdish Front, an opposition faction seen as the link between the rebels and the YPG, denied that the YPG withdrew from Kobani villages without resistance. He told Al-Monitor, “They fought, along with the rebels, fierce battles against IS.” However, he pointed out that the sudden attack of the terrorists and the unexpected ferocity of the battles pushed them to withdraw “to rearrange the rows.”

Hissou said that the cooperation between the rebels and the YPG “has annoyed both the regime and Turkey” and pushed them to mobilize IS via “private communication channels” to attack Kobani and end the alliance.

He added, “The regime’s relinquishment of its barracks in Raqqa to IS such as the Tabaqa airport, among others, was a prelude to strengthening the organization so that IS could turn into a scarecrow for minorities. … The attack on Kobani is the result of this.”