The commander of the Islamic Revolutionary Guard Corps said that despite initial doubts, relations between the organization and the administration of President Hassan Rouhani have improved. 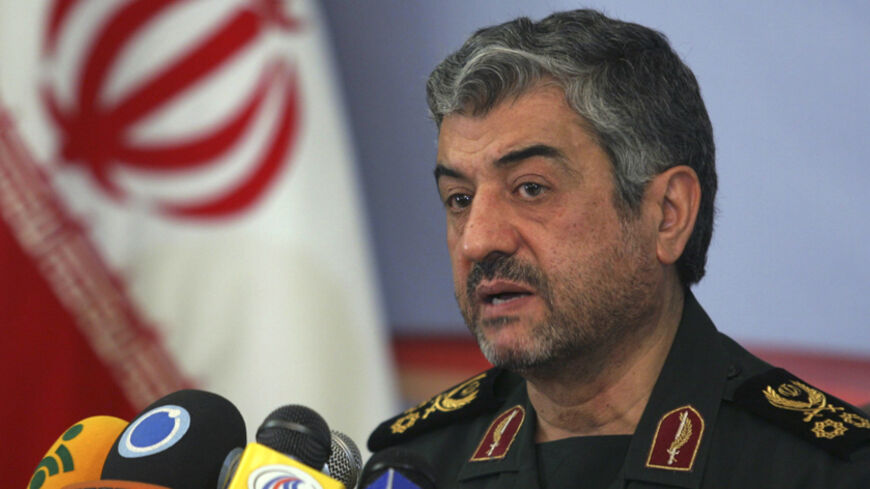 In a press conference yesterday, Sept. 17, the commander of the Islamic Revolutionary Guard Corps (IRGC), Mohamamd Ali Jaffari, spoke about relations with the administration of President Hassan Rouhani, Iran’s support for Iraqi groups in Amerli and Iran’s position on the US-led coalition against Islamic State group (IS).

When Rouhani took office in August 2013, one of his goals was to decrease the economic and also political role of the IRGC. Economically, the administration had planned for the IRGC to continue its large-scale industrial projects while smaller projects were passed on to the private sector.

Jaffari had previously said that the IRGC was ready to help improve the economy, and was critical that the administration had not taken the organization up on its offer.

On the US-led coalition against IS, Jaffari said, “Even if the Islamic Republic of Iran were invited to the meeting with Western and Arab countries to fight against IS in Iraq, there is no chance we would attend. In all, there is not much hope in this action because the Americans have taken this action to meet their own goals.”

Speaking of an American military air base in Erbil, Jaffari said, “This is not considered a threat for us. Iran has put direct threats behind itself. And as thoughtless as our enemies may be, we see the topic of a direct threat against Iran as unlikely. This [base] is more to help the Kurds of Northern Iraq, and how influential it is will be clear in the future.”

In regard to Syria, Jaffari said, “The indiscriminate spread of terrorists has created concern for their supporters. Although they are trying to weaken or stop groups like IS from taking power, they are strengthening others.” Jaffari did not specify which particular supporters he meant by this comment, but Iranian officials have accused the United States, Israel and Arab countries in the region of supporting armed groups inside Syria, including IS.

Jaffari also believes it is “unlikely” that the armed opposition groups will continue to spread inside Syria, given the current efforts of the Syrian armed forces.

On the possibility of the United States bombing IS inside Syria, Jaffari said, “The Islamic Republic of Iran supports the ruling system in Syria and in the political dimension, we condemn American actions. Of course, in all international rules, this type of bullying is condemned and we think America will regret it.”

Jaffari said that Iranians played an advising role in the operation to regain the Iraqi city of Amerli and that it was "the zealous and brave Iraqi forces" that were able to take back the territory.