In light of the deteriorating security situation, Iraq is facing a dire cultural reality, while the Ministry of Culture is engaged in building cultural houses and palaces. 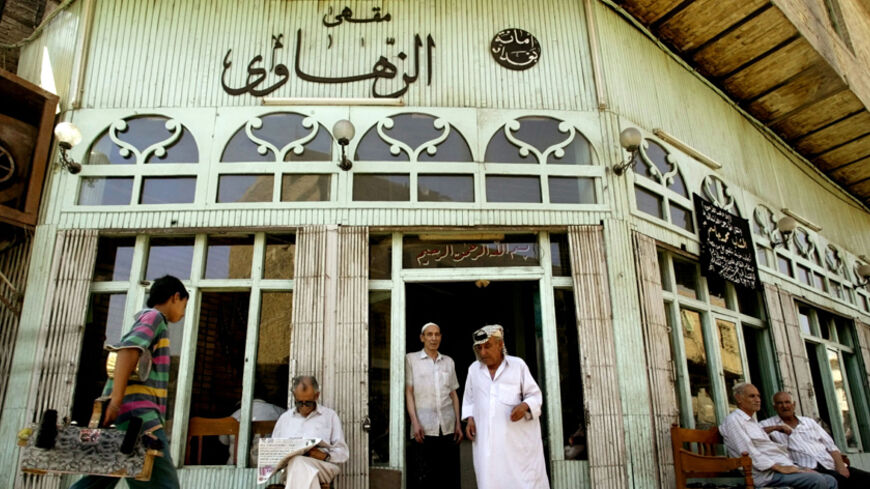 A view of the famous Al-Zahawi cafe, a meeting point for intellectuals and bohemians in Iraqi society at the beginning of the century, in central Baghdad, June 5, 2003. - REUTERS

Not only is Iraq plunged in political turmoil, but the country's cultural scene is also troubled. Iraq is rife with governmental corruption, underdevelopment, sectarianism and backwardness in scientific progress, which all come as a result of the absence of an active cultural role. Iraq’s culture is riddled with crises that have deprived it of the ability to influence and create change, while the voices of intellectuals and the cultured continue to be drowned out by thuds of violence.

Despite this, the Ministry of Culture believes that it is not failing in its duties and continues to implement projects according to pre-ordained plans. In a comment on this reality, the undersecretary of the Ministry of Culture, Taher al-Hamoud, said the deterioration of the cultural situation in Iraq partly rested on the shoulders of Iraqi intellectuals themselves, and that the administrative problems that have existed in the ministry since the Saddam Hussein regime were responsible for the situation. Meanwhile, Iraqi intellectuals do not believe that their ministry is offering solutions, and is itself part of the problem.

That one minister was entrusted with both the ministries of defense and culture in the former government is probably one of the reasons behind this cultural turmoil.

This was hardly surprising to Iraqis who see their government downplaying the role of the Ministry of Culture by not acknowledging the need to entrust it to one minister with full authorities. At the same time, the government underestimates the Ministry of Defense by placing it in charge of a person who has too many responsibilities to juggle simultaneously. Thus, many attribute the decline in performance in both ministries to this situation.

The Ministry of Culture has been making concerted efforts on the project of cultural palaces and houses, which are cultural centers under construction throughout Iraq’s provinces.

A cultural palace is usually built on a minimum of 3,000 square meters (32,399 square feet) and includes a theater, a movie theater and a hall for fine arts, fashion and handicrafts, whereas a cultural house consists of similar facilities, but is less spacious.

In a phone interview with Al-Monitor, Akil Mandalawi, head of the Cultural Relations Directorate at the Ministry of Culture said, “The [construction] cost of cultural palaces starts at around $12 million and goes up based on size. Forty-nine palaces and houses in the provinces have been built since 2005, while construction works are still underway to build 13 new palaces.”

Despite the high cost of the project, Mandalawi stressed the need to carry on with it. “Where would intellectuals hold their symposia? Where would they hold their theatrical plays? Where would artists display their paintings? Without such places, there would be no active cultural role. Therefore, the ministry will carry on with this project until it covers the entire territory of Iraq,” he said.

Meanwhile, Iraqi intellectuals believe that their needs are different from what the ministry has envisaged. They argue that Iraqi culture is currently locked in a war against the forces of extremism and darkness and the priority lies in protecting the culture from the threat of the forces that are hostile to it.

This disparity in views demonstrates the depth of the gap between the ministry’s vision of the reality and cultural priorities versus the intellectuals’ vision.

In a phone interview with Al-Monitor, Fadel Thamer, head of the Iraqi Writers’ Union attributed this problem to the absence of a cultural strategy. He believes that neither the Ministry of Culture nor the state possesses such a strategy.

Thamer acknowledged that the situation is more dangerous than what many imagine. He said, “We thought that the reason for the absence of a cultural strategy lies in the state’s preoccupation with hot security and political issues. However, after following up on the situation, we realized that this has been a trend, as the state is not in sync with culture. This is not to mention that some parties in power in Iraq are even hostile toward culture and seek to muzzle it and consider it apostasy.”

Those following up on the ministry's projects can clearly see that these projects are only based on works of rehabilitation and maintenance of tourist, religious or scientific facilities, or building new centers.

Meanwhile, intellectuals have been complaining of attempts on the part of extremist forces and parties to obliterate culture. Thamer stressed this fact, saying, "I am with the construction of cultural centers, but we are currently facing real threats by militias and extremist religious forces that are banning culture and some arts such as theater, music, sculpture and fine arts. There are many parties that pose a threat to our freedom of expression and writing and to our awareness. We want the Ministry of Culture to cooperate to save culture and intellectuals from this reality."

For his part, Mandalawi spoke of other projects by the ministry, such as the project to support cultural programs by offering financial rewards to the educated and cultured in return for their cultural production. He admitted that this project is flawed and is lagging behind — still being in the initial stage — and blamed cultural unions and organizations outside the ministry for this situation.

Nonetheless, Thamer shed light on a different reality. He said that the ministry is not interested in supporting real culture. "The writers union is facing threats by extremist parties under the pretext that it is a club that serves alcoholic beverages, while the ministry is not lifting a finger to take action," Thamer said.

In light of this deep gap between both sides, crises continue to intensify and intellectuals take it upon themselves to establish cultural organizations and associations to support their activities. This has caused culture to lose its ability to change, while it continues to isolate itself from its Arab environment, and being absent at the international level.

Given this dire reality, the most significant step to take is to draft laws that would guarantee the freedom of expression and protect the different freedoms and rights of intellectuals. However, this cannot be achieved unless the Ministry of Culture and intellectuals join hands and agree to cooperate together.