Despite criticism of the celebration of Baghdad Capital of Arab Culture, the events, which were attended by a majority of Arab countries, left a positive impact on Iraq and conveyed a message of peace to the Arab peoples. 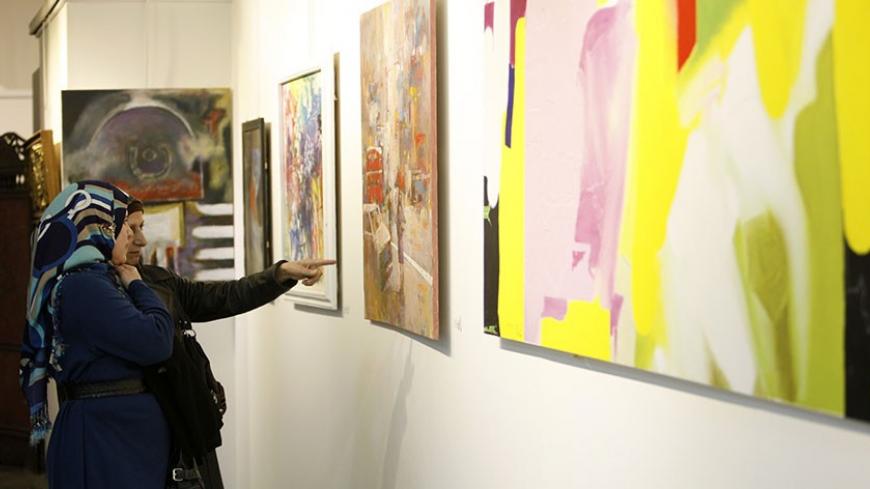 Visitors look at paintings during an art exhibition in Baghdad that was put on as part of its role as Capital of Arab Culture of 2013, Dec. 2, 2013. - REUTERS/Ahmed Saad

Culture and art have somehow managed to succeed where politics failed, so to speak. Iraq has recently brought together huge delegations from most of the Arab countries, at the invitation of the Iraqi Ministry of Culture, to participate in the closing festival of events for the Baghdad Capital of Arab Culture 2013.

The year-long and final events had been subject to criticism on social networking pages by a group of intellectuals, artists and journalists from Iraq, amid talk about financial corruption associated with the events, to which half a billion dollars was allocated. Despite the criticism, these events have positively and significantly affected Iraq, especially in a period when the entire Middle East is going through political changes that had, in some way, an impact on the cultural, artistic, literary and media landscape.

In the end, these events greatly contribute to conveying messages to the Arab peoples that are, in turn, contributing to those changes, including in Iraq. Indeed, Iraq has been witnessing over the last two or three years popular demonstrations, during which the people demanded their rights in a given case or challenged a certain governmental or parliamentary action that they deemed unjust. These actions are the fruit of the activation of the Iraqi people’s social culture. This new culture is still young and needs enrichment to reach practices within the framework of the freedom and democracy, away from sectarian and communal retrenchment, which is largely affecting the demography of many segments of Iraqi society.

Therefore, we must understand that communicating via these means is very important and can lead to significant and radical changes in the restructuring of the Iraqi people’s social culture. These people should be saved from sectarianism to focus instead on the negative aspects of the former regime, which was exterminated more than 10 years ago. This can be achieved through cultural, cognitive and intellectual exchange, as well as the exchange of experience in the fields of cinema, theater, television and other means of communication. In fact, these means are influential and their messages can be conveyed spontaneously, automatically and in a simple way.

This is why it was important for Iraq to sign several cultural and artistic agreements with most other Arab countries over the past year, as this will lead Iraq to further openness toward the Arab world.

Despite the fact that the Ministry of Culture has not officially announced all the cultural and artistic agreements that it concluded with the countries that participated in the events of Baghdad Capital of Arab Culture 2013, most of the people that Al-Monitor interviewed during these events mentioned those agreements, and said that their activities in Iraq will continue in accordance with these agreements.

These figures include the Egyptian charge d'affaires to Iraq, Nabil Makki, who said to Al-Monitor, “The participation in the Baghdad activities is only the beginning of a series of cultural and artistic events to take place in both Baghdad and Egypt.”

Moreover, these delegations sent letters of encouragement — which cannot be overlooked — to the rest of the Arab countries that did not participate in the events of Baghdad, out of fear of the security escalation across Iraq. One example is the statement to Al-Monitor by the head of the foreign relations sector in the Egyptian Ministry of Culture, Kamilia Subhi, who said, “I call on all Arab countries to come to Iraq, because we felt completely safe here.”

By “we,” Subhi meant the Arab delegations, knowing that their tour in Iraq lasted more than a week, during which the delegations — which included artistic, cultural and political figures — visited a fair number of the vital and important areas in the capital.

Hamid Mansour, a well-known Iraqi musician, confirmed this very message, but this time to Iraqi expatriate artists. As he told Al-Monitor, “All of these events that have been attended by Arab figures give the impression that there is an attempt aimed at reviving Iraq’s art and culture, which was overshadowed in light of the security situation and the turmoil that Iraq suffered and is still suffering from to this very day. Thus, Iraqi artists will encourage expatriates to contribute to those attempts, as some of them are still afraid to come to Baghdad.”

I do not disagree much with those who have made negative remarks about the Baghdad Capital of Culture events, but the door is wide open to make proposals to avoid these negative aspects. Those in charge of the cultural and artistic process will eventually resort to the elite, which ought to highlight potential that goes in line with the efficiency of the other party involved in the agreement.

It should be noted that the number of people, delegates and dignitaries who either attended or sent representatives to the festival have carried several messages that showed a considerable popular consensus among the peoples of the Arab countries. It was nice to hear a Kuwaiti poet praise the glories of Algeria, as Lebanese artists conveyed the Lebanese people’s hopes of a new dawn in the land of Iraq. Iraqi songs about all Arab countries, with no exception, were playing in the background, despite all the intersections and political differences between Iraq and some of these countries, including Saudi Arabia, which is implicitly accused by the Iraqi government of “financing terrorism in Iraq.”

During the final events of Baghdad Capital of Arab Culture, Iraq conveyed a message of peace that the Arab peoples are in dire need of during this current phase.