Hezbollah squeezed out of Golan by Jabhat al-Nusra, Israel

The infiltration of Syrian militants into Lebanon threatens Hezbollah’s presence in the strategic Golan Heights. 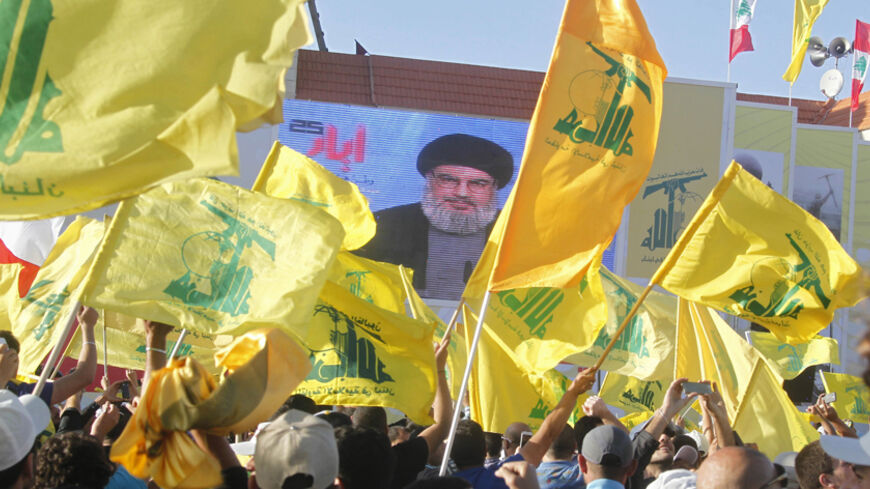 Residents watch Hezbollah leader Hassan Nasrallah on a screen during his televised speech at a festival celebrating Resistance and Liberation Day, in Bint Jbeil, May 25, 2014. - REUTERS/Sharif Karim

The Syrian opposition militants entering Lebanon’s southeastern corner are not Hezbollah’s only concern. There are three other consequences, equally serious and disturbing for the party.

First, Jabhat al-Nusra has taken control of the Syrian side of the border facing the Lebanese area of Shebaa, which is occupied by Israel, isolating Hezbollah from the Syrian extension in the Golan Heights. Hezbollah considers the area a strategic position in its conflict with Israel. After Syria maintained only weak official control over those quiet areas since the disengagement agreement between Syria and Israel in 1973, a series of military operations has lately targeted Israeli soldiers in the region.

Hezbollah’s Secretary-General Hassan Nasrallah announced in an April 7 interview that the party claimed responsibility for the first explosion, which was within the occupied Lebanese territories.

This area of continued action, which Hezbollah had guaranteed for itself — from southern Lebanon to the Syrian areas adjacent to the Israeli occupation — had formed a significant achievement at the military, moral and doctrinal levels. However, Jabhat al-Nusra’s control of the Syrian-Lebanese-Israeli triangle has put an end to this and prevented it from being used as a multidisciplinary card in the hands of Hezbollah.

Second, the Sunni fundamentalist gunmen’s control over this Syrian strip results in another change in the conflict between Lebanon, Syria and Israel: It isolates Hezbollah and its supporting forces in Lebanon and Syria from the As-Suwayda area, on the border with the Syrian Golan, but also to the east of Quneitra and Daraa, both of which were dominated by Jabhat al-Nusra militants.

The fact is that the Suwayda area, Jabal al-Arab or the Druze Mountain are predominantly inhabited by Syrian Druze, who are spread between Syria, Lebanon and the Syrian Golan Heights, occupied by Israel. These people are characterized by extreme coordination in their political positions and regional positioning in all three countries.

Moreover, Suwayda is known for its large number of emigrants who left Syria, especially to Western countries, and the help they send to their acquaintances constitutes a major source of remittances for Syria. These constitute a key element in the Syrian lobby outside Syria, which is still on good terms with the official Syrian authorities to date. Suwayda itself has a noticeable presence in the positions of power in Damascus, including Mansour Azzam, the Syrian minister of presidential affairs, and Luna al-Shebel, media adviser to the Syrian presidential palace and a former member of the Syrian delegation to Geneva II. Add to this a wide range of military leaders in the Syrian army, most notably officer Essam Zahreddine, who is one of the leaders of the Republican Guard.

Jabhat al-Nusra's control of the Quneitra area came to somehow separate Suwayda from Lebanon by shrinking the zone of influence had by Hezbollah and the Druze areas in Lebanon. It should be noted that there are clear understandings and alliances between the leaders of these areas and Hezbollah. This separation primarily leads to blocking geographic contiguity. Should this continue and circumstances get more complicated, then this could change the political attitudes and positions under field pressure and in light of the factual circumstances.

The third matter of concern emanating from Jabhat al-Nusra’s control over that Syrian area is related to media reports about some kind of substantive understanding between these militants and Israel itself.

All of these facts draw a disturbing picture for Hezbollah on two levels: on the one hand, the restoration of the “good strip” scene, established by the Israeli occupation in southern Lebanon for more than 20 years as a means of normalizing its occupation of the area.

On the other hand, there is the possibility that Israel has begun work on the composition of this strip, believing that the American/Western war against IS will stray and topple the regime in Syria and create an atmosphere of complete chaos in Damascus. This is what Israel is bracing for by establishing a fundamentalist Sunni strip on its borders, one that is able to isolate it from the more extreme Sunni fundamentalist groups that are less friendly to the Israeli state.

Between the Lebanese Shebaa territories, the occupied Syrian Golan and the Syrian Quneitra, which has been partly liberated in the 1973 war, it seems that there are major reasons for concern. And the rule in geopolitics could be that all the multiple-state triangles are susceptible to the most intense explosions.